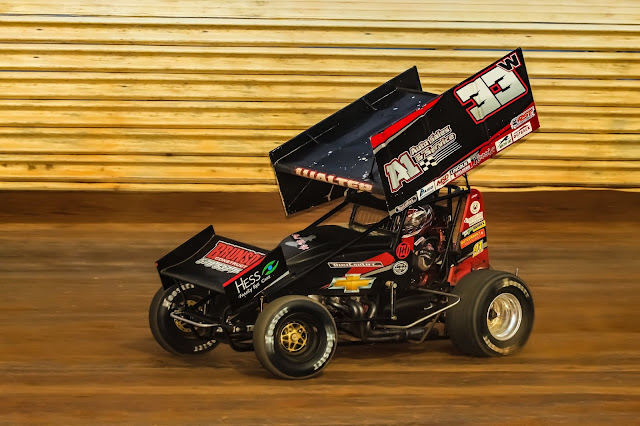 SELINSGROVE, Pa. Mason Ziegler of Chalk Hill looked like he was going to make his four hour tow payoff in a big way Saturday night at Selinsgrove Speedway but it was Rick Eckert of York who made a late-race pass on the 49th of 52 laps to take the win and $11,000 that was posted for the Ron Keister Memorial for super late models.

Keister, a rookie driver who was killed in April of 1976, was honored by the speedway and his family.

The victory was Eckert’s seventh career at the famed Snyder County half-mile oval.

Michael Walter of Selinsgrove scored his first career 360 sprint car win in the 25-lap feature that was worth $2,000.

Kyle Bachman of Selinsgrove capped off the night with his second win of the season in the 15-lap pro stock feature.

Selinsgrove Speedway returns to action at 7 p.m. next Saturday, May 25th, with the United Racing Club Jack Gunn Memorial for 360 sprint cars along with limited late models, pro stocks and roadrunners. Track gates will open at 5 p.m.

Starting on the pole in what was his first ever race at Selinsgrove Speedway, Mason Ziegler slid underneath Coleby Frye for the early lead in the late model race. The pair were followed by Rick Eckert, Randy Christine Jr. and Kyle Hardy.

In the early laps, Eckert got by Frye as Hardy followed. By lap 10 Ziegler had run into traffic and Eckert drew to his rear bumper.  Hardy and Greg Satterlee soon joined the front runners.

Ziegler continued to slice through traffic while Eckert, a former World of Outlaw Champion stayed in contact but did not pressure him. Satterlee got by Hardy for third and was soon tracking down Eckert.

With the first 41 laps run without a caution, a planned competition yellow was thrown to allow for an 11 lap shootout in honor of Keister’s former car number.

The cars restarted using the Delaware restart with Ziegler choosing the bottom lane.  As Ziegler took off, Dylan Yoder used the restart to drive into third.  Eckert stayed glued to Ziegler’s bumper and tried to test him high but on the 49th lap Ziegler came off the fourth turn high.  Eckert drove low and into the lead.

Almost immediately the caution came out as Jeff Rine, Ken Moreland, Jim Yoder and Shaun Jones got together in the third turn.

After a lengthy caution because a bumper got caught in the guardrail the race resumed for a green-white-checkered showdown.

Eckert checked out winning by .448 seconds over Ziegler, Yoder, Satterlee and Jared Miley.

Mallie Schuster rocketed into the sprint car lead from the pole position. He was followed by Derek Locke, Michael Walter, Jason Shultz and Kyle Reinhardt.

Locke took the lead on the next go around and the race was cautioned on lap three for a spin by Dave McGough and Jim Schuster.

Walter, Schuster, and Shultz raced the next lap three wide before Walter grabbed second and Schultz settled into third.

Shultz running low and Walter racing high in a side by side race allowed Locke to open a lead by over four seconds when he slowed and pulled off the track on lap 19.


“I saw him go low and pull in.” Walter said.  “My engine was getting hot and I was hoping it would hold up just a few more laps. We’ve tried and failed so many times it feels great to win this one.”

Walter was followed by Shultz, Layton, Reinhardt and Mallie Schuster.

The win was Walter’s first at the speedway after starting his career on the 1/5th mile inner oval and the third generation of his family to race at the speedway.

Sprint car heats were won by Locke and Layton

Bachman pulled even with Lawton and the pair ran side by side until lap eight when Bachman inched into the lead.

A last lap caution for Dawson and Wayne Shaffer bunched the field on Bachman’s rear but the defending track champion won his second race of the season over Moser, Lawton, Hoffman and AJ Stroup.