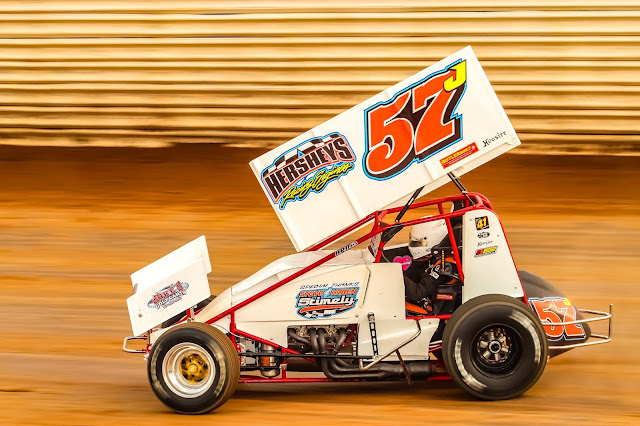 PORT ROYAL, Pa- They say the first one is the sweetest! Jeff Miller held off a hard charging Lucas Wolfe and Mother Nature to pick up his first career Weikert's Livestock 410 Sprint Car victory in his rookie season Saturday night at 'The Speed Palace'.

"I started racing go-carts when I was five and this is what I always wanted to do. I can’t believe it happened this early," said an excited Miller in victory lane.

With rains in the forecast, Speedway officials moved up the start time an hour early for Bobby Rahal Toyota of Lewistown Ladies Night. And throughout the night rain would spit from the sky, threatening to cancel the final track time for the cars prior to the Weikert Memorial in two-weeks.

However after persistent effort and the track and teams moving the program along, Justin Whittal and Miller would lead the 410's to the green for an all Rookie front row. Whittal jumped out to the early lead over Jared Esh, but racing action was halted when Dustin Baney got upside down in turns 1 and 2 before ever completing a lap.

When racing activity returned, Whittal once again jumped out to the lead, this time with Miller in tow and Esh in third.

As Whittal was stretching his lead, Dylan Cisney was an early mover, sliding into 4th on lap 5. One lap later, Miller would take the lead, powering under Whittal down the front stretch and taking the point at the flagstand.

"After warmups, I really didn’t have a clue what to do with the car," said Miller. "I started adjusting the wing and I think it really helped me out there."

Miller started to check out. Meanwhile on lap 9, Esh moved alongside of Whittal going down the backstretch and took the second position.

Wolfe, who started seventh in the feature, began to make his move towards the front on lap 10, cracking the top 5 and moving past Cisney for 4th a lap later.

Meanwhile, Miller hit lap traffic on lap 12. As he rode the top of the speedway, Mother Nature also began to show her muscle, as persistent drops fell from the sky.

Wolfe slid Whittal in turns 1 and 2 on lap 14 and 4 laps later used the top of the speedway coming out of turn 2 to power under Esh entering turn 3 to move into the second position.

On lap 21, Miller would struggle with passing the lap cars of Trenton Sheaffer and Adrian Shaffer, allowing Wolfe to close within a car length of him.

Both leaders cleared the lap cars and over the final 3 laps, Miller would stick to the top of the speedway while Wolfe ran a line lower in turns 1 and 2 and attempted multiple runs through the center of speedway in turns 3 and 4.

However, with a slick racing surface due to rains, Wolfe couldn't make it stick. He'd try one final time in turns 3 and 4 of the final circuit, pulling alongside Miller, however Miller powered off the top of the speedway to win his first career 410 Sprint Car victory by a margin of .292 seconds.

"We decided to do this deal this season and this is really a family thing, but we are learning every week," said Miller, who previously ran in the 305 Sprint Car ranks. "This is really a dream come true and I'm really just speechless."

Tim  Wilson and Dillan Stake started on the front row for the feature, with Wilson jumping out to the early lead over fourth starting Mike Lupfer and Stake.

On lap 2, Knaub would begin his march to the front, passing Stake in turns 3 and 4 for the 3rd position.

Over the next several laps, Wilson looked to be in command as he stretched his lead over Lupfer and Knaub. On lap 11, Knaub used some momemtum coming out of turn 2 to power under Lupfer for the second position on the backstretch.

However, Colton Flinner was turning heads using the extreme high-line of the speedway to move forward from his tenth starting position, cracking the top 5 on lap 11.

As Wilson attempted the pass the lap car of Scott Flickinger on lap 12, both Knaub and Lupfer were on the tail of the leader. After clearing the lap car, Knaub used the middle of turns 3 and 4 to pull alongside of Wilson and take the lead at the flagstand.

There would be no looking back for Knaub. Yoder would move into the second place on lap 20, however Knaub would take the $2000 winners share and the 25-lap checkered flag by 2.108 seconds over Yoder, Wilson, Gary Stuhler and Lupfer.

"We really struggled there in the beginning, however I'm really blessed to drive a great racecar," said Knaub of his victory. "We always look great early in the night and by feature time we just don’t have it. Just thankful to be in victory lane tonight and to beat the rain."

Jones and Duke started on the front row, with Duke getting the lead on the start. Racing action would be slowed when Dave Grube slowed to a stop on the speedway on lap 3.

Once again, Duke took the lead at the green flag with Jones in tow. The front 2 cars jumped out to a huge lead before Nick Sweigart got into the wall in turn 3 to bring out the caution on lap 5.

Duke would again jump out the lead at the restart and him and Jones would set a blistering pace. Clearly the class of the field the two got out to a nearly 5 second advantage to the third place car. Jones would attempt to make it interesting over the final laps of the race, however he wouldn’t have enough to best Duke as he claimed the checkered flag by an advantage of .551 seconds.