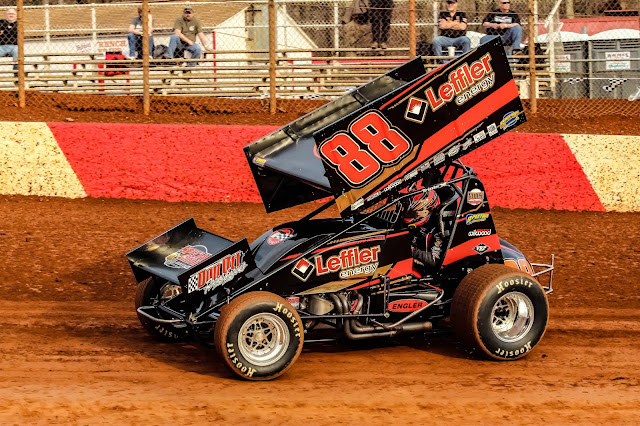 Abbottstown, PA (May 4, 2019) – After pushing the start time up two hours to 5:30PM on Saturday to try and avoid what Mother Nature had coming, the rain came earlier than expected and forced the postponement of both the 410 Sprint and 358 Sprint features. With a field of 10 cars, the Extreme Stocks got their 20-lap feature only event in the books.

The 410 Sprint Car feature is slated to be made up next Saturday, May 11 after the completion of the regularly scheduled program.

The make-up feature for the 358 Sprint Cars is scheduled for Saturday, June 1.

The York Flooring Kid’s Big Wheel Races will be held on Saturday, June 8.

Before the rain came the 410 Sprint heats were won by Robbie Kendall, Cole Young and Scott Fisher.

Travis Horan started fifth in the 20-lap Extreme Stock feature on Saturday night. Horan was up to third from his fifth starting spot by lap 3. Lap 3 also saw Bill Powell take the lead by a nose at the flag stand from Donnie Broderick.

Broderick shared the front row of the feature with pole-sitter, Alex Updegraff. Broderick got out to the early lead as Powell and Horan started to make their way through the field. Powell nearly had Michael Smith beat to the line for third on the first lap after starting sixth but settled for fourth. Powell got by Smith for second on the next lap and got around Broderick for the lead on lap 3.

With Powell in the lead, Horan started to go to work on Broderick for second. Horan took the spot from Broderick on lap 5. Smith and Broderick went to battle for third with Smith getting loose out of turn 4 on lap 11. Smith got spun around on the front stretch bringing out the caution.

Powell lead the field to the cone on the restart with nine laps to go. Horan tried the bottom of turns 3 and 4 but couldn’t steal the lead from Powell. Don Murphy fell off the pace with a flat tire that left debris on the track bringing out the caution.

There were some great battles for position throughout the field. Andrew Hogue was up to fourth on the restart and was working on Broderick down the backstretch for third. Updegraff entered the picture and got under Hogue for fourth on lap 13. Two laps latter Updegraff got under Broderick for third in turns 1 and 2.

Powell and Horan had separated from the rest of the field when a smoking Powell pulled into the infield on lap 17. Horan inherited the lead and held onto it until the checkered flag dropped. Updegraff held onto second. Broderick crossed the line third. Hogue beat Smith to the stand by inches to finish fourth. Smith rounded out the top five.