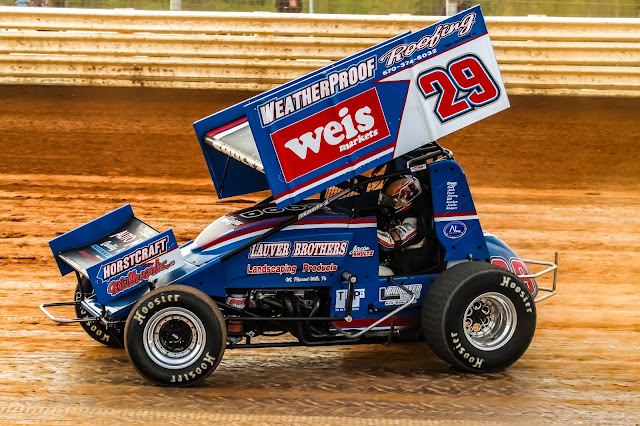 SELINSGROVE, Pa. - Jason Shultz of Carlisle won the 25-lap 360 sprint car feature from the 16th starting spot at Selinsgrove Speedway Saturday night. The victory was Shultz’s second of the season and 20th career at the Snyder County half-mile oval.


Brett Schadel of Herndon was victorious in the 25-lap late model race.  It was Schadel’s third career win in a super late model at the speedway. Both Shultz and Schadel received the top prize of $2000 for their victories.

The Selinsgrove Speedway will be back in action at 7 p.m. next Saturday May 18, when the super late models will race 52 laps in the Ron Keister Memorial paying $11,000 to win out of the huge $40,000 purse. The 360 sprint cars and pro stocks will also be in action. All track gates will open at 4 p.m.

For the second week in a row a shower started as the sprint cars were pushed to the speedway. The cars returned to the pits as it showered harder.  Like they did last week the track crew went right to work and saved the track.

Mark Smith split the front row starters to rocket to the front of the sprint car feature followed by Cody Keller, Kyle Reinhardt, Derek Locke and Michael Walter.  Curt Stoup brought out the caution on lap eight when he slowed on the speedway.

Reinhardt got a great restart and took second from Keller but the field was again slowed on lap 11 when Ryan Kissinger and Locke stopped on the track.

The restart saw Jason Shultz get by Keller and immediately pressure Reinhardt.  Shultz moved into second one lap later and started to track down Smith.  “We really got a good start on the second one.”  Shultz stated.   “We could go high or low.”

Smith looked unbeatable but in the final laps a puff of smoke ended Smith’s evening as he stopped on the back stretch handing the lead to Shultz.  Shultz led the final circuit winning by .495 seconds over Reinhardt, Keller Chad Layton and Walter.

“When I saw the smoke coming out of Mark’s car I knew it was not good.  I just wanted to be in a different lane in case something happened.”  Shultz said.  “It’s too bad for Mark but we’ll take it.”

Donnie Schick led Brett Schadel into the first turn at the start of the late model feature.  The pair were followed by Jim Yoder, Bryan Bernheisel, Jeff Rine and Colby Frye.

Schadel passed Schick on lap four for the lead and Bernheisel followed into the runner up spot.

“Randy (Keister) guessed right and put on a soft tire.” Schadel said.  “We knew Colby (Frye) and (Jeff) Rine would go a little harder.  We wanted to get the lead early and try to hold them off.”

A lap nine restart gave Rine a shot at Bernheisel which he used to grab second.  Frye soon followed into third.   Frye and Rine entertained the fans with some high speed cat and mouse as Schadel continued to lead.

Frye and Rine raced lap 20 side by side before Frye grabbed second.  A lap later Rine was back underneath but Frye used a lapped car as a pick to maintain second.

The battle for second played into Schadel’s hands as he rolled to .84 second win.

“By lap nine our right rear tire was shot.” Schadel continued. “I used the cushion to turn the car.  The track was great tonight.”

Lori Croop took the pro stock feature lead from the pole position and was followed by Shaun Lawton, John Troxell, Tommy Dawson and Brandon Moser.  By the third lap, Lawton had taken the lead with Moser on his tail.

Making his first start of the season AJ Hoffman was soon in third and joined the battle for the lead.  As Hoffman and Moser traded slide jobs, Lawton opened the lead.  Once Hoffman was clear of Moser he quickly tracked down Lawton when the yellow came out on lap 10.

Hoffman used the restart and the high side of the speedway to take the lead.  One lap later, Moser followed into the runner up spot. Moser tested Hoffman and found some grip coming off the second turn.  He shot around Hoffman going into the third turn and came off the fourth turn with the lead and the win.  Hoffman, Lawton, Kyle Bachman and Cory Long rounded out the top five.

Jake Jones took the lead on the final lap over Will Brunson to win the roadrunner feature.  Curtis Lawton, Jason Zook and Bob Bussey rounded out the top five.  Jones had also won last night in a kart on the inner Selinsgrove Raceway Park oval.