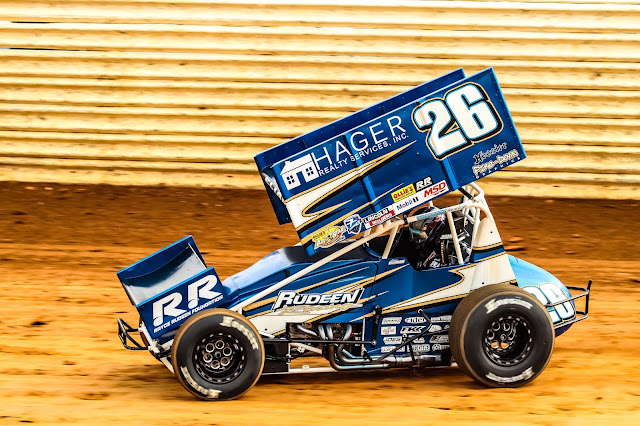 YORK HAVEN, Pa.: Cory Eliason knows how difficult it is to come to central Pennsylvania and win in the 410 Sprint Car division.

It’s not only the stiff competition, the tracks are also different. There are few, if any, tracks in California — Eliason’s home state — that can prepare you for the surfaces in this region.

And yet, Eliason’s made the proper adjustments. That was evident Thursday night at racy BAPS Motor Speedway.

Eliason invaded and conquered the tricky surface and claimed the Greg Hodnett Foundation Race. Even more impressive, he won the 27-Lap main event and $4,000 on only six cylinders.

“It’s tough, especially coming to Central Pa.,” Eliason said. “I came here last year to Port Royal, and boy, they absolutely whooped me. We were just kind of average in the back getting our bearings straight.

“Then, we come back to the Grove with the Outlaws, and we were horrible. To get a win in Central Pa. is amazing, especially this early with only being here twice.”

Continued Eliason, “I’m good friends with Lee Stauffer, and he said to me, ‘Man, I really hope you win it.’ I guarantee you that I have a missed call from him, because he’s going to be ecstatic we just won this.”

Eliason lined up fourth on the grid and wasted little time getting to the front. He went to the high side of Turns 1 and 2 and blew around Gerard McIntyre Jr. and Jordan Givler to take the runner-up spot.

Sixth-place starter J.J. Grasso was also on the move early. The New Jersey driver rocketed around the outside of the first and second corner on Lap 2 to drive past Givler and Danny Dietrich to take fourth.

While the field was settling into running positions, Eliason wasn’t satisfied. He caught and passed leader Cory Haas on Lap 3. One lap later, Haas slowed and headed toward the infield with mechanical problems.

Eliason set a blistering pace. The frontrunners started to encounter lapped traffic on the eight circuit, and he opened a 2.545-second advantage. Two laps later, Eliason started to struggle a bit, and McIntyre was able to close to within .845 seconds.

Dietrich started to flex at the front of the field on Lap 12. He shot by Grasso for third in Turn 1 and went in hard to Turn 3. It was too much, and Dietrich washed up in front of the fast-closing Grasso, and contact was made. The Gettysburg driver spun to bring out the caution and tagged the rear.

The field went double-file for the restart, with Eliason picking the outside. He broke out front and opened up a 3.346-second lead over the field by Lap 16, blasting around the top of the track.

Grasso, meanwhile, took second from McIntyre and started to track down the leader. Eliason slowed down, and the lead was cut to 2.979 seconds by Lap 20 and 1.311 seconds when Anthony Fiore flipped hard at the end of the frontstretch. He was OK.

“With 11 to go, we broke a plug on one side and lost a plug wire on the other side,” Eliason said. “So, I was on six cylinders.

“I rolled my wing all the way forward, and I’m like, ‘Oh, God, this thing is blowing up.’ I wasn’t stopping. I was told, ‘As long as you’re leading and think you can win, do not stop.’ Engines are replaceable, but wins are hard to come by, especially with the talent we have nowadays.”

Eliason was a sitting duck on the restart, at least it seemed that way. He lined up on the bottom and got enough of a good start to maintain the lead going down the frontstretch, but it wasn’t Grasso in tow.

Brian Montieth, who started seventh, drove on the inside of Grasso. He executed a monster slider through the first and second corner to take the lead, but Eliason dipped low out of two and retook the spot going down the backstretch.

Eliason drove into Turn 3 on the cushion, and Montieth went for broke. The Phoenixville driver blew through the corner and passed the leader, but he got over the cushion on exit, which allowed Eliason to duck under and lead Lap 25.

“I could hear him, and I knew how much speed he had when he did it in one,” Eliason said. “I went into three right on the curb. I got real tight and turned off it, because I knew he was going to be coming.

“Thank, God, he opened it up more than he wanted to and caught the curb, which made him jump. At that point, I knew I was safe, because it was going to take more to rebound off it than if it was just a slider.”

Eliason was safe, and he cruised the rest of the way for the win, beating Montieth to the stripe by .826 seconds.

Kenny Edkin carved his way through the field to capture his fourth win of the season in the 25-Lap BAPS Super Sportsman main event.

Edkin started 10th on the grid and made a strong move to the front through the early stages of the race. He was running in the top five by the end of the fifth circuit and tracked down leader Justin Foster on Lap 9.

Once out front, it was all Edkin, who took the win and the point lead. Frankie Herr, Foster, Scott Dellinger, and Mike Enders completed the top five. Edkin, Paul Miller, and Dellinger were heat winners for the 24-car field.