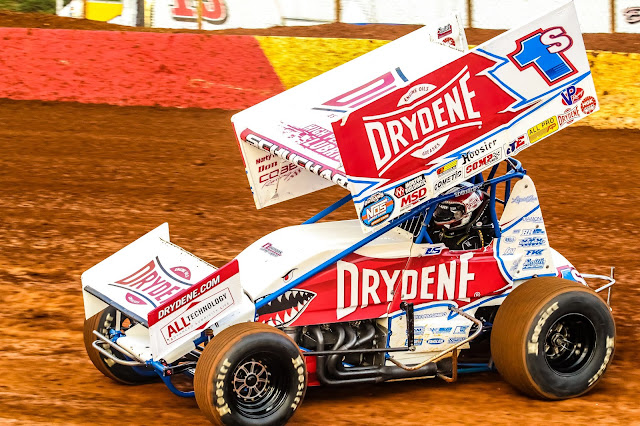 With his grinning shark teeth painted helmet in one hand and the checkered flag in the other in Victory Lane at River Cities Speedway Friday night, Logan Schuchart accomplished more than just another win.
He did what no World of Outlaws NOS Energy Drink Sprint Car Series driver has done since 2014 – win more races than 10-time Series champion Donny Schatz a third of the way through the season.

By claiming his fourth win of the season at the Grand Forks, N.D. track, Schuchart is now the winningest driver this year. Schatz and David Gravel are behind him with three wins each.

“To lead the Outlaws in Series wins this time of the year is a pretty cool accomplishment, for where you look at where this team was six years ago and how it started and where we’ve come,” Schuchart said.

Last year, the Shark Racing driver had two wins in total for the season. He won four races in total in 2017 but has yet to surpass that number in a single season. He’s knocking on the door to beat that record now – especially with his performance on the 3/10-mile track to claim his 12th career Series victory.

He started the night winning his Drydene Heat race and then won the DIRTVision Fast Pass Dash.

In the 40-lap Feature, Schuchart did not favor sharing the lead. The record book will show he led every lap. However, Gravel and Australian James McFadden have stories that say otherwise.

At the start of the Feature, Schuchart was a shark racing minnows. He pulled away from second-place Brad Sweet by almost a straightaway, leaving the top-five to figure out their running order as they swapped positions lap after lap. Some cranked their car sideways to the bottom of the track, while others tempted disaster by riding the outside rim of the turns, hoping to not slide off track and down the steep embankment on the other side.

Hope was not enough to keep several drivers on track. Carson Macedo brought out the first of seven cautions by going off track in turn three. On the restart, Gravel went from fourth to second in the first turn, while Kasey Kahne Racing teammates McFadden and Brad Sweet battled for third.

Running the high side, Gravel found enough traction to eat into Schuchart’s lead, getting to his outside by Lap 15. However, before he could attempt a pass. Another caution for a car going off track.

On the following restart, Gravel launched ahead of Schuchart, taking the lead and pulling away to a two-car length lead. It was short lived, though. Exiting turn two, Gravel slid off the corner allowing Schuchart to dart back by him.

The lap went to Schuchart. There was no sharing the lead.

“It’s tough when you’re leading to be able to tell where to go, when the rubber or where the rubber’s coming in,” Schuchart said. “Actually, in the beginning, when Dave got around me, I knew he got a run from the top of three and four, but it actually wasn’t totally rubber, yet. I knew he had to get a run from the top, so I moved up in three and four and I wasn’t going to move my line in one and two until I saw somebody or heard somebody.”

While Schuchart put distance between himself and the top-five once again, the KKR teammates were now battling for second – continuing their spectacular battling from Tuesday night’s race at Fairbury Speedway.

Riding the low line of the slick track, McFadden found enough traction to pull ahead of Sweet and begin his march toward Schuchart.

Round two of Schuchart versus McFadden, after the two raced for the win a couple of weeks ago at The Dirt Track at Charlotte. Schuchart won that battle.

McFadden ran Schuchart down. He could stay on his bumper, but couldn’t find a big enough run to get by the Hanover, Pa. driver.

Then, on a restart with 13 laps to go, McFadden found that run. He launched pass Schuchart on the outside and sailed away. This time, it looked like Schuchart would have to share the lead. But before McFadden could complete the lap, another caution.

McFadden showed his hand. Schuchart now knew what he had to do to win.

When the race went back green, McFadden could keep Schuchart close enough in sight to read the sponsors on his car, but never garnered enough of a run again to get back by him.

“Once Logan’s out front on that kind of track, he’s probably one of the best guys at racing that,” McFadden said. “I think he was holding back, trying not to get to lap traffic, thinking if he didn’t make a mistake, he wasn’t going to get past. I was just sitting there waiting, and hoping, and it didn’t happen. Still happy with second.”

While Schuchart claimed his fourth win this season, Sweet, who ended up third, earned his fourth podium finish in-a-row.

“We’ll keep plugging away,” Sweet said. “As long as we’re standing on the front stretch each and every night, the wins will start coming.”

Sweet, with two wins this season, continues to sit second in points to Schatz. But with Schatz finishing fourth, the Grass Valley, Calif.-native gained two points on the reigning champion and is now 36 points behind him.

Being the winningest driver, so far, this season has injected Schuchart with pride and confidence. Although, the amount of wins he has won’t mean anything if he can’t find consistency. His performance this year has left him fifth in points — 202 points behind Schatz.

“It seems one night we win, the next night we’re fifteenth,” he said. “We’re going to keep working at it, try to figure it out and hopefully pick up some more wins.”

The World of Outlaws will continue its tour through the Northwest on Saturday, June 8, at Granite City Speedway in Sauk Rapids, Minn.