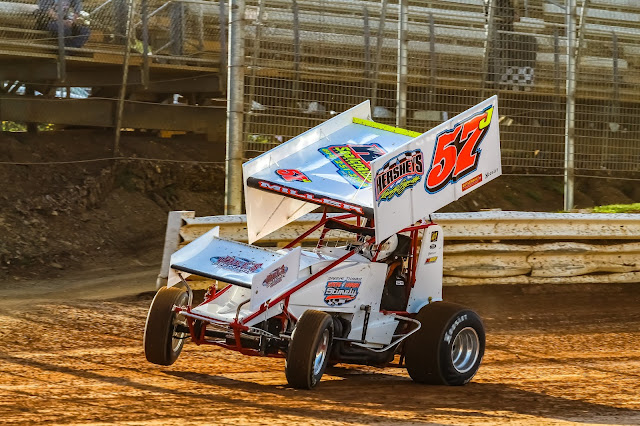 PORT ROYAL, Pa- Jeff Miller doesn’t want to be a one-hit wonder. When he won his first Weikert's Livestock 410 Sprint Car victory at Port Royal Speedway about a month ago, many were surprised.

But Miller is full of confidence and wanted more. He backed it up by winning again Saturday night during Glick Fire Equipment Juniata County Fire and Rescue Nigh tbesting track point leader Logan Wagner and last weeks winner Lucas Wolfe.

"The last couple of weeks didn’t go as planned and we changed the car around almost 180 degrees," said Miller, a rookie in the 410 ranks this season.  "This is the same car we won with earlier this season and wow what a difference we saw tonight."

Another rookie, Tyler Walton, and Ohio native Jack Sodeman led the field to the green flag with Walton jumping out to an early lead using the outside of the speedway in turns one and two to grab the point.

One lap later, Miller began to make his move as he passed Sodeman in turn 3 to move into the second position. The following lap Miller slid Walton in turns one and two to take the lead and he began to check out from the field.

Meanwhile things were getting dicey throughout the field. Sixth starting Jared Esh moved by Walton for the second position in turn three on lap 4, while ninth starting Logan Wagner made a daring move the following lap to go from sixth to third in turn one on the bottom of the speedway. Lucas Wolfe would pass by Wagner on the backstretch as the field began to settle in and try and reel Miller in.

Miller, holding a huge lead, would hit lap traffic on lap 8, while Wagner would slide Wolfe for third on lap 13 using the bottom of turns one and two. Two laps later, with the lap car of Rick Lafferty causing Esh to break his momentum, Wagner rolled through the middle of turns 1 and 2 to move into the second position.

One lap later Wolfe was able to overtake Esh for the third position.

Over the next 7 laps, Wagner would work the entire speedway, using every inch of 'The Speed Palace' to make up ground on the leader. Meanwhile Miller was struggling with the laps cars of Justin Whittall and Walton. On lap 22, Wagner would make his move, driving through the middle of turn 1 in attempt of pulling a slide job, but Miller used momentum coming out of turn 2 to pull away once again.

"I knew Logan was there and you can’t afford to mess around with these guys behind you," said Miller. "Logan is one of the hottest drivers in the country right now, so I knew it was time to go if I was going to hold him off."

Wagner would regroup following the slide-job attempt and once again settle in over the final 3 laps. With a lap car in between him and Miller, Wagner once again sized him up. This time he tried the middle of the speedway through turns 3 and 4, pulling to the tail tank of Miller, however Miller pulled away off the top of the Speedway to take the checkered flag by .377 seconds.

"I kept seeing Logan show his nose and I was holding on with everything I had," said Miller. "I was either going to beat him or stuff it in the fence. Luckily we ended up here in first and I'm super excited for my whole team."

For Wagner, it was a great run from 9th. However, he didn't realize he wasn't leading the race and wished he'd driven a little harder over the final laps.

"We were really good and we got there  racing pretty hard with Lucas and I guess we let Miller check out on us," said Wagner, the current Weikert's Livestock 410 Sprint Car points leader. "I thought once we got by Lucas we were leading the race and that's on me 100% as a driver not knowing."

"But shout out to that kid. It’s his second win of the year and he was driving one heck of a race. He was up on the fence banging that right rear off the fence and you got to tip your hat and move on to the next one."

It would be hard to classify Dylan Yoder's season as a failure. He hasnlt finished off the podium once all season and holds a commanding points lead in the River Valley Builders Super Late Model Series standings. However, he hadn’t won a race at Port Roysl Speedway in 2019.

Yoder finally got the monkey off his back and parked his #24 in victory lane, besting Kyle Hardy and Andy Haus for the $2000 winner's share.

"It was a lot of fun out there," said Yoder. "I didn’t feel like I could really do anything wrong out there. We've been second and third so many times this year. It's nice to get a win a be here in victory lane."

Rance Garlock and Austin Berry led the field to the green flag with Garlock jumping out to the early lead by a nose over Berry at the line. However, Berry would get a run coming off the top of turn 4 to take the lead the following lap.

Meanwhile, 7th starting Hardy began making his move through the field. He used the top of the speedway in turn 2 on lap 3 to move into fourth. One lap later Hardy would use the bottom on the front stretch to pull past Mike Lupfer for third at the flagstand.

Haus and Yoder would move into fourth and fifth a lap later. The following circuit Hardy used the bottom of turns 1 and 2 to pull past Garlock into the second position and he began to set his sights on Berry.

One lap later, using the bottom of turns 3 and 4, Yoder pulled past Haus and Garlock to move into third at the flagstand.

Berry's attempt to take home the checkered flag came to an end when he slowed while leading with an issue for a broken rear end, handing the lead to Hardy. The yellow would fly on lap 9 as 2 cars tangled in turn three, bunching up the field for a complete restart,

On the restart, Yoder tried to use the bottom of the speedway, but Hardy was able to use his momentum to pull ahead once again exiting turn 2 to lead lap 11. The caution would fly once again when Ralph Morgan came to a stop in turn 14 on lap 12.

Hardy would once again get the jump on the restart. However, Yoder this time tried the top of the speedway. He'd make it stick exiting turn 2 to take the lead for good on lap 15.

"The track is so wide and you just never  really know which line to take out there, " said Hardy, of Yoer using the top to take the lead. "Dylan is really fast this year and he just was better than us in spots where we were not."

Yoder would hit lap traffic on lap 20, but would never be challenged over the remaining 10 circuits. At he checkered fklag, Yoder held a 2.254 second advantage over Hardy, Haus, Lupfer and Gene Knuab.

"We've been really fast and we just needed luck to find our way," said Yoder of his first triumph of the year. "We just were patient and hit our spots and here we are getting the win."

"Out car was really good and I was kind of moving around a lot to find where the car was best on the track," said Snook, "I knew once we got out front, we’d have a good chance to win it."

Mike Smith and Kevin Probst led the field to the green flag, with the Troy Miller making it three wide after a bobble on the front row at the flagstand to lead the first lap.

While Miller started to build his lead, Snook was busy moving through the field from his seventh starting position. By lap 4, Snook had entered the top 3, moving into the position using the bottom of the speedway in turn's 3 and 4.

Eighth place starter Andrew Yoder was on the move as well, following Snook into 4th by lap 5.

Miller was holding a nice advantage when Chase Bowsman came to a stop on the front stretch in front of the flag stand, bringing out the caution at the halfway point.

Following a return to green flag action, Miller and Snook put on a battle that had fans on the edge of their seats. Over the next 5 laps, Snook would use the bottom of the speedway to pull even with Miller, though Miller would lead each lap thanks to momentum he gained exiting turn 4 on the top of the speedway.

Finally,  Snook was able to make it stick, leading lap 16 at the line and he never looked back. Snook would go on to take the victory by a margin of 2.525 seconds over Miller, Yoder, Ryan Zook and Devin Hart.

"I been racing against Troy longer than I care to admit," laughed Snook in victory. "I guess we took one home for the old guys out there tonight. I'm happy to win one in a hard fought battle."

For Miller, he thought he had the best car but a mistake cost him the race.

"I think if we didn’t bobble a bit coming out of turn 4 we'd have been able to be sitting there where he is," said Miller. "We can’t be too upset with a second, but I think I let one get away tonight."