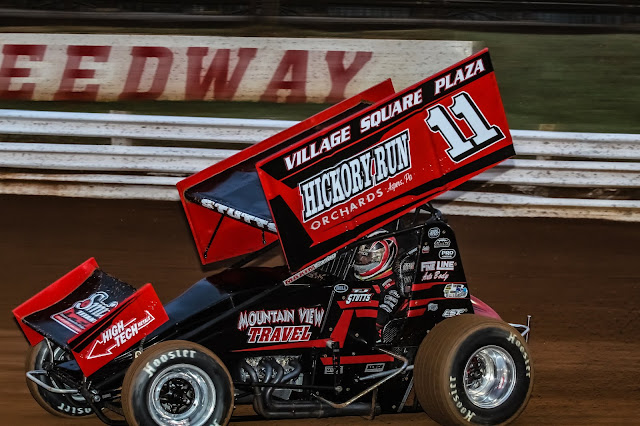 Sponsored by Sprintcarunlimited.com, gates for the kickoff of the nine-night series open at 5:30 pm.

Sprintcarunlimited.com will be giving away FREE pens to fans as they enter the frontstretch grandstand gates along with several shirts to lucky winners during the racing program.

Adult general admission is set at $18 with youth ages 13 – 20 admitted for $10.  Kids ages 12 and under are always admitted for FREE at Williams Grove Speedway.

The night will be highlighted by a special pre-race appearance by noted sprint car driver, author and television commentator Brad Doty of Apple Creek, Ohio.

From 6 – 8 pm, Doty will be on hand signing autographs for fans and offering merchandise adjacent to his famed Bower’s Coal No. 28D sprint car, currently owned by Mechanicsburg’s Stoney Miller.

Sprint car driver TJ Stutts of Liverpool will also be on hand with Doty to meet and greet fans and sign autographs.

The speedweek 410 sprints will compete in time trials, heats and a 25-lap main in the speedweek series opener with the feature paying $5,000 to win.

The HJ Towing & Recovery 358 sprint cars will round out the racing card.

Dietrich has opened up a commanding point lead over Freddie Rahmer in a quest for his first Williams Grove track title.

The Adams County pilot has already taken three wins this season aboard the Gary Kauffman-owned No. 48.

The Williams Grove speedweek opener will be another race in the 2019 Hoosier Diamond Series of events at the track.

Event sponsor Sprintcarunlimited.com is a prime destination for up to date sprint car results, race reports and feature stories from across the country as well as in the region.

Learn how to purchase a Sprintcarunlimited.com membership by visiting the website.

Keep up to date on all the latest speedway news and information by visiting the oval’s official website located at www.williamsgrove.com or by following the track on Twitter and Facebook.
Posted by Bill McIntyre at Sunday, June 23, 2019