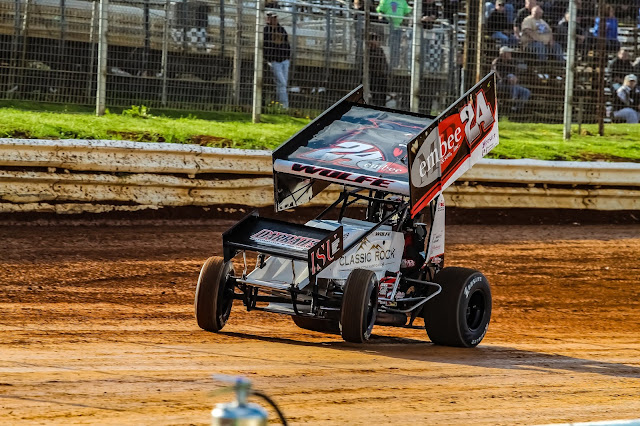 Port Royal, Pa- Bryan Clauson was a legend that transcended all of motorsports. A successful sprint car driver, a multiple time Indianapolis 500 starter and more, Clauson was a hero to fans and drivers alike.

For Tyler Courtney, that admiration was more of a big brother. As a young up and coming driver, Courtney walked into the Clauson racing shop looking for an opportunity and advice. What he got was a mentor, a friend and an inspiration.

Not just on the track, but off the track as well. Whether it was advice about different tracks, driving styles or day to day things, Clauson was always there guiding the young driver along the way.

"He taught me so much and I always have considered him more of a brother then anything," said Courtney. "Mostly he taught me to stay humble and I can honestly say I wouldn’t be the man I am today without his guidance and help."

That's what made losing him so hard when Clauson passed away following an accident in 2016.

"I miss Bryan all the time. It’s hard losing someone so close to you," said Courtney, who got his nickname Sunshine from Clauson as well. "I been trying to make him proud everyday since then."

Clauson would have been proud of the performance Courtney put on Saturday nightas he bested Chris Windom and CJ Leary in dominating fashion to pick up the USAC Eastern Storm feature event presented by www.sprintcarunlimited.com at Port Royal Speedway by 3.150 seconds.

"Today would've been Bryan's 30th birthday, so this one is for him." said Courtney from victory lane. "He did a lot for my career and did a lot for everybody on this team. Even with him not being here, he's helped us more than he knows. We lost a great guy."

Courtney started the feature event on the outside front row next to Windom and jumped out to the early lead using the outside of the speedway in turn's 1 and 2. Nobody else had a chance once Courtney got out front.

By lap 10, Courtney led the field by 1.6 seconds with Windom and Chase Stockon attempting to close the gap. However on lap 11, Courtney's lead was wiped out when Robert Ballou broke in turn 3 with rear end damage.

On the restart, it was Courtney quickly jumping out to a large lead again. 5 laps later Kevin Thomas Jr. passed Stockon for 3rd, with Leary, who set quick time earlier in the night, following suit for fourth.

As Thomas Jr. and Leary attempted to track down Windom for second, Courtney was full steam ahead, stretching his lead to nearly 3 seconds by lap 22.

Thomas's night would come to an end 3 laps later as he blew a right-rear tire while battling with Leary in turn 3 and ended up in the fence.

With four lap cars positioned between him and Windom, Courtney just had to hit his marks and make laps.  Following a return top green flag action, Courtney again jumped out to a huge lead of nearly 2 seconds within one lap.

Nobody would ever  get close, as Courtney cruised to victory and the $6,000 payday

"We've been banging our heads against the wall trying to figure out what we  were doing," said Courtney. "We just came to the conclusion that we weren't having fun so we got back to the basics and having fun."

"To get another Eastern Storm win is pretty cool, but to get our momentum going the right way on the Sprint Car side is even more important to us."

Windom, who was looking for his third straight Eastern Storm victory at 'The Speed Palace', had to tip his cap to Courtney and his team.

"Tyler was just better than us and that's really all there is to it," said Windom. "I tried to just save my tires and hopefully we’d be there at the end and something would fall our direction. We'll take a second and move on to the next race."

Stockon and Justin Grant finished out the top 5 with Carson Short, Bacon, Jason McDougal, Jarett Andretti and Joey Biasi finishing out the top 10.

Greg Plank and Justin Whittall led the 22 car field to the green flag with Plank jumping out to the early lead. Plank would lead lap 1 before Whittall used the bottom of the speedway in turns 1 and 2 to take the lead with 3rd starting Jared Esh moving into second in turns 3 and 4.

AJ Flick moved into fourth on the following lap with Anthon Macri in tow. One lap later Wolfe would crack the top 5.

Esh worked the tail of Whittal, however he wasn;t able to make the pass. Whittall began to stretch his lead slightly until the caution came out on lap 8 for Daryl Stimeling as he spun around in turn 1.

As the field went back to green, Whittall again jumped out to a lead with Flick sliding  Esh for second and Wolfe passing Macri for fourth on lap 8.

On the restart Whittall again sped off, this time with Flick in heavy pursuit. Wolfe used the high line in turns 1 and 2 to get by Macri for third. Over the next 2 laps, Flick and Whittall would swap the lead multiple times with Flick leading lap 12 before Whittall took it back one lap later.

As Whittall was focused on Flick, Wolfe was sizing up the leaders to make his move. With Whittall guarding from a slide job attempt, Wolfe hit the high side to gain momentum out of turn 2 and flew under Flick for second entering turn 3 on lap 15.

On the following circuit, Wolfe this time used the bottom in turns 1 and 2 to get under Whittall and continued into turn 3 and 4 to take the lead for good

Wolfe began to stretch his lead over the next 6 lap and he hit the tail end of the field with 3 to go. With Logan Wagner moving into 5th and coming fast and Whittall hungry for his first win, Wolfe was hoping for a caution free finish.

Coming around for the checkered flag, Esh blew a tire in turn 2 brungnout out the caution lights with 1 to go. However, after checking things out, Speedway officials deemed Wolfe took the checkered flag prior to the wreck, giving him a $4300 payday over Whittall, Blane Heimbach, Flick and Wagner.

"I obviously didn’t want a restart. It was  awful close coming to the finish," said Wolfe about the incident. "I saw them waving  the yellow, but then they came back and said the checker was out so it was good to be me."

"You just never know what the right place is to be on the track in terms of restarts, so I was happy it was over and we can be sitting in victory lane."

For Whittall, a rookie in the 410 Sprint Car ranks, he was happy to have the experience battling for the victory and gaining momentum for his young team.

"After the last couple of weeks it’s just really a good feeling to be competitive and be racing for wins," said Whittall. "Hopefully we can learn from this and keep it going and hopefully next time we'll be sitting up there where Lucas is tonight."