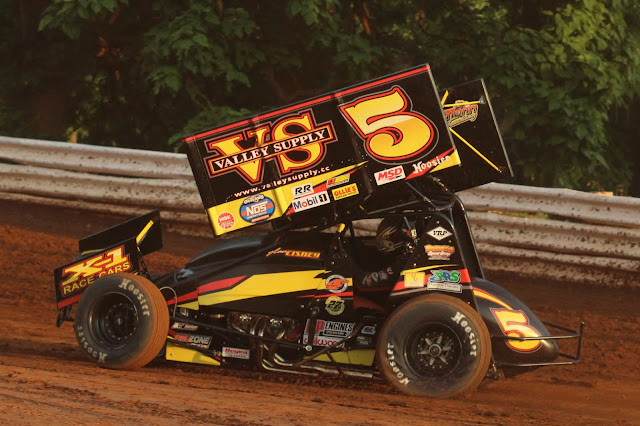 The victory in the 30-lap Opperman/Bogar Memorial was worth $5,000 at the wheel of the Valley Supply No. 5.

Danny Dietrich of Gettysburg was the Fast Tees Fast Qualifier over the 26-car field with a lap time of 18.057.

Ken Duke of Selinsgrove powered to his first career win on the half-mile track in the 20-lap 305 sprint car main event.

Both winners of the open wheel doubleheader Sunday night got their racing starts in go karts and micro sprint cars on the speedway’s smaller one-fifth mile track.

Selinsgrove Speedway will be back in action at 7:30 p.m. this Thursday, July 4, with a special mid-week show featuring Firecracker 30-lap features for both the 360 sprint cars and super late models paying $3,000 to win. The pro stocks and roadrunners will also be on the holiday racing card. Track gates will open at 5 p.m.

There will be no racing at the track on Saturday, July 6.

Track officials made a huge announcement Sunday night that the Jim Nace Memorial 37th Annual National Open for the 410 sprint cars on Saturday, Sept. 14, will pay $20,000 to win.

A multi-car melee unfolded as the field charged off the fourth turn to take the green flag at the start of the 410 sprint car feature, collecting Danny Dietrich, Ryan Smith, Freddie Rahmer, Mike Walter and Kyle Moody with all but Dietrich able to rejoin the race.

Polesitter Blane Heimbach shot to the front when the race got restarted.  He was followed by Dylan Cisney, Kyle Reinhardt, Lucas Wolfe and Tony Stewart.

Stewart shot into second on lap 17 coming off the fourth turn but Cisney battled back for the position.

The red flag came out when Ryan Smith, who had returned to the field after the first lap crash, lost his top wing and crashed hard into the first turn fence.  A palpable silence hung over the speedway until it was announced the popular Smith was all right and a loud cheer from the fans broke the silence.

A lengthy break was needed to clean up the fuel that was spilled. During the stop, Heimbach changed his wing and was sent to the back of the pack, handing the lead to Cisney.

Wolfe used the outside lane on the restart to get by Stewart for the runner up position while Brock Zearfoss took over third.  He and Stewart performed a high-speed dance around the speedway as Cisney drove away.

“That race belonged to Heimbach and it’s too bad what happened but I’d rather be lucky than good.” Cisney said. “Back in 2002 my dad and I stood here after my first kart win so this is unbelievable.  I got some new sponsors this year and it has allowed us to travel a little bit but I’m still not good on little tracks so it feels good to get back here.”

Ken Duke blasted to the lead in the 305 sprint car feature and was followed by Cale Reigle, Larry McVay, Jake Waters, and Kruz Kepner.   Kepner spun on the first lap, bringing out the yellow flag.  Ryan Lynn started his charge up through the field and on the sixth lap had second spot in his pocket.  Taking the long way around, Lynn started to close on Duke.

Landon Wood spun and slowly rolled on his side to bring out the red on lap 10.

In the waning laps as Duke drove away Dave Grube and Cale Reigle battled for third with Devin Adams soon joining the fray.