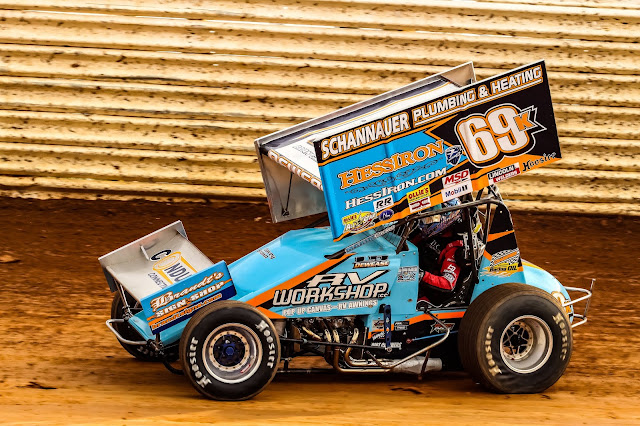 PORT ROYAL, Pa- Up until Wednesday night, nobody had been able to double up in the win column of the 2019 PA Speedweek Series. Four nights in, there had been four different winners.

Lance Dewease made sure that changed at Port Royal Speedway when he charged from the 8th starting position to pass Logan Wagner with 2 laps to go to pick up the $7000 Weikert's Livestock 410 Sprint Car victory in front of a packed house of fans for his second win of the week.

"I was able to get rolling there late and carry some speed through the corners," said Dewease. "I was fortunate to get to Logan before we got to the checkered and it was a good night for us."

Danny Dietrich and A.J. Flick led the field to the green flag with Flick jumping out to the early lead using the outside of turn's one and two to pull past Dietrich down the backstretch. Making his first PA Speedweek appearance of the year, Flick set sail with a blistering pace, stretching his lead to over 1 second by lap 4.

Over the next four laps, Dietrich slowly was reeling in the leader, making his move on lap 9 in turn's one and two with a slide-job attempt. Flick crossed back under Dietrich exiting turn 2 to foil the attempt. Dietrich tried again in turn 4 with the same results. It looked like Dietrich had enough momentum the following circuit to pull off the pass, however Aaron Reutzel spun and kept going, bringing out the caution to put Flick back in the lead for the restart.

On the restart, Dietrich once again tried to slide Flick in turn's one and two, with Flick once again pulling ahead of the Gettysburg, Pa native exiting turn 2. However, with the field close behind, Wagner used the opportunity to pull ender Dietrich down the backstretch and to take over the second position.

One lap later Dewease cracked the top five for the first time and began to make his move forward as he passed Brock Zearfoss for fifth at the start/finish line.

Over the next two laps, Wagner was sizing up Flick when he made his move using the bottom of turn three and four to take the lead and lead lap 13.Wagner checked out and built up a nearly 2 second lead over the next 2 laps. At the same time, Dewease got past the 91 car of Kyle Reinhardt for the 4th position using the top of the speedway exiting turn 4.

As Wagner was pulling away, Dewease was stalking the tail tank of Dietrich. It looked like he was going to pass him for the third position, but before he could complete the pass the caution flew again for Reutzel, who this time had a tire go flat. While under caution, Flick's shot at victory went out the window as well as he had a right rear tire go flat, handing second to Dietrich for the restart on lap 20. Flick would rejoin the field after changing the tire.

"We were really good all night and it was just a matter of getting to the front and being patient," said Wagner. "I didn’t really know what was going on behind me, but I was feeling good there before that caution."

It wouldn't be the last caution though. Following the lap 20 restart Wagner once again jumped out to the lead with Dietrich and Dewease in tow. But the field would slow again following a caution for a slowing Jeff Miller, who caught the outside guardrail in turn 3 on lap 22 and stopped on the front stretch.

On what would be the last restart, Wagner again jumped out to a large lead. He was using the top of the speedway, while Dietrich tried different lines in both corners to make up the difference and hold off Dewease, who was rolling through the middle of the corners. Finally able to pass Dietrich, Dewease moved into the second position on lap 26 at the line and set his sights on closing the 1.169 second lead Wagner held.

With 2 laps to go, Wagner held a .547 lead over Dewease, who also was searching the speedway for the fastest line to catch Wagner. Using the bottom of the Speedway in turn's 1 and 2 and the middle in turn's 3 and 4 he'd been chipping away at it. Finally Dewease was able to pull alongside of Wagner down the backstretch and pull ahead of him exiting turn 4 to lead the white flag lap.

Wagner would try to once again to build up some momentum around the top of the speedway and he was able to make it close exiting turn 4 coming to the checkers. But ultimately Dewease would take the win by .194 seconds over Wagner, Dietrich, Freddie Rahmer and Reinhardt.

"That's how this place is. If you’re right you can move around," said Dewease of finding the perfect line to catch Wagner. "I was carrying speed off the corner and I could really get runs at him. I was just fortunate enough to get to him before we got the checkers."

Wagner was happy with a second, but ultimately he wished Dewease had gotten to him earlier to be able to make a move back by.

"It was checkers or wreckers and I was really giving it everything I had out there," said Wagner, who is the current track point leader. "Sometimes it's better to be sitting in second at that point so you can kind of see where he's running and such. If he'd gotten to me earlier, I might have had something for him there at the end . But ultimately we can’t be too upset with a second."

The win also moved Dewease into the PA Speedweek Points Lead despite missing an event as he holds a 12 point advantage over Wolfe. Rahmer (-27), Dietrich (-68)  and Macri (-98) make up the top 5 heading into Hagerstown.

Kyle Reinhardt would back up a top five feature finish in the Weikert's Livestock 410 Sprint Car feature with a win in the United Racing Club 360 Sprint Car portion of the event at Port Royal Speedway.

The win was worth $2,000 and was the young driver's first at the 'Speed Palace'.

Reinhardt lined up on the outside front row alongside of Steven Drevicki and jumped out to the early lead before the red flag came out after a 5-car pile up in turn 3 which ended with Michael Walter on his side. All drivers were ok.

At the restart, Reinhardt once again pulled out to the lead to lead lap 1. One lap later Lucas Wolfe, who started fourth, used the top of the speedway exiting turn 2 to pass Drevicki for the second position.

As Reinhardt was checking out, the race or third was getting wild. Third place driver Derek Locke dodged a spinning lapped car with 12 to go, which allowed Jason Shultz, Mark Smith and Steve Buckwalgter to close the gap. Smith would roll through the middle of turn 3 and 4 before taking over the third position just past the start finish line.

With two laps to go, Smith would use a lapped car in front of Wolfe as a pick to slide ahead into the second position, with Buckwalter in tow. However, nobody had anything for Reinhardt as he won the feature by a convincing 3.077 second advantage over Smith, Buckwalter, Schutz and Wolfe.