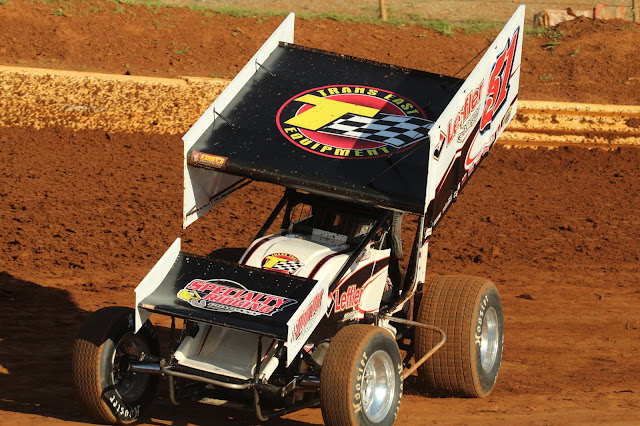 HAGERSTOWN, MD – Freddie Rahmer picked up the win in exciting fashion during the third edition of the Johnny Grum Memorial on Thursday night’s seventh round of Pennsylvania Sprint Speedweek at Hagerstown Speedway.

Robbie Kendall and Lucas Wolfe paced the field from the front row, and Kendall beat Wolfe into turn one and off of turn two to take the lead.

Kendall quickly drove his No. 55k into lapped traffic on the sixth circuit before a Lap 7 caution waved for the stopped car of Brandon Rahmer in turn one.

On the restart, Kendall repeated his original start, beating Wolfe and the field again to remain the race leader. At the halfway point, Kendall led Wolfe by a 1.63 second margin and once again was working through lapped traffic while rim-riding the top groove of the Hub City oval.

Just a few laps later, Wolfe worked the bottom groove underneath Kendall to take the lead coming off of turn two on Lap 19. As Wolfe was leading, a four-car battle for second began between the cars of Kendall, Cory Eliason, Danny Dietrich, and Freddie Rahmer.

Rahmer made the best of the battle, settling into second and began his chase of Wolfe on Lap 23, and worked the low groove to pass Wolfe for the lead on Lap 24.

From then, Rahmer looked poised to pull away until a Lap 28 caution waved for the spun car of Brock Zearfoss on the backstretch.

This setup a two-lap dash to the finish, but Rahmer was too strong at the end, and took the checkered flag.

The win for the Salfordville, Pennsylvania driver in his Leffler Energy No.51 was the first of his career at Hagerstown.

“I don’t know how good I was at the end, but it was good enough to hold them off. It’s pretty cool to get my first win at Hagerstown.  I always love coming here. I wish we could race here more. The track flows perfect for Sprint Cars and Late Models. It’s all good racing.”, praised Rahmer in victory lane.

The win put Rahmer into the points lead at the time for the PA Sprint Speedweek championship with two races remaining.

Notes: 22 cars signed into the pit area on the July 4th holiday race. Notably absent was Lance Dewease, whose team elected to take the night off. Dewease’s streak of three consecutive wins at Hagerstown came to an end.

Heats were won by Wolfe, Dietrich, and Kendall.