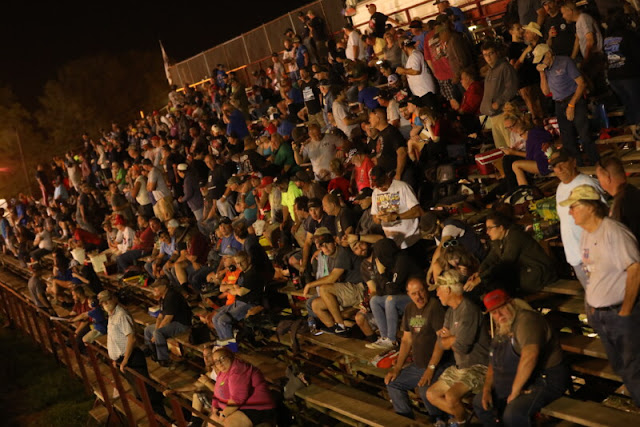 BECHTELSVILLE, PA . . . . . . . The NAPA Auto Parts Thunder on the Hill Racing Series will return to the Grandview Speedway in 2020 for its thirty-first season. Another year of premier events will make-up the 2020 Thunder Series to include all the fan-favorite shows, plus the first-ever Trick or Treat Triple 20’s for Modifieds joined by the Sportsman to highlight the October MODS at the MADHOUSE season finale.

The Thunder on the Hill Racing Series has presented 137 events since its inception in August 1990 and is known for bringing the top racing divisions and top touring series to Grandview Speedway. In 2020, that tradition continues with the USAC Non-Wing Sprints and Midgets, the Pennsylvania 410 Sprint Speed Week Series, Tony Stewart’s All Star Circuit of Champions, and the Grandview NASCAR 358 Modifieds all scheduled for events.

In the past, the Thunder Series also presented the WoO Sprints and Late Models, SCRA, CRA, DirtCar, ROC Modifieds, ARDC Midgets, URC Sprints, and MASS Sprint cars. In most cases, these events have two top divisions sharing the main event, making it a must-see show.

The 2020 NAPA Auto Parts Thunder on the Hill Racing Series will open on Sunday, May 24, with the 23rd Annual Modified Traffic Jam joined by the Sportsman. The series continues on Tuesday, June 9, when the USAC AMSOIL National Non-Wing Sprint Car Series invades Grandview for the annual Jesse Hockett Classic, co-headlined by the NASCAR 358 Modifieds. A fan-favorite event, the USAC non-wing stars put on a race like no other at the Grandview Speedway.

Always one of the most anticipated events at Grandview is the Pennsylvania 410 Sprint Car Speedweek alongside the NASCAR 358 Modifieds on Tuesday, June 30. The Speedweek 35 lap feature, known as the Hodnett Cup, is dedicated to the memory of sprint car great Greg Hodnett. Fabricated from one of Greg’s many trophies, the Hodnett Cup includes a base where names of future Hodnett Cup winners will be engraved. As a perpetual trophy, it will be available on race day for the Victory Lane celebration. The race winner’s name and event date are added, and the trophy will be on display year-round at the Eastern Museum of Motor Racing at the Latimore Valley Fairgrounds.

The USAC Non-Wing Midgets will return to Grandview and the Thunder Series for the 2nd Annual Ken Brenn Midget Masters on Tuesday, August 4. In 2019, the USAC Midgets put on thriller on a track that many fans say was designed for the Midgets. The NASCAR 358 Modifieds are also scheduled for this program.

Levan Machine and Truck Equipment will again present Tony Stewart’s All Star Circuit of Champions on Thursday, August 27, for the national touring series’ fifth consecutive appearance at Grandview. The All Star 410 Sprints will chase a $5,000 first-place prize to win the 35 lap feature event. The NASCAR 358 Modifieds will be on the program as well.

The 2020 season finale will close out with the Mods at the Madhouse Trick or Treat Triple 20s for Modifieds. That’s right; heat races will open the program leading to three twenty-lap Modified features in one night. The Sportsman will be part of this event on Saturday, October 17.

MODS AT THE MADHOUSE Trick or Treat Triple 20’s & Sportsman

Located less than a mile off Route 100, 10 miles north of Pottstown, PA

About Thunder on the Hill Racing Series

The brainchild of Grandview Speedway owner Bruce Rogers, special events promoter Bob Miller and local driving star Dave Kelly, the Thunder on the Hill Racing Series celebrates 31 years of the most anticipated events of the racing calendar year after year. In 137 events, over $4.8 million dollars has been divvied up among the area’s fastest racers. What started as a single 410 Sprint Car event in 1990 has blossomed to feature a variety of racing action including 358 Modifieds, USAC Wingless Sprints, All-Star Circuit of Champions, USAC Midgets, 360 & 410 Sprint Cars, Sportsman, Late Models, Midgets, Legend Cars, DIRTcar and ROC Modified events.

Grandview Speedway is a high-banked one-third mile clay oval, celebrating their 58th Anniversary season in 2020. The facility offers free parking, quality food at reasonable prices (be sure to try the french fries), a program book, Grandview Speedway and Thunder on the Hill race wear and great viewing from every seat in the house. Race fans may take part in the Inside/Out promotion, where you can sign up (no charge) to watch warm-ups from inside turn four. Race fans are also invited to victory lane following the racing program and, race fans may enter the pits after the races to meet the drivers. Be ready to enjoy the spine-tingling fireworks salute on the feature event parade lap.
Posted by Bill McIntyre at Friday, January 03, 2020