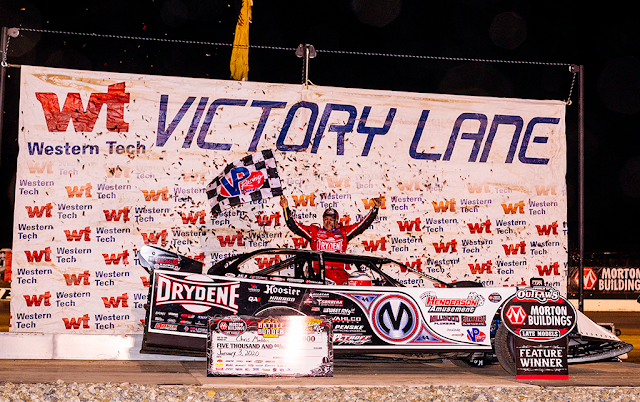 VADO, NM – Jan. 3, 2020 – Throughout the final six months of the 2019 racing season, Chris Madden showed the entire Dirt Late Model world why he is the hottest driver in the country with his basket of wins in several big-money races and other national and regional tour events. Now only three days into the new decade, Madden is right back at it again, picking up a win in the first World of Outlaws Morton Buildings Late Model Series Feature event of the year on Friday night at Vado Speedway Park’s inaugural Battle at the Border.

Two-time and defending Series champion Brandon Sheppard, of New Berlin, IL, was gaining on Madden in the final laps but was ultimately unable to catch the leader, settling for second while Madden’s fellow Team Drydene member Ricky Weiss, of Headingley, MB, completed the podium after an extended battle in lapped traffic.

Setting PFC Brakes Fast Time and a new track record in Qualifying, Madden was simply dominant throughout the night. The Gray Court, SC-native led flag-to-flag in Drydene Heat race #1, redrew the outside pole for the Morton Buildings Feature and made a great move for the lead on Weiss down the backstretch on lap two to kick things off in the 30-lap main event.

A three-car battle between the podium finishers ensued shortly thereafter, Madden showing the way into lapped traffic as Weiss snuck a nose under on lap 10 and got his second lap led in before Madden took it right back one circuit later.

“I thought maybe I could’ve given Madden a little run for his money there,” Weiss said. “I got beside him, just the lap cars didn’t play in my favor.”

The next 15 laps tightened up the leaders as they dove head-first into a long chain of lapped traffic that threw everyone, including Madden, a curveball.

“I was able to get my right-rear fired up and get my momentum going to pull back by Ricky on the start,” Madden said. “Then, we were out there holding our own and I guess those lapped cars might’ve knocked the yuke tires into the infield, and a whole bunch of dirt and crumbs started coming across the racetrack, so it got pretty sketchy then.”

Sheppard benefitted the most from the changing terrain, getting underneath Weiss off of Turn 4 on lap 18 to take second at the line. From that point forward, Sheppard held his ground in the runner-up spot and remained in hot pursuit of Madden, but still felt as though he had the car to win when the checkered flag dropped.

“Once we got lined-out there, Ricky slipped up and I was able to get to second,” Sheppard said. “I think I had a better car than them guys did. I stayed right on Madden’s bumper the whole time.”

Coming off of a record 18-win season, Sheppard was used to seeing more of the back of lapped cars than of the leader last year, but still showed that same intensity Friday night as he gave chase to Madden. That constant pressure gave Smokey all he could handle driving through lapped traffic in the leaders’ preferred lane at the bottom, but he was able to persevere and bring home his 28th career World of Outlaws victory.

“I knew they would be there. Anytime we catch lapped traffic and it’s one lane like that with a bunch of dirt everywhere, they’re going to catch you. I just didn’t need to make mistakes and didn’t need to choose the wrong line at the wrong time, and it worked out well for us,” Madden said.

The Rocket Chassis house car yet again showed its strength on the track Friday night, but just as most of the Dirt Late Model world was anticipating, Sheppard and the Rocket1 Racing team may have met their match this year with the return of the Scott Bloomquist Racing machines to the full-time World of Outlaws roster. Sheppard knew he had a fast and versatile car, but Madden’s was just a tick better through the same parts of the track.

“We had a really good racecar, I could drive wherever I wanted to go,” Sheppard said. “The momentum line, kind of diamond-ing the corners off and keeping your speed up was about the best line, and that was what Chris and I were both doing there, so it was going to be hard to pass him.”

As for Weiss’ venture through traffic, he was forced to make extra passes to regain position after slipping back a bit in the final third of the race. His Team Drydene teammate Scott Bloomquist and Mike Marlar engaged in a battle for position that eventually reached the bumper of Weiss and pulled him in as they waded through slower cars. But the 2019 Rookie of the Year kept his cool and was able to drive back by in the closing laps with a car he said felt very good on the brand-new track.

“I knew our car was real good, it was definitely good enough to run up front with Madden. It was maneuverable, I just needed a few breaks with the lapped cars,” Weiss said.

The inaugural Battle at the Border continues on night #2 of racing action from Vado Speedway Park with Hot Laps beginning at 3 p.m. MT. Catch all the action live on DIRTVision!