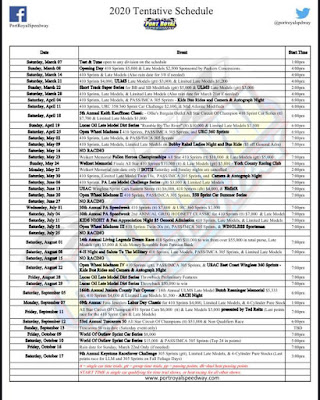 PORT ROYAL, Pa- The 2020 schedule at Port Royal Speedway has been released.  A total of 34 race dates are on the schedule with 12 different divisions taking part.  The Weikert Livestock 410 sprint cars will be featured a total of 29 times beginning with the opener on Sunday, March 8th and concluding with the 2-day NOS Energy Drink World Of Outlaw Sprint Car Series on October 9th and 10th.  The final three races of the season; the Tuscarora 50 and the World Of Outlaw events will be non-point races.

The marquee event, the Tuscarora 50, will take place on Saturday, September 12th and will again be sanctioned by the Ollie’s Bargain Outlet All Star Circuit of Champions.  The All Star series will sanction the Keith Kauffman Classic on April 18th and pay $7,700 to win, the 2-day Weikert Memorial over the Memorial Day Holiday each paying $10,000 to win, and the Night Before the 50 on September 11th. The un-sanctioned $10,000 to win Living Legends Dream Race will take place on Saturday, August 1st.  Port Royal Speedway will again host 2 events as part of Pennsylvania Speedweek on Wednesday, July 1st, and conclude the week on Saturday, July 4th with the running of the Greg Hodnett Classic.  Both events will pay $7,000 to win.

The Super Late Models have 20 events scheduled for 2020.  The biggest late model purse in the history of the speedway will be paid on Saturday, August 29th when the Lucas Oil Dirt Late Model Series invades with a $50,000 to win main event.  The Lucas Oil Dirt Late Model Series will also present the “Rumble By The River” on Sunday, April 19th and the traveling group will have a preliminary event on Friday, August 28th.

The Super Late Models will again be part of the Weikert Memorial on both Saturday and Sunday over the Memorial Day Holiday paying $5,000 to win each event.  The Pennsylvania Late Model Challenge Series, formerly the Tri-Track Challenge, will visit the speedway for a time trial event on Saturday, June 6th.  Other high-paying late model races will take place on March 21st, March 22nd, and September 5th when the ULMS Late Model Series sanctions the events.

The PA Sprint Series (PASS) 305 sprint cars have 10 events scheduled in 2020.  The 305 sprints will make their first appearance at the speedway on Saturday, April 4th and will close the season with the 9th Annual Keystone RaceSaver Challenge event on Saturday, October 17th.  For the first time, the PASS/IMCA 305 sprints will be part of the World Of Outlaw Series event on Saturday, October 10th in an invitation only event with the top 24 drivers in the point standings participating.

The United Racing Club 360 winged sprint cars have 3 events scheduled in 2020; they are Saturday, April 11th,  Saturday, April 25th as part of Open Wheel Madness I, and on Wednesday, July 1st as a second division to the 410 sprint car PA Speedweek event.  358 sprint car teams are welcome to run all three events.

Also on the schedule for 2020 are the 4-cylinder stock cars (twice), the Short Track Super Series Modifieds on Sunday, March 22nd, and the return of the Mid Atlantic Modifieds on Saturday, April 11th

And finally, the USAC Wingless Sprint Cars return for the week-long Eastern Storm series with a 410 sprint car doubleheader on Saturday, June 13th.

Please stay tuned to our social media outlets and website in the coming months for any additional information regarding changes, promotions and pricing!
Posted by Bill McIntyre at Saturday, January 18, 2020