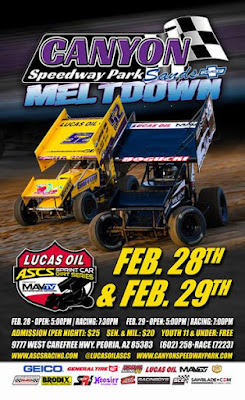 Bryan Hulbert – PEORIA, Ariz. (February 24, 2020) With time starting to run short for teams to finish and hit the road, the first event of the 2020 season for the Lucas Oil American Sprint Car Series presented by the MAVTV Motorsports Network will be the Canyon Speedway Park Meltdown presented by Sands Chevrolet on Friday, February 28 and Saturday, February 29.

Not the earliest the season has ever opened, that record belonging to Jax Raceway (Jacksonville, Fla.) which began the 1997 season on January 31; the 2020 opening doubleheader will mark the first time that the Lucas Oil American Sprint Car Series presented by the MAVTV Motorsports Network has seen action on a leap day, and is only the second time there has been a race on February 28.

The second time the Lucas Oil American Sprint Car Series presented by the MAVTV Motorsports Network has opened their season at Canyon Speedway Park, the last time was in 2012. That year also saw the season end at the one-third mile oval with a total of five races split among four winners. Tony Bruce, Jr., Brady Bacon, and Wayne Johnson each scored single wins while the late Jason Johnson picked up two.

The February double-header will also be the opening weekend for the ASCS Southwest Region, which has not gone head to head with the Lucas Oil American Sprint Car Series presented by the MAVTV Motorsports Network since 2017 with the series last visited Cocopah Speedway on Somerton, Ariz.

Leading up to the 2020 season opener, teams will have a chance to make some laps on Thursday, February 27 with Practice getting underway at 6:30 P.M. Friday, February 28 will begin at 7:30 P.M. with Saturday, February 29 going green at 7:00 P.M. Both nights open at 5:00 P.M. (MT). Admission each night is $25 for adults. Seniors and Military are admitted for $20 with kids 11 and under get into the grandstands free of charge.

Pit Passes are $40 per night. Kids ages 7 to 11 are $20 with kids 6 and under free. Additional classes in competition both nights include Askrens Trucking/Flexi Flyer Sport Mods, Allscapes Stock Cars, MickelsonRay.com Hobby Stocks, and Micros.

Canyon Speedway Park is located at 9777 W Carefree Hwy. in Peoria, Ariz. Information and directions on the Arizona oval can be found online at https://www.canyonspeedwaypark.com/ or by calling (602) 258-7223.

Live coverage is available for those who cannot make the trip on http://www.racinboys.com.