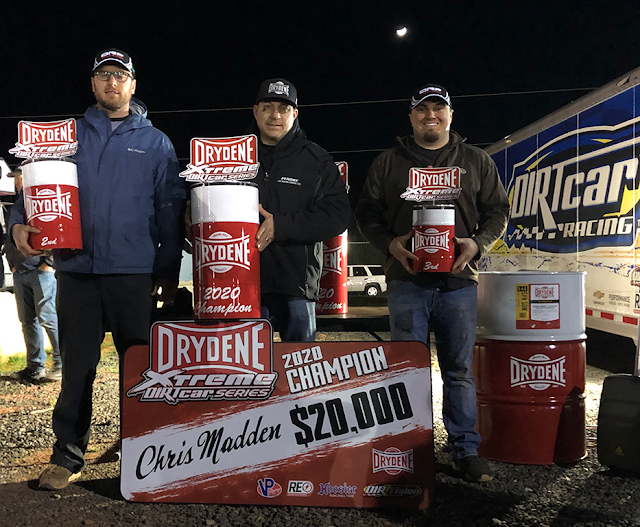 Williams drove a great race, fending off heavy pressure from the hungry challengers behind him that included the likes of tour winner Zack Mitchell, Casey Roberts, regional favorite Brandon Overton and Joshua Bishop. Madden, of Gray Court, SC, kept it straight and stayed out of trouble to clinch the inaugural Xtreme Series championship, worth $20,000, on the back of a 12th-place finish.

“It is definitely a good accomplishment, kicking off the season with a championship on a new series is pretty awesome,” Madden said. “We’d just like to thank the guys for putting up a series for us to run through the winter around home to make some decent money and keep us going.”

With two wins in Series action over the five completed races, Smokey was the only repeat winner. Clinching the title by 9 points over Ross Bailes, Madden also took a moment to thank his crew at Scott Bloomquist Racing and sponsors at Drydene Performance Products for their contributions to his success.

“Without those guys, it’s impossible for me. It’s not just about me, it’s a team effort here. As long as everybody pulls their weight and plays their part, we’ve got a pretty dominant team here,” Madden said.

An overjoyed Williams commented on his big accomplishment after the race by saying, “It’s kind of a dream. This is my first year in a Super Late Model, never raced it before. It’s different, but I can’t stress it enough… I feel I have the best crew, the best car owners. They give me the best. Hard work pays off.”

At the drop of the green, polesitter John Henderson grabbed the lead but cut a right-rear tire down after lap one, ending his night early. This put the lead into the hands of Williams, who jumped on the throttle on the restart and put his rookie talent on full display in front of a packed grandstands.

Williams opened up a decent gap between he and Mitchell before catching lapped traffic, when he appeared to back the intensity down a bit. Williams said he was trying to pick the smartest moment to get around the first slower car.

Several caution flags throughout the race forced Williams to make clean restart after clean restart. That’s not always easy for a Super Late Model rookie with all of the tough competition he had behind him, but the young Georgian didn’t flinch once.

“I just had to stay calm. I’ve never raced with this kind of competition before, and it was really tough. So I knew any mistake I made, they were gonna be knocking on the door,” Williams said.

But as hard as they knocked, Williams’ competition was unable to knock him down Saturday night. He drove the #2 back around to the checkers after leading 39 of 40 laps for a $7,000 payday.

Since joining the Rum Runner Racing team in November of last year, Williams and his new crew have come a long way on their road to success. And now that the first win is out of the way, Williams is really feeling the confidence kick in and knows the sky is the limit for the future.

“[It’s going] nowhere but up. There’s no excuses anymore. It gives you that confidence [knowing] you can go to a race and you can win. There’s that first win edge, you know? Now that we got this win and we’ve got a package together and everything’s gelling, there’s nowhere to go but up,” Williams said.

Mitchell held on for second to score his third top-five of the Series and secure third place in the overall points standings, worth $5,000. He gave it all he had trying to run down the leader, but never could quite reach Williams’ rear bumper to make the move, despite gaining on him substantially once they reached lapped traffic.

“I think a lot of it was dirty air, but I didn’t really think that until we got into lapped traffic. I was watching [Williams] when he caught the tail of the field, it’s like he caught them but could never get close to them,” Mitchell said.

Ultimately, it was a great night and a great Series effort by the team from Enoree, SC. Mitchell scored a tour win in December and finished ahead of a lot of heavy hitters on Saturday night, which sits well with him in the rearview mirror.

“I’m proud of all that. We’re a little smaller team, don’t have quite the resources these other guys have. I’m not making excuses, but to run with those guys I’ve watched race my entire life, it means the world,” Mitchell said.

Bailes clinched the runner-up spot in points by a single marker on the back of his eighth-place Feature finish, earning him the $10,000 points fund check. Williams, Madden, Mitchell, Trent Ivey, Kyle Strickler and Tim Vance were all recipients of $1,000 bonuses for perfect attendance throughout the Series.

And now what started nearly 14 weeks ago in South Carolina has come to a conclusion. The entire DIRTcar Racing family would like to thank each of the drivers, teams, sponsors and race fans that came out in support of the tour this winter season. A special thank-you goes out to the fine folks at Drydene Performance Products for being the title sponsor in the inaugural season of the Drydene Xtreme DIRTcar Series and for their continued support of dirt track racing.