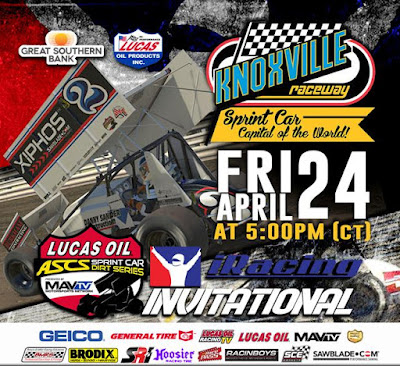 Bryan Hulbert – KNOXVILLE, Iowa (April 22, 2020) With the first round of action in the books for the Lucas Oil ASCS eSport Series presented by the MAVTV Motorsports Network, the next round of iRacing competition will take place on Friday, April 24 at Knoxville Raceway with action kicking off at 5:00 P.M. (CT).

Looking at a potential field of 60 drivers, several Knoxville Raceway regulars are slated to be in action with names like Brian Brown, Jamie Ball, Matthew Johnson, Ryan Leavitt, and Carson McCarl in the mix. The race will be shown live on Racinboys.com as well as the RacinBoys Facebook Page free of charge.

Looking back at last week's race at Williams Grove Speedway, Arizona’s Colton Hardy grabbed the win by holding off the late-race charge of Tony Gualda following a caution with five to go. A two-time champion of the ASCS Southwest Region, Hardy’s record in the iRacing Universe is extensive with 241 wins since 2014 across Oval, Dirt Oval, Road, and Dirt Road categories with 27 of those wins coming since January 1, 2020.

The virtual showdown at Knoxville Raceway is presented by Lucas Oil Products and Great Southern Bank.

The Lucas Oil American Sprint Car Series presented by the MAVTV Motorsports Network is scheduled to be at the “Sprint Car Capital of the World” for the 30th annual My Place Hotels ASCS 360 Knoxville Nationals presented by Great Southern Bank. The event takes place August 6, 7, and 8. Tickets are on sale at https://www.knoxvilleraceway.com.

The Format for the event will see some small changes based on things learned from last week’s event.

Teams will get 25 minutes of Practice prior to Qualifying.

Each driver will have two minutes to get on track and establish complete their two qualifying laps.

Teams will drop into Six SCE Gaskets Heat Races, going 8-Laps. Top 3 from each will advance to the Sawblade.com A-Feature.

Cautions will no longer be determined by the game, but by ASCS Officials in order to speed up the program. The full roster of drivers will be posted Thursday, April 23, 2020, on Facebook and Twitter.

Event updates and series information will be posted to http://www.ascsracing.com as well as our Social Media Outlets on Facebook and Twitter (@LucasOilASCS). We will also issue emails to our E-News Letter, which anyone can sign up for at https://bit.ly/3cTRbCq.

Who: Lucas Oil ASCS presented by the MAVTV Motorsports Network
What: ASCS iRacing Invitational
Where: Knoxville Raceway
When: Friday, April 24, 2020, at 5:00 P.M. (CT)
How to Watch: FREE on Racinboys.com