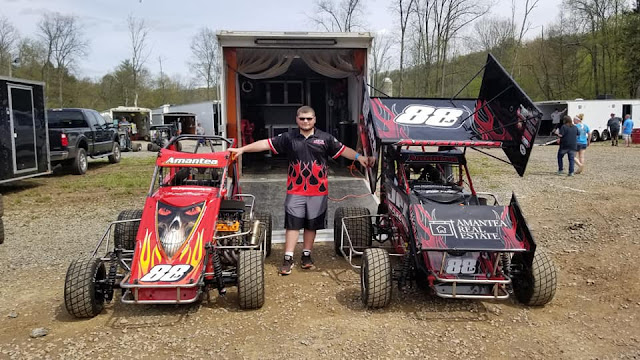 Inside Line Promotions - ORANGEVILLE, Pa. (May 18, 2020) - Joey Amantea competed in both wingless and winged 600cc micro sprint car competition at Greenwood Valley Action Tracks on Saturday, marking his first race since February.
With finishes of eighth in wingless competition and seventh in the winged feature, Amantea picked up his first two top-10 finishes of the 2020 race season.
"The weekend went really well and I think we had a car capable of even better than the finishes we had," he said. "In terms of gaining confidence and learning, we had as good of a weekend as we have had in quite a while."
Starting off the night in wingless action, Amantea charged forward one position from third to finish second in a heat race. The result placed him in the feature redraw, in which he ended up selecting the No. 17 - starting him seventh.
Amantea dropped two spots on the initial start, but drove forward to sixth. While battling for the fifth position, he went for a slide job and hopped the cushion, dropping him back to seventh before a caution came out. On the restart Amantea struggled to get back going and lost one position before settling for an eighth-place finish.
"My car was so good early in the feature and I felt we were among the best on the track," he said. "After that last caution the tires glazed over and we went from passing cars to holding on for what we could get. We were better than eighth, but I'll take it."
In winged micro sprint competition, Amantea started eighth in a heat race and passed four cars to finish fourth. As a result he earned the 12 th starting position in the main event.
Utilizing a setup that required him to run the extreme high line of the track, Amantea quickly charged through the field and was battling just inside the top five when a caution came out and negated several passes. He restarted seventh and engaged in a back-and-forth battle for the spot throughout the remaining laps before he took the checkered in seventh.
"We decided to try something new and we were running as high on the track as possible and moving forward doing it," he said. "It's really hard to run up there and we had several people come up to us and say how fun it was to watch. We might not have won, but I think we were the people's choice in terms of enjoyment."
Amantea will return to Greenwood Valley Action Tracks this Saturday for another dose of double duty action. He believes with the confidence he is gaining as a driver and with the knowledge his team is learning on the car that he is capable of winning if he can get better track position in the feature.
"Ultimately I felt like we had a car capable of winning in both divisions, but we just didn't have the track position to capitalize on the speed we had early," he said. "If we can draw some better numbers and start further up, I honestly feel like we have a chance to win next weekend.
"We ran really well against some really talented drivers in Trenton in February and many of those same drivers are the ones we are racing at Greenwood. To be battling with those cars up front, it shows we are not a flash in the pan and gives me the confidence to know we have a chance to win a lot this season."
QUICK RESULTS -
May 16 - Greenwood Valley Action Tracks in Orangeville, Pa. (Wingless) - Heat race: 2 (3); Feature: 8 (7).
May 16 - Greenwood Valley Action Tracks in Orangeville, Pa. (Winged) - Heat race: 4 (8); Feature: 7 (12).
SEASON STATS -
4 races, 0 wins, 0 top fives, 2 top 10s, 2 top 15s, 2 top 20s
UP NEXT -
Saturday at Greenwood Valley Action Tracks in Orangeville, Pa.
MEDIA LINKS -
Website: http://www.joeyamantearacing.com/
Facebook: https://www.facebook.com/joeyamantearacing/
Twitter: https://twitter.com/joeyamantea88J
SPONSOR SPOTLIGHT - JPA Masonry
JPA Masonry, which is located in Mt. Pocono, Pa., is a trusted and experienced masonry leader in the Poconos. Although established in 2001, contractor and owner, Joseph P. Amantea (JPA), has almost 20 years of experience in the masonry field, including custom stone and design. For more information, visit http://www.JPAMasonry.com.
"JPA Masonry drives our race team," Amantea said. "Without their support I wouldn't be able to race. I'm very appreciative of all they do for me."
Amantea would also like to thank Amantea Real Estate, Hyper Racing, Jet Signs, Radical Race Gear, Pensyl Enterprises and Gilroy Northeast Inc. Excavating and Construction for their continued support.
INSIDE LINE PROMOTIONS -
Inside Line Promotions specializes in affordable public relations and media management for motor sports drivers, teams, sponsors, tracks, series, events, organizations, and manufacturers. ILP Founder Shawn Miller leverages professional journalism with new media technologies and social networking to improve your exposure and the return on investment for your sponsors.
To meet the media relations needs of your program by joining Team ILP, contact Shawn at 541-510-3663 or Shawn@InsideLinePromotions.com . For more information on Inside Line Promotions, visit http://www.InsideLinePromotions.com.
Posted by Bill McIntyre at Monday, May 18, 2020