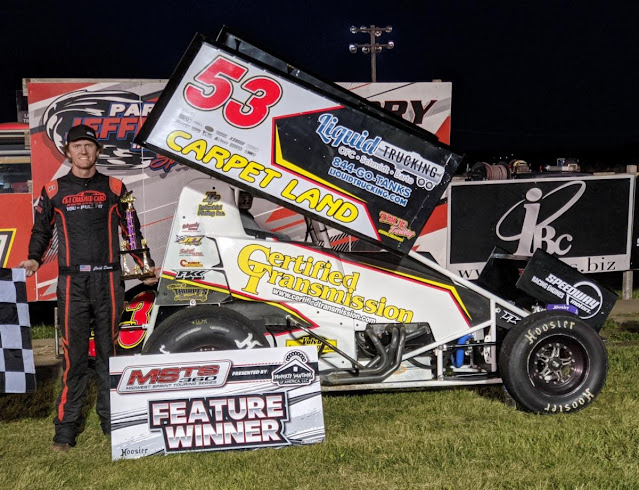 Inside Line Promotions - NORTH SIOUX CITY, S.D. (May 26, 2020) - Jack Dover is off to the hottest start of his sprint car career.
Dover earned his second straight triumph - in less than one week - during his third race of the season last Saturday at Park Jefferson International Speedway, where he debuted his No. 53 after spending the first two races behind the wheel of Chris Roseland's No. 84.
"Any time you can win it's awesome, but to get back-to-back wins is a great start to the season," Dover said. "Hopefully this continues."
Dover broke out a brand new car for the 4th annual Memorial Duels featuring the Carpet Land Nebraska 360 Sprint Series and the Midwest Sprint Touring Series. He kicked off the action by maneuvering from sixth to win a heat race.
"We had a bunch of confidence because of the win last Sunday," he said. "That helps going into a show like that. We didn't know how it was going to go because it's all new stuff on my car. We were a little hesitant, but it pretty much drove like my car last year. It felt good.
"We got up to second pretty quick in the heat race. Everyone was running around the top. I searched around and found the bottom line in turns three and four. There was still a little moisture down there. I ran down the leader and got past him on Lap 7. The last three laps we were down quite a bit of power. All the nozzles plugged up. I was riding around hoping we wouldn't get passed."
The performance earned Dover a spot into the feature redraw and he pulled the No. 1 to garner the pole position for the main event, which was shortened to 18 laps because of track conditions.
"When we get a new fuel tank we're supposed to wash them out, which we did in the offseason," he said. "After the heat we took it off and washed it again. We cleaned the nozzles and the fuel filters. It was good in the feature. That was a good track to start on the pole because it'd taken rubber. It was in the middle in turns one and two and the bottom of turns three and four. I knew I just had to save my tires and everybody would use their tires trying to get to me."
Dover did just that and maintained the top spot throughout the feature to claim the triumph.
He was slated to return to the track on Monday, but the race rained out.
QUICK RESULTS -
May 23 - Park Jefferson International Speedway in North Sioux City, S.D. - Heat race: 1 (6); Feature: 1 (1).
SEASON STATS -
2 races, 1 win, 2 top fives, 2 top 10s, 2 top 15s, 2 top 20s
UP NEXT -
TBD
MEDIA LINKS -
Website: http://www.JackDoverRacing.com
Twitter: https://twitter.com/JackDoverRacing
Facebook: https://www.facebook.com/jackdoverracing?fref=ts
SPONSOR SPOTLIGHT - True Trucking
True Trucking is a trucking company based in Gretna, Neb.
"True Trucking specializes in everything when it comes to hauling," Dover said. "They can pretty much do it all. The True's are family friends who have always been there to support me. I appreciate their partnership and look forward to reaching Victory Lane with them a lot."
Dover would also like to thank Liquid Trucking, Carpet Land, SSS Motorsports, Certified Transmission, Backlund Plumbing, Speedway Graphics, Thorpe's Body Shop, Speedway Engines, Volvo Trucks of Omaha, Husker Diesel, Spike Chassis, Sway Away, ButlerBuilt Professional Seat Systems, Keizer Aluminum Wheels, Schoenfeld Headers, Langfeldt Overhead Doors, K&N Filters, FK Rod Ends, DMI, Vortex Wings, Speedway Motors, Ostransky Farms, R&G Services and Industrial Plating for their continued support.
INSIDE LINE PROMOTIONS -
Inside Line Promotions specializes in affordable public relations and media management for motor sports drivers, teams, sponsors, tracks, series, events, organizations and manufacturers. ILP Founder Shawn Miller leverages professional journalism with new media technologies and social networking to improve your exposure and the return on investment for your sponsors.
To meet the media relations needs of your program by joining Team ILP, contact Shawn at 541-510-3663 or Shawn@InsideLinePromotions.com . For more information on Inside Line Promotions, visit http://www.InsideLinePromotions.com.
Posted by Bill McIntyre at Wednesday, May 27, 2020