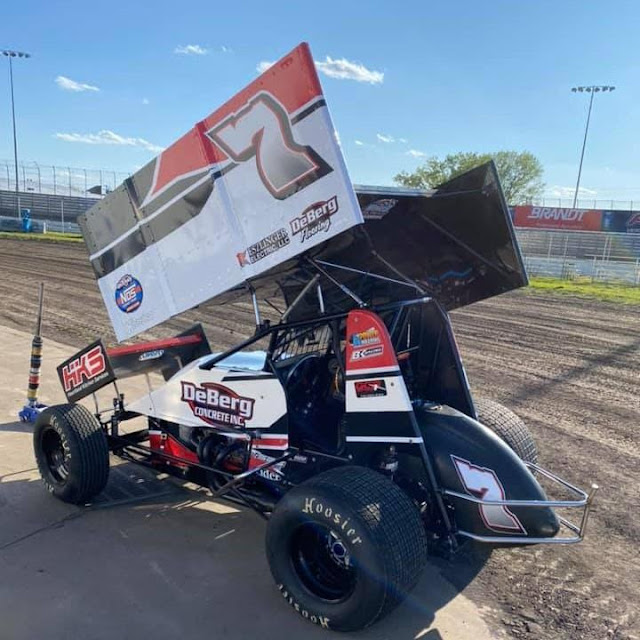 Inside Line Promotions - JACKSON, Minn. (May 19, 2020) - Justin Henderson and Mike Sandvig Racing qualified for the feature Friday night at Jackson Motorplex, where the team battled against nearly 60 competitors during the opening night of the Great Lakes Shootout presented by Tweeter Contracting and Harvey's Five Star Roofing.
"I don't think we're too far off setup-wise on the car, but we just didn't have the speed we needed and the results show that," Henderson said. "So far we've been a little conservative with the car and making changes so I think this tells us that we need to get more aggressive going forward."
Henderson kicked off Friday night by laying down a lap of 13.810 seconds in time trials. It was good enough for 14th quickest in his group and slotted him in the fifth starting position in a heat race. He passed two cars to finish third, which locked the team into the feature event.
"We haven't done ourselves any favors in time trials this season and that will hurt you with so many cars running," he said. "But the car was really good in the heat race and I felt like we were going to be extremely competitive."
Henderson advanced from his 17th starting position to the 15 th spot before an early caution negated the passes and sent him back to 18th. Following a return to green flag action, he lost the handling on the car and fell backwards. With the leaders setting a blistering pace and the field getting stretched out, Henderson ultimately settled for a 23rd-place result.
"It just felt like the tires were spinning and we just couldn't pass anybody," Henderson said. "I felt like the car came back to me for a bit when the leaders caught up to us and I could hold my own, but by then it was too late to really matter."
While the result was not what he was hoping for, Henderson takes pride in knowing that the team has opened the 2020 season with two A-Main starts in two races against stout competition.
"You try and find that silver lining in things when you are not running well and to get into the show against that many great drivers is definitely an accomplishment," he said. "It shows we are capable and are on the right track. But if we want to compete in these high-paying shows later in the year we have to get better and I have no doubt we will."
The event finale rained out on Saturday. The team will take this weekend off to regroup and is currently scheduled to return to racing May 29-30 at Park Jefferson International Speedway in North Sioux City, S.D. With the race co-sanctioned by the Ollie's Bargain Outlet All Star Circuit of Champions and the Bumper to Bumper IRA Outlaw Sprint Series, Henderson is once again expecting a large car count.
"With the way things are right now and with racing being limited everywhere, we're going to see the best drivers in the country each and every time we hit the track," he said. "Our goal is to be really competitive and to do that you've got to perform against the best. It's a great opportunity to further prove ourselves and I'm looking forward to getting back at it and running well."
QUICK RESULTS -
May 15 - Jackson Motorplex in Jackson, Minn. - Qualifying: 14; Heat race: 3 (5); Feature: 23 (17).
SEASON STATS -
2 races, 0 wins, 0 top fives, 0 top 10s, 0 top 15s, 0 top 20s
UP NEXT -
May 29-30 at Park Jefferson International Speedway in North Sioux City, S.D., with the Ollie's Bargain Outlet All Star Circuit of Champions and Bumper to Bumper IRA Outlaw Sprint Series
MEDIA LINKS -
Twitter: https://twitter.com/Henderson_racin
Facebook: https://www.facebook.com/groups/90850346221/
SPONSOR SPOTLIGHT - Morton Buildings
Morton Buildings builds the finest, pole barns, equestrian buildings, steel buildings and more. For more information, visit http://www.MortonBuildings.com .
"We've had a relationship with Morton Buildings for more than four years and they've really grown in the racing scene," Sandvig said. "We're thrilled to have such a reputable sponsor as part of our team."
Sandvig would also like to thank Eszlinger Electric, Deberg Concrete, DeBerg Flooring, R2 Enterprise, Rider Racing Engines, Winters Performance, Schoenfeld Headers, BK Racing TI Components, Triple X Race Co., Wings Unlimited, Keizer Aluminum Wheels, SBS FK Shocks, Hinchman Racewear, Heartland Kitchen Solutions and Simpson Race Products for their continued support.
INSIDE LINE PROMOTIONS -
Inside Line Promotions specializes in affordable public relations and media management for motor sports drivers, teams, sponsors, tracks, series, events, organizations, and manufacturers. ILP Founder Shawn Miller leverages professional journalism with new media technologies and social networking to improve your exposure and the return on investment for your sponsors.
To meet the media relations needs of your program by joining Team ILP, contact Shawn at 541-510-3663 or Shawn@InsideLinePromotions.com . For more information on Inside Line Promotions, visit http://www.InsideLinePromotions.com.
Posted by Bill McIntyre at Wednesday, May 20, 2020