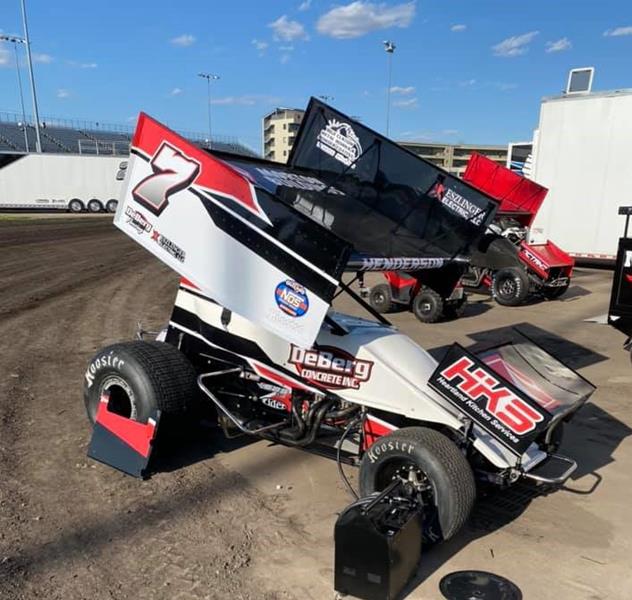 5/11/2020
Inside Line Promotions – KNOXVILLE, Iowa (May 11, 2020) – Justin Henderson and Mike Sandvig Racing began their sophomore season together last Friday at Knoxville Raceway, where the team made the World of Outlaws NOS Energy Drink Sprint Car Series main event.
While the end result was not what Henderson was hoping for, after a long offseason and with 48 of the strongest competitors in the country in attendance for the invitation-only event, he was pleased with their 2020 debut.
“I’m not really disappointed, but I think I’d be lying if I said I didn’t go in hoping for at least a top 10,” he said. “But in the grand scheme of things there were a lot of good cars that didn’t get to even run in the feature so we’ll chalk it up as not too bad of a night.”
Henderson opened the night by laying down a lap of 15.934 seconds in time trials, good enough for 12th in his group. As a result, Henderson lined up sixth in a heat race and advanced one position to finish fifth – locking himself into the feature event.
“I didn’t really know what to expect with it being the first time out this year, but I felt really fast in the heat race,” he said. “Being able to lock ourselves in and know we didn’t have to run a B Main or something was really a good feeling knowing the field of cars we were up against.”
Henderson lined up 20th in the feature and he spent most of the race hovering around that position. With the leaders fast approaching and not wanting to effect the outcome of the event, Henderson pulled off the track early and was credited with a 24th-place finish.
“I don’t think we were too bad overall, but any time you start that far back you really have an uphill battle out there,” he said. “We just didn’t quite have the speed we needed to overcome a 20th starting spot, but we left with the car in one piece and learned a bit, too.”
Next up is a trip to Jackson Motorplex in Jackson, Minn., this Friday and Saturday for the Great Lakes Shootout presented by Tweeter Contracting and Harvey’s Five Star Roofing.
With approximately 70 cars currently pre-entered to compete and with more possibly racing, Henderson noted that success will not come easy. However, he is excited to get some positive momentum rolling and see where his team stacks up against a field that represents the best drivers in the country.
“We go into every race with the confidence that we can beat anyone in the pits and that’s the way you have to do it,” he said. “Last year we had a really fast race car at Jackson and I think we found a baseline that we can be successful with so I’m looking forward to getting out there and showing what we can do.”
QUICK RESULTS –
May 8 – Knoxville Raceway in Knoxville, Iowa – Qualifying: 12; Heat race: 5 (6); Feature: 24 (20).
SEASON STATS –
1 race, 0 wins, 0 top fives, 0 top 10s, 0 top 15s, 0 top 20s
UP NEXT –
Friday and Saturday at Jackson Motorplex in Jackson, Minn., for the Great Lakes Shootout presented by Tweeter Contracting and Harvey’s Five Star Roofing
MEDIA LINKS –
Twitter: https://twitter.com/Henderson_racin
Facebook: https://www.facebook.com/groups/90850346221/
SPONSOR SPOTLIGHT – DeBerg Concrete
DeBerg Concrete Inc. is located in the heart of the Iowa Great Lakes in Spirit Lake and Okoboji. With more than 25 years of experience and a great crew, DeBerg Concrete Inc. is known for its quality work, both residential and commercial in Iowa and Minnesota.
“Deberg Concrete has been a long-time sponsor of mine and I believe they are the best in concrete finish from driveways to light foam basements,” Sandvig said. “They do it all. Contact Kevin at (712) 330-3676.”
Sandvig would also like to thank Morton Buildings, Eszlinger Electric, DeBerg Flooring, R2 Enterprise, Rider Racing Engines, Winters Performance, Schoenfeld Headers, BK Racing TI Components, Triple X Race Co., Wings Unlimited, Keizer Aluminum Wheels, SBS FK Shocks, Hinchman Racewear, Heartland Kitchen Solutions and Simpson Race Products for their continued support.
INSIDE LINE PROMOTIONS –
Inside Line Promotions specializes in affordable public relations and media management for motor sports drivers, teams, sponsors, tracks, series, events, organizations and manufacturers. ILP Founder Shawn Miller leverages professional journalism with new media technologies and social networking to improve your exposure and the return on investment for your sponsors.
To meet the media relations needs of your program by joining Team ILP, contact Shawn at 541-510-3663 or Shawn@InsideLinePromotions.com. For more information on Inside Line Promotions, visit http://www.InsideLinePromotions.com.
Article Credit: Inside Line Promotions
Posted by Bill McIntyre at Wednesday, May 13, 2020