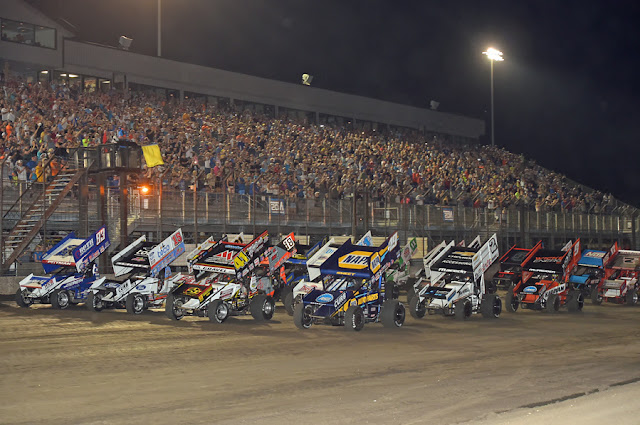 Inside Line Promotions - JACKSON, Minn. (May 13, 2020) - A whopping 75 drivers have pre-registered to take part in the Great Lakes Shootout presented by Tweeter Contracting and Harvey's Five Star Roofing, which will be hosted by Jackson Motorplex this weekend.
Because of the high demand of entries into the Outlaw Sprints Fueled by Casey's General Stores 410 winged sprint cars division, that will be the only class of race cars competing at the 4/10-mile dirt oval on Friday and Saturday. Friday's main event is $5,000 to win and Saturday's pays $7,000 to the winner. There is a rain date slated for Sunday if necessary.
Jackson Motorplex officials were forced to pull the Heartland Steel RaceSaver sprint cars presented by Wyffels Hybrids division from the Friday program because of state mandates handed down from government officials. However, there will be a make-up race for the division later this season.
This race was originally scheduled as an IRA sanctioned event on Friday, but has since exploded into the two-day Great Lakes Shootout presented by Tweeter Contracting and Harvey's Five Star Roofing with IRA support. Bill Balog, Jeremy Schultz, Jake Blackhurst, Russel Borland, Joey Moughan and more will be on hand representing the Bumper to Bumper IRA Outlaw Sprint Series.
Other top-notch racing series represented this weekend include the World of Outlaws NOS Energy Drink Sprint Car Series with drivers Donny Schatz, Brad Sweet, Jason Sides, Daryn Pittman, Carson Macedo, Sheldon Haudenschild, Wayne Johnson and Mason Daniel.
Ollie's Bargain Outlet All Star Circuit of Champions stars Aaron Reutzel, Cory Eliason, Zeb Wise and Brock Zearfoss are also intending to race along with national notables Brian Brown, Kerry Madsen, Ian Madsen, Rico Abreu, Justin Henderson, Tim Kaeding, Brent Marks, Terry McCarl, Parker Price-Miller, Trey Starks, Dominic Scelzi and Giovanni Scelzi to name a few.
Pennsylvania Posse competitors Anthony Macri, T.J. Stutts and Anthony Fiore as well as NASCAR sensations Kyle Larson, Tony Stewart and Kasey Kahne have also pre-registered. The list of pre-registered drivers can be found at http://www.jacksonmotorplex.com/team-info .
The qualifying order for Friday's program will be determined via a random draw on Thursday at 7 p.m. (Central). Anyone can tune in to watch it happen live by visiting the Jackson Motorplex Facebook page at https://www.facebook.com/JacksonMotorplex/ .
The IRA supported event format is as follows: Qualifying will be one lap per driver. The top 50 drivers in qualifying will be split into five, eight-lap heat races. The inversion is four with the top-four finishers locking into the A Main. Drivers who qualify 51st or worst will go to a non-qualifier race. The transferring drivers will move to the C Main and the non-transfers to the D Main. The five heat race winners and the five fastest qualifying transfers make up two, five-car dashes that will determine the first five rows of the main event. A Main starting positions 11 through 20 will be determined by heat race finish. The top-four finishers in the B Main will fill the A Main starting grid.
The pits will open at 2 p.m. (Central) with hot laps scheduled for 6:30 p.m. (Central) both nights.
No spectators are allowed in the grandstands or the pits either night. All CDC guidelines will be enforced and teams will be required to park a minimum of 15 feet apart as well as practice social distancing.
Both nights will feature a live video stream via Speed Shift TV, which is the official streaming partner of Jackson Motorplex. For more information, visit http://www.SpeedShiftTV.com .
RACEivers and MyLaps.com transponders are mandatory. Teams that have their own transponder should bring it because the track will have a limited number available.
Additionally, there will be a food truck in the pit area for race teams or they can order from local Jackson restaurants and it will be delivered to the track.
UP NEXT -
Friday and Saturday for the Great Lakes Shootout presented by Tweeter Contracting and Harvey's Five Star Roofing featuring Outlaw Sprints Fueled by Casey's General Stores 410 winged sprint cars
MEDIA LINKS -
Website: http://www.JacksonMotorplex.com
Twitter: http://www.Twitter.com/JacksonMotorplx
Facebook: https://www.facebook.com/JacksonSpeedway/?fref=ts
Instagram: https://www.instagram.com/jacksonmotorplex/
JACKSON MOTORPLEX -
Jackson Motorplex is a recently renovated 4/10-mile dirt oval located in Jackson, Minn. It hosts weekly races on most Fridays from May through September with Outlaw Sprints Fueled by Casey's General Stores 410 winged sprint cars, 360 winged sprint cars, Heartland Steel RaceSaver sprint cars presented by Wyffels Hybrids and NSL non-wing sprint cars presented by HitchDoc among the featured classes. For more information, visit http://www.JacksonMotorplex.com .
INSIDE LINE PROMOTIONS -
Inside Line Promotions specializes in affordable public relations and media management for motor sports drivers, teams, sponsors, tracks, series, events, organizations and manufacturers. ILP Founder Shawn Miller leverages professional journalism with new media technologies and social networking to improve your exposure and the return on investment for your sponsors.
To meet the media relations needs of your program by joining Team ILP, contact Shawn at 541-510-3663 or Shawn@InsideLinePromotions.com . For more information on Inside Line Promotions, visit http://www.InsideLinePromotions.com.
*PHOTO BY ROB KOCAK PHOTOS*
Posted by Bill McIntyre at Thursday, May 14, 2020