Michael drives Clayton Snow Racing to a top-five at Marysville 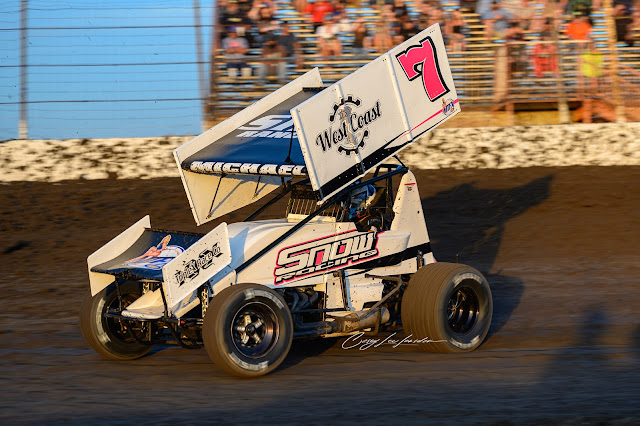 By Fully Injected Motorsports:
PLANO, Texas (May 11, 2020) – T.J. Michael’s first start of the 2020 season was impressive. Not only did the ‘Texas Traveler’ advance seven positions during main event action, Michael did so during his first-ever start for Clayton Snow Racing, all while competing at Marysville Raceway in Marysville, California, for the first time in his career.
Joining Marysville Raceway’s 360 sprint car field for the COVID-19 Challenge, Michael’s California debut on May 9 kicked-off with a fourth-place finish during heat race competition, soon followed by his skilled rally from the inside of row six to finish fourth during the evening’s main event. A restart with three circuits remaining allowed Michael to advance one final position to secure his aforementioned finish.
“That was a lot of fun,” Michael said, driver of the Snow Racing/West Coast Race Parts/No. 7 sprint car. “To be competitive like that right out of the box says so much about Clayton Snow and his equipment. Things just kinda clicked for us right from the start and we had fun the entire night. I’m excited for the opportunity to race for Snow Racing again in the future. I am more than thankful for the opportunity.”
Although Michael’s extended schedule is still uncertain due to ongoing restrictions as the result of COVID-19, the Plano, Texas-native will be making his way to Ohio to test his family-owned No. 8M sprint car next weekend. A return to California may arise if racing in the Buckeye State does not begin.
“I couldn’t be more excited right now,” Michael continued. “We’re hoping things get underway much sooner than later in other areas of the country. I want to put this momentum to good use.”
SPECIAL THANKS:
TJ Michael and Clayton Snow Racing would like to thank all of their current marketing partners including: United Mold, Inc., Gary Silva Ranches, Diede Construction, MPE Environmental, Triple X Race Co., King Racing Products, Keizer Aluminum Wheels, West Coast Race Parts.
TJ Michael and Michael Motorsports would like to thank all of their current marketing partners including: Advanced Architectural Stone, Crown Battery, Fremont Fence Company, Pro-Tech Services, Wood Heating and Air Conditioning, Kear’s Speed Shop, Wings Unlimited, Big D’s Pizza.
SOCIAL MEDIA:
Keep up with TJ Michael during his entire campaign right here at the official online home of Fully Injected Motorsports – www.FullyInjected.com. Be sure to follow Michael on all of the available social media networks including Twitter: @TJMichael8.
STATS:
2019 Wins: 1 (Waynesfield Raceway Park – FAST Series – August 2)
2020 Highlights: Driving for Clayton Snow Racing, rallied from 11th to fourth during Marysville Raceway start on Saturday, May 9.
###
CONTACT:
Photo Credit: Casey Lee
About Fully Injected Motorsports: Headquartered in Western Pennsylvania, Fully Injected Motorsports provides professional grade press releases to multiple short track teams from all areas of the country.
Posted by Bill McIntyre at Tuesday, May 12, 2020