WHAT TO WATCH FOR: Several drivers gunning for key wins at Lake Ozark Gravel, Schatz and Sweet look for repeat wins, while Larson is set to make another first start 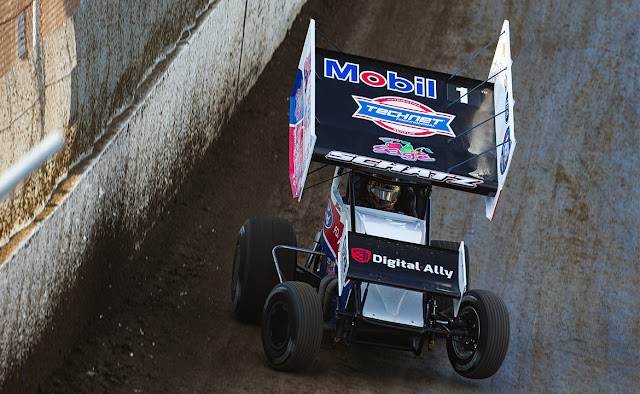 ELDON, MO – May 29, 2020 – The winged warriors of the World of Outlaws NOS Energy Drink Sprint Car Series are set to thrill Missouri race fans again this weekend with the May 29-30 events at Lake Ozark Speedway.
The doubleheader weekend will see the best Sprint Car drivers in the world battling for the $16,000 top prize between the two days, showing fans why the Series is "The Greatest Show on Dirt."
With a sold-out limited crowd both nights, all of the action can be watched LIVE on DIRTVision, starting at 6 p.m. (CT) / 7 p.m. (ET).
Here are the top stories to follow throughout the weekend:
SCHATZ AIMING TO REBOUND: Ten-time World of Outlaws champion Donny Schatz found himself having to use a rare provisional to start the Feature last week at Federated Auto Parts Raceway at I-55. He was still able to make an impressive charge from 25th to eighth in his Tony Stewart/Curb-Agajanian Racing #15. He had a seventh-place run the night before but hasn’t found the top-five since his win at the season opener in February.
Going into the doubleheader weekend at Lake Ozark Speedway, Schatz is one of only three drivers on the 37-car entry list that has a win at the 1/3-mile track – earned in 2018. He’ll be on the hunt to rebound from I-55 and claim another win at the track. He’s currently only five wins away from a milestone 300 career wins.
ANOTHER FIRST FOR LARSON: Kyle Larson will another World of Outlaws debut at a Missouri dirt track his weekend at Lake Ozark Speedway in Eldon, MO. Last weekend, the Elk Grove, CA driver made his debut at Federated Auto Parts Raceway at I-55 in Pevely, MO, setting a new track record the first night and winning the $20,000-to-win Feature the next night.
Like I-55, Lake Ozark Speedway is a 1/3-mile track. If Larson is able to grab another victory during the doubleheader event, it would be his 10th career World of Outlaws win.
SWEET’S WINNING POTENTIAL: Reigning champion Brad Sweet is currently the only driver this season with more than one win in the first six races. He’ll look for another victory this weekend at Lake Ozark Speedway, where he won last year in April.
The Grass Valley, CA driver put his Kasey Kahne Racing #49 in Victory Lane during the DIRTcar Nationals in February and then again last weekend at Federated Auto Parts Raceway at I-55, holding off brother-in-law Kyle Larson to do so.
HOME ADVANTAGE FOR JJR/DIETZ: Jason Johnson Racing, located 15 minutes from Lake Ozark Speedway, will look for another home win this weekend. David Gravel, of Watertown, CT, gave JJR its first win at the 1/3-mile track in October during the Jason Johnson Classic. The track is also one of Gravel’s best. He has yet to finished worse than second in three races there.
JJR’s crew chief Philip Dietz – who guided Gravel to the win at Lake Ozark last year – also owns Dietz Motorsports, which is based out of the JJR shop in Rocky Mount, MO. He’ll look to capture his first win as a car owner with driver Parker Price-Miller, of Kokomo, IN, at the Missouri track.
SHARK RACING PRIMED TO GO: The Pennsylvania-based Shark Racing team had one of its best combined performances last weekend at Federated Auto Parts Raceway at I-55. Logan Schuchart continued his streak of not finishing outside the top-five this year and teammate Jacob Allen also earned a top-five and led laps – a first for both feats this season.
The Drydene-sponsored duo will look to keep that momentum going this weekend at Lake Ozark Speedway. A win at the track would be Allen’s first career victory in more than 300 starts and for Schuchart it would be his second of the year – he earned his first win at Volusia Speedway Park. Schuchart also continues to lead the championship points for the first time in his career – currently two points ahead of Brad Sweet.
TYLER COURTNEY 2020 DEBUT: Tyler Courtney, the 2018 USAC National Sprint Car champion and 2019 USAC National Midget champion, of Indianapolis, IN, will make his 2020 debut with the World of Outlaws at Lake Ozark Speedway. Driving the NOS Energy Drink #7BC for Clauson-Marshall Racing, Courtney will attempt to make his sixth career Feature start with the Outlaws.
He’s already had success in a winged 410 Sprint Car this year in Missouri, winning a track event at St. Francois County Raceway in his first race out with the new car. So far, his career best finish with the World of Outlaws is 17th at Eldora Speedway in 2016.
Posted by Bill McIntyre at Friday, May 29, 2020