World of Outlaws Announces 16-Race Schedule through Mid-June Sprint Cars Friday at Knoxville; Late Models May 15-16 at Federated I-55 with fans 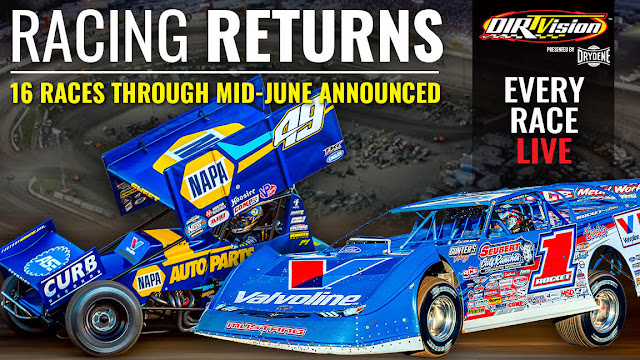 CONCORD, NC — May 5, 2020 — The World of Outlaws NOS Energy Drink Sprint Car Series and the World of Outlaws Morton Buildings Late Model Series, together with their partner tracks, have updated schedules into mid-June in an effort to safely “Return to Racing” in a manner that allows tracks, teams, partners and fans to begin looking ahead.

The World of Outlaws NOS Energy Drink Sprint Car Series is set to race Friday night, May 8, at Knoxville (IA) Raceway in a $10,000-to-win, “behind-closed-doors” Invitational by McKay Insurance with Nationwide.  While spectators will not be able to attend in person, fans across the world can watch live on DIRTVision presented by Drydene.

“The Greatest Show on Dirt” will next race May 22-23 at Federated Auto Parts Raceway at I-55 in Pevely, MO, in front of a limited, socially distanced crowd in events paying $6,000-to-win on the Friday night and $10,000-to-win on Saturday night.

On May 29-30, the world’s premier Sprint Car series will shift to Lake Ozark Speedway in Eldon, MO, for another $6,000/$10,000, Friday/Saturday event in front of a limited, socially distanced crowd. The previously scheduled Jason Johnson Classic will be held at a later date.

In June, the World of Outlaws will return to Knoxville Raceway, June 12-13, as originally scheduled for the Brownells Big Guns Bash, currently with no crowd, but with the hope that some fans may be permitted by that date.

Events originally scheduled for May 23 at The Dirt Track at Charlotte, May 25 at Lawrenceburg Speedway, May 29 at Lake Ozark Speedway, May 30 at I-70 Motorsports Park and June 3 at I-80 Speedway have been postponed. Fans with tickets to those events will be able to use them when rescheduled dates are announced.

The always popular June 5 event at River Cities Speedway in Grand Forks, ND, and June 6 at Granite City Speedway in Sauk Rapids, MN, remain on the schedule, with a final determination being made closer to the event dates based on local guidelines.

As Friday night’s event at Knoxville Raceway will be run without fans in attendance, DIRTVision is offering a special 20%-off promotion using code RETURNKNOXVILLE, which is good through 11:59 pm ET Wednesday, May 6th. For details, visit DIRTVision.com.

The World of Outlaws Morton Buildings Late Model Series is also adjusting its schedule, with action resuming May 15-16 at Federated Auto Parts Raceway at I-55 rather than the previously announced Boone Speedway. The fast-changing landscape has provided the opportunity to shift the Series re-opener to Pevely, MO, in front of fans on a limited basis. Federated I-55’s location also makes it convenient and cost-effective for late model teams who may compete earlier in the week at Lucas Oil Speedway in Wheatland, MO. The Series thanks the tireless efforts of Robert Lawton, Coty Mallicoat and Cody Sommer for their work to bring a “Return to Racing” to Boone, and is looking forward to the Series debut at Boone for the previously postponed Hawkeye 100 mega-event at the historic Iowa venue at a time when the race can be run in front of a live audience. We also wish our friends at Boone the best of luck as they prepare to get back to the track in their own unique fashion in the very near future.

Next up the World of Outlaws Morton Buildings Late Model stars will head to the magnificent Jackson (MN) Motorplex for the series debut on May 22-23 for $6,000/$10,000 events on Friday and Saturday provided Minnesota opens on schedule on May 18. Following the traditionally DIRTcar-sanctioned Dream weekend at Eldora Speedway on June 4-6, broadcast on FloSports, the Series will resume action June 12-13 in a $6,000/$10,000 Friday and Saturday event at Cochran (GA) Motor Speedway in front of a limited crowd.

The originally scheduled races May 29 at Jacksonville (IL) Speedway and May 30 at Tri-State Speedway in Haubstadt, IN, have been postponed.

Tickets to all limited crowd events will go on sale in the very near future and be available through WorldofOutlaws.com. Participant and Spectator Guidelines will be enforced consistent with State, County, City and World of Outlaws procedures. Expectations for all attendees will be communicated in advance. The events at Knoxville and I-55 will run with the previously announced 48-car maximum field size. The events to follow will require advance registration, but field sizes will be limited only by track-specific pit area size, parking teams in every other pit stall.