CISNEY FIRST TO SCORE SECOND WIN OF THE SEASON; Rittenhouse Makes it Two for Two 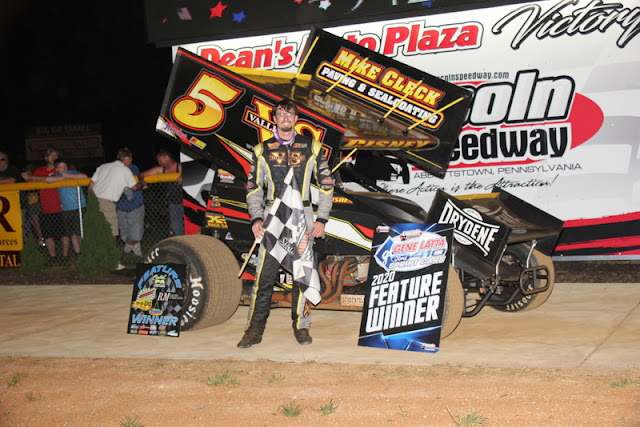 Abbottstown, PA (June 6, 2020) – Dylan Cisney led wire-to-wire for his second win of the season and his second career win at Lincoln Speedway. With his win on Saturday night, Cisney was the first driver with a repeat win at the track in 2020.

Cisney started on the pole of the 30-lap feature with Glenndon Forsythe lined up on his outside.

Cisney shot out to the lead while a battle for third ensued between Dalton Dietrich, Kyle Moody and Dylan Norris.

Dietrich emerged victorious and took the third spot with Moody settling into fourth when the red flag came out before the first lap was completed. Chad Trout, last week’s winner, ended up on his side in turn 4. Scott Fisher, Tim Glatfelter, Freddie Rahmer and Brian Montieth were also involved in the incident. Rahmer, Glatfelter & Montieth rejoined the field after a visit to the pit area. Fisher also rejoined the field after pushing off from the accident scene.

Cisney and Forsythe paced the field for the restart. Cisney got out to the lead again and this time the battle was for fourth as Troy Wagaman Jr challenged Moody for the spot.

Moody had his sight set on third despite the charge from Wagaman Jr. Moody and Dietrich raced wheel to wheel at the line on lap 2 with Dietrich holding on to third. Moody wasn’t going away and ran the top around the track to take the third spot on lap 3 from Dietrich.

Tim Wagaman wasn’t far behind and got by Dietrich on the inside of turns 1 and for fourth on lap 4. Wagaman Jr followed moving into the top five on lap 5.

Cisney caught the tail end of the field on lap 8 with a 2.592 second lead over Forsythe. Cisney was able to increase his lead in lapped traffic.

Wagaman reeled in Moody and a battle for third was underway with both drivers running the top line around the 3/8th mile oval.

Forsythe, Moody and Wagaman, running second, third and fourth, were under a blanket mid-way through the 30-lap feature. All three drivers were running the top line around the track.

The caution flag flew on lap 18 for Freddie Rahmer who caught the wall in turn 3 after running three wide down the back stretch with Jim Siegel and Montieth. The three were running for the 17th spot.

Cisney led Forsythe, Moody, Wagaman and Wagaman Jr. to the cone for the single file restart. Cisney drove through the middle of turns 1 and 2 with Forsythe going to the top on the restart. Moody ran the bottom trying to gain on Forsythe with Wagaman on his bumper.

Moody was getting a good run off of turn 2 but Forsythe was the better car coming out of turn 4.

Lap 24 saw another yellow flag when Cale Thomas got turned around in turn 4.

The field lined up for the restart with six laps to go. The top five were Cisney, Forsythe, Moody, Wagaman and Wagaman Jr.

Current point-leader Brandon Rahmer got under Chase Dietz for sixth in turns 1 and 2 on the restart. Cisney maintained the lead and had a 1.103 second advantage over Forsythe with five laps to go.

Cisney raced to the checkered flag 3.034 seconds ahead of Forsythe. Moody crossed the line third. Wagaman finished fourth and Wagaman Jr. rebounded from a mechanical failure the week before for a fifth place finish.

Heat winners for the 410 sprints were Dylan Cisney, Dalton Dietrich, Glenndon Forsythe and Tyler Walton. Jeff Halligan was the hard charger in the main event advancing 11 spots from his 23rd starting spot to finish 12th. 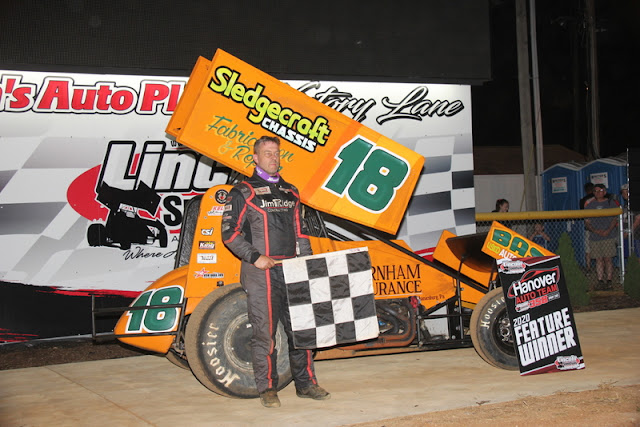 Rittenhouse Makes it Two for Two

Rittenhouse lined up fourth for the 20-lap feature on Saturday night. After starting on the pole last week and leading wire-to-wire, Rittenhouse would have to find a way to the front of the field to land in victory lane.

Tim McClelland lined up on the pole with Dave Brown to his outside. Rittenhouse shared the second row with 358-rookie Zachary Newlin.

McClelland had the lead at the line with Brown close behind. Brown took the lead racing through turns 1 and 2 but the red flag came out before the first lap was in the books. Brett Wanner flipped in turn 1 with Dylan Orwig and Hayden Miller also involved in the incident.

Despite a strong start Dave Brown headed to the pit area during the red. Brown’s loss was Newlin’s gain as he lined up on the outside of row 1 for the complete restart. Brown was able to rejoin the tail end of the field.

McClelland started strong with Newlin following him on the bottom. Alyson Dietz was up to third, but Rittenhouse took the spot at the line and immediately went to work on Newlin for second.

After making two starts in his 410 sprint car, Doug Hammaker was back running his 358 sprint and had made his way up to fourth from his ninth starting spot when the caution came out again on lap 2. Alyson Dietz who was running fifth got spun around in turns 1 and 2.

Once again McClelland took the lead on the restart while a three car battle for third was underway between Newlin Rittenhouse and Hammaker.

Rittenhouse got second from Newlin right before the caution came out again on lap 3. The yellow was for Brett Strickler who spun out in turn 3.

McClelland paced the field and led Rittenhouse, Newlin, Hammaker and Matt Findley to the cone for the single file restart.

Rittenhouse went to the top of the track to challenge for the lead while Newlin held off Hammaker as he challenged for the third spot.

Rittenhouse drove to the top again in turns 1 and 2 and took the lead from McClelland coming out of turn 4 on lap 4.

Newlin held onto third running the bottom with Hammaker all over him for the spot. Hammaker got by Newlin for third coming on lap 6 coming out of turn 4.

Hammaker was all over McClelland as they both worked on getting by a lapped car. Hammaker got the spot but the caution came out on lap 13 for Hayden Miller who got spun around in turns 3 and 4.

The top five for the restart were Rittenhouse, McClelland, Hammaker, Newlin and Findley.

Hammaker tried the outside to get by McClelland for second but the bottom kept working for McClelland’s number 6 machine.

Hammaker was riding the edge throwing everything he had at McClelland and lost some of his momentum with four laps to go. Even with limited laps remaining, Hammaker reeled McClelland in once again. On the final lap in the final turns Hammaker made one last ditch effort to get by McClelland but ending up spinning out and was scored 21st.

Next Saturday, June 13, Lincoln Speedway is back in action with 410 and 358 sprint cars for the Fallen Firefighters Night in Memory of Brandon Little. Racing starts at 7:30PM with pit gates opening at 5:00PM and grandstand gates opening at 5:30PM.