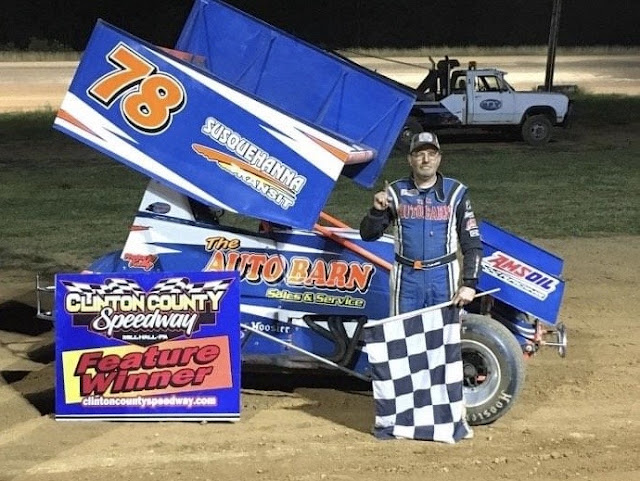 Mill Hall, PA – The Clinton County Speedway opened its 2020 racing season on Friday Night featuring the Laurel Highlands RaceSaver Sprint Cars, presented by Gary’s Motor Mart.  Dale Schweikart of Linden claimed the victory in the 25-lap event in a contested battle with his son, Dakota Schweikart.   Other winners of the night include Garret Bard in the 600 Micro Sprints, Jeffrey Weaver of Lock Haven in the 270 Micro Sprints, Robert Tressler of Lock Haven in the Pro Stocks and Maddox Smith of Renovo in the 4 Cylinder Division.

Dakota Schweikart and Jared Zionkowski of Wyalusing led the field of 25 sprint cars to the green flag.  After the completion of the first lap, four cars tangle in turn three to bring out the caution.  While under caution, Zionkowski’s car came to stop on the front stretch forcing him to the pits where his crew was able to make a repair and have him rejoin at the rear of the field.  Zionkowski’s misfortune allowed Dale Schweikart to move to the front row for the restart along side his son.

Dakota Schweikart led his father in a contested battle for the lead, with Dakota running on the low side of the speedway forcing Dale to try to make a pass on the high side.  After several attempts of trying to pass Dakota, Dale made the pass at the completion of lap number eight, with Jeffrey Weaver, Scott Lutz and Garret Bard running in the top five.  By lap number 12, the leaders were beginning to encounter lapped traffic.  Larry McVey of Bordentown, NJ advanced from twelfth starting spot to contest with the top five by the midway point of the race.  The final caution of the event came out on lap number 18, when Dylan Proctor of Lock Haven and Todd Lynn of Hollidaysburg spun in turn number two.

Dale Schweikart was able to hold off the late race challenges by his son to pick up the victory.  “It’s a neat feeling and proud moment to race against my son, but I was faster in turns 3 and 4 and was able to make the pass,” said Dale Schweikart. “It a great night when you can finish one-two.”  Weaver, Lutz and McVay completed the top five.  Jacob Gomola of Seneca charged from the 24th spot to finish 6th, Garret Bard, Kruz Kepner, Zionkowski, and Proctor completed the top ten.  Heat races were won by Lynn, Weaver, and Lutz.

In Pro Stock competition, Tommy Dawson and Brad Myers lead the field for the initial start with Myers taking the early lead.  During a caution on lap number two, Myers stopped on the track, giving up the lead to Dawson.   Dawson commanded most of the race, with a heated battle between Robert Tressler, Ay Schilling, Noah Jensen, and Kevin VanAmburg for the top 5.  Tressler made a pass for the lead on lap number twelve and Jensen moving into second place on the final lap.  Tressler picked up the win over Jensen, Dawson, VanAmburg, and Brandon Moser.  Sixth through tenth were AY Schilling, Corey Long, Mark Bitler, Brad Benton, and Brad Myers.  Heat racess were won by Tressler and Schilling

The 270 Micro Sprints saw Sean McAndrew and Kyler Stahl lead the field for the initial green flag.  Fifth place starter Jeffry Weaver took command of the field by the second circuity with McAndrewl, Troy Whitsel, Ethan Spotts and Bobby Sanso running in the top five.   The red flag came out on lap 13, when four cars came together, and one car tipped over on its side.  All drivers were okay.   In the final laps Weaver held off McAndrewl, Whitesel, Sanso and Spotts.  Sixth through tenth were Stahl, Dan Wertman Timmy Bitner, Denny Rineheimer, and Hunter Zimmerman.  Heat races were won by Whitsel and Spotts.

The Glen O Hawbaker 4 Cylinders made their debut with a new stock rules package.   The division premiered with 9 cars in competition, with several cars planning to be completed in the coming weeks.   Maddox Smith and Tyler Watson set the pace for the start of the feature event. Smith jumped out to the early lead and led every lap of the 12-lap feature event to claim his first career victory.   Sterling Kepner raced from the 6th spot to finish second, Michael Boring was third, Kennedy Courter finished fourth, and Zachery Rill finished fifth

The Clinton County Speedway returns on Friday, July 3rd with a 5 division show featuring the Limited Late Models.   The race will be a Limited Late Models – Semi Late Model Challenge event sponored by G.F.Y. Racing Supply.  The top three semi late models will receive a bonus of $100, $50, $25 respetively complements of G.F.Y. Racing Supply.  In addition the Pro Stocks, 600, 270s ,and 4 Cylinders will be part of the racing program.  Gates will open at 5:15, Hotlaps at 7PM and Racing at 7:30PM.  For the most recent news about the speedway, visit the website at www.clintoncountyspeedway.com or follow the speedway on Facebook.