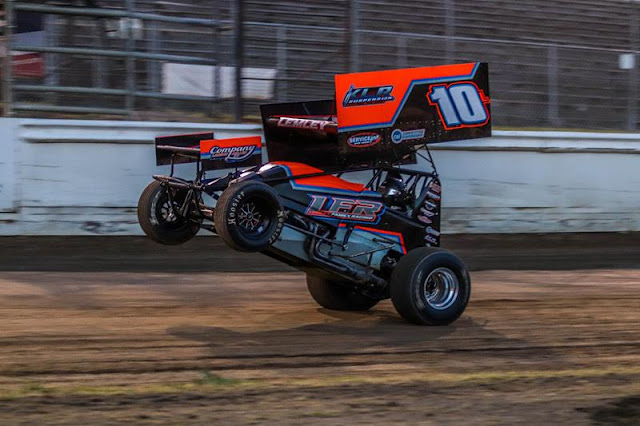 Alger, WA - After last week’s margin of victory (.061 between Eric Fisher and Colton Heath) in the 360 sprint cars, many thought that a repeat or better performance would be near impossible...except for Brock Lemley. Essentially saying “hold my Budweiser” to last week’s dynamite finish, Lemley took the win on week two of Thursday Night Thunder on SkagitSpeedway.TV, beating Colton Heath in a slobberknocker of a main event by .048 seconds.

Lemley started on the outside of row one and would lead handily for the first 12 laps before slower traffic became an issue. Showing patience in working past the slower cars, Brock saw Heath close from a full straightaway behind to just a car length or two before getting into clean air again briefly. Brock expanded his lead briefly, but three cars all racing for position at the back of the field brought Colton right back to his rear bumper. As the pair started working into those three, Heath used the low side of the track to take the lead for the 22nd and 23rd laps. Neither could quite find the perfect line to clear any of the slower cars, but Brock found some room up top to build momentum and made a diamond move in turn three and four coming to the line to complete lap 23, driving underneath Heath and forcing Colton into the middle groove through the first turns. Spinning his tires in the slick middle of the track, Heath watched Lemley try to force his way under some of the slower traffic but couldn’t get past or reestablish much of a lead coming to the white flag. With one to go, Brock committed to the low side while Colton rallied the cushion, making a huge run through the topside of the three and four as the pair raced to the line. Flying his right front a bit out of the corner, it was Lemley out drag racing Colton to the finish by .048. Travis Jacobson put together a third place run.

The Sportsman Sprint main event saw wild tumbles, flips and heavy traffic, yet one driver stayed out front and out of trouble the whole way, Chase Goetz would lead all twenty five laps of the main event, but unfortunately, failed to meet minimum weight requirements in post race inspection, giving Bill Rude his first win in a number of seasons. Steve Parker and Cory Swatzina were second and third.

In Northwest Focus Midget Action, Evan Margeson showed himself as the class of the field in taking the win. Margeson drove past Nik Larson and into the lead on lap five, leading the next twenty without challenge en route to the win. While Margeson was all by himself, an intense battle waged for second through seventh. When the dust settled, Jared Peterson made his way into the runner up spot and Colton Heath rolled to third.