Macri makes it two in a row on Valley Supply night at Port Royal Speedway, Sweigart and Hammaker Pick Up Wins as Well 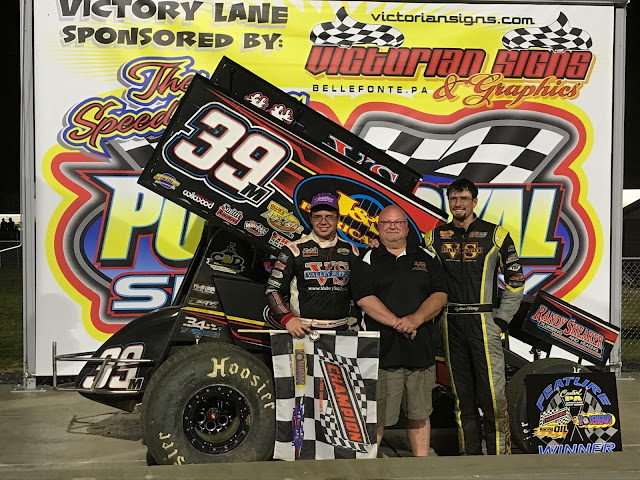 Port Royal Speedway- PORT ROYAL, Penn- (June 20, 2020)- Entering the 2020 race season, Anthony Macri made it clear that he intended to be a regular at Port Royal Speedway. Coming off a breakout season that saw the young Dillsburg, Pa. native pick up his first career victory at 'The Speed Palace' to go along with a podium finish to close out 2019 against the World of Outlaws, Macri indeed looked ready to take the next step.

However after two races, with racing limited in Central Pennsylvania due to the effects of COVID-19, Macri headed out West to compete with the World of Outlaws and at the Knoxville Raceway. As racing started back up last weekend, Macri came in looking refreshed and ready to go as he picked up the win Sunday to close out a weekend doubleheader.

Saturday night he showed he will be a force to reckon with for the rest of the season as Macri outdueled Dylan Cisney on Valley Supply Open Wheel Madness 1 night to pick up his second consecutive Weikert's Livestock Sprint Car win at the Juniata County oval and another $5000 prize.

"I can't thank Jim (Shuttlesworth) enough as he gives me a slot car here and all I have to do is control the throttle and this thing just rolls around here," said Macri, thanking his crew chief. "We're coming back next for three in a row."

Unlike last week where Macri started on the front row and lead every lap, this week he had to work for it. It was a young-gun front row as Justin Whittal and Jeff Miller led the field to the green flag, with Miller getting the early advantage entering turn 1. However, Whittal pulled under last years Speedway Rookie of the Year on the backstretch to take the lead entering  turn three and lead lap one at the line.

Meanwhile it was sixth place starter Cisney and seventh place starter Macri who were making early moves. By lap five Cisney was sitting in the 3rd position and tracking down Miller while Macri was in fifth and battling for fourth.

Four laps later, with Whittal holding a 1.4 second advantage, Cisney used a slide job in turn's 1 and 2  to move into the runner up spot and Macri used the bottom of the track to take 4th at the line. The following circuit Macri passed Miller for third.

Whittal was struggling with lap traffic by lap 12 and after trading slide jobs with Cisney in both corners, Cisney overtook him for the lead on lap 12. Macri was lurking just behind both cars in third, trailing by a nose, and he passed Whittal for the second position in turn three and set his sights on Cisney.

Macri was hot on the tail tank of Cisney over the next two laps. Cisney was able to gain some breathing room as he put a lap car between himself and Macri on lap 15, but the race's only caution flew one lap later for a slowing Brent Marks, wiping out the advantage and setting up a nine lap scramble.

On the restart, Cisney got a good jump on Macri and used the middle of the Speedway to pull away. Two laps later though, Macri made his move as he pulled a  slide job in turn's one and two to take the lead. Cisney returned the favor in  turn's three and four to briefly retake the lead, but Macri was able to cross under him coming to the line to lead lap 19.

"I was pushing hard in the beginning and I knew it was time to go, " said Macri. "It’s always easier running second in traffic than leading and I was just able to make it work there."

Cisney tried to regroup over then final six laps and was within striking distance of Macri as he pounded the cushion of the speedway trying to dispose of lap traffic. Multiple times in turn's three and four over the final two laps Cisney ducked under Maci, but both times Macri was able to pull away.

When the checkered flag flew it was Macri by 1.120 seconds over Cisney, Whittal, TJ Stutts and Logan Wagner. Wagner got upside down in his heat race and transferred for the feature via the B-Main and was awarded the night's $400 hard charger award courtesy of Valley Supply as he passed 15 cars from his 20th starting position.

"I could hear him back there and I knew he was there," said Macri. "I knew if I messed up at all it was going to get interesting there at the end and I'm glad we could hold on and make it two in a row."

For Cisney, he thought he had the car to beat in clean air and was surprised Macri was able to get by him. However, he was really happy for his sponsor (Valley Supply) to have the top two cars on the front stretch that they sponsor.

"I was a bit surprised when he got by us like that on that restart. The car was just about perfect in clean air and I was rolling the middle good," said Cisney. "The car felt so good and I really didn’t think anyone was going to get us. They're just on a roll right now  and it’s nice to have two Valley Supply cars sitting one and two. I just wish it was the other way around."

Following a disappointing wreck last week in the Penns Valley Meat Market PA Sprint Series/IMCA 305 Sprint Car feature event, 'Nitro' Nick Sweigart got some redemption as he led all 20 laps for his third career victory at the Port Royal Speedway.

"We may have started on the pole but it was anything but easy out there," said Sweigart. "We had a bit of a tough start to begin the season last week so this is a nice way to get redemption and get back on track."

Sweigart and Derek Hauck led the field to the green flag with Sweigart quickly jumping to the extreme top of the Speedway to lead lap 1. Third place starter Jake Frye moved into the runner-up position while 10th place starter and last week's winner Garrett Brad was already to fourth.

By lap six Sweigart held a full straightaway lead on the field and the following lap Bard got by Frye for third using the low line of the speedway. Brad passed his way to second on lap 12 and began to set his sights on Sweigart.

By lap 18, Bard had cut the lead in half as Sweigart was deep in heavy lap traffic. However, Sweigart was too good on the top of the Speedway and Bard was never  ever to mount a serious challenge for the lead.

Sweigart took the checkered flag by 1.839 seconds over Bard, Dave Grube, Larry McVay and Hauck. Doug Dodson drove his way from 20th to sixth to earn a $100 hard charger bonus via Penns Valley Meat Market while Frye, Christian Rumsey and Erin Statler and Tom Carberry rounded out the top ten.

"It was a tough track to figure out as I almost spun out a couple times trying to get to the top," said Sweigart. "This place is my favorite track to race at, so I'm just thrilled to be in victory lane again."

Bard thought he had the car to beat and was hoping for a late caution to see if he could've got by Sweigart.

" A caution would've been really nice, but it just wasn't in the cards tonight I guess," said Bard. "I was really good on the bottom, but the lap cars were all running down there and I just couldn’t get comfortable anywhere else to really make a move."

Doug Hammaker pulled off a last corner pass of Brett Wanner on the outside of the Speedway to claim the 358 Summer Series feature event for the second consecutive year.

The win, worth $1500, tied him with his father Dale Hammaker for sixth on the all-time win list at the Speedway in the division.

"I just put the wing to the trunk and went all the way to the top and tried to see what I could make happen," said Hammaker. "I feel bad for Brett as I pretty much did the same thing to him last year, but winning here is special and it means a lot to me."

Wanner and Eric Parker led the field to the green flag and it was Wanner getting the early advantage. However, before any laps could be completed the red flag came out when Colton Hoover went out over the turn three guardrail. He was ok.

Wanner once again took the lead on the restart as he held off a slide job attempt of Parker. Third-place starter Derek Locke moved into the second position one lap later and started tracking down Wanner for the lead.

With Wanner running the middle of track surface and Locke on the bottom, the front two were nose to tail on lap five when a caution came out for a spinning Tyler Templin

On the restart it was Wanner again out front, while Hammaker, who started eighth, was beginning to make his move as he entered the top five in the first turn.

Hammaker moved into fourth position on lap 14 and used the top of the Speedway the following lap in turn's three and four to pass Kevin Nouse for third.

With the leaders nose to tail, Hammaker capitalized and got by Locke for second on the top of the speedway exiting turn four to move into the runner up spot on lap 17.

Two laps later, the final caution of the race fell  when Jay Kraut got turned around, setting up a six lap dash for the checkered flag.

Hammaker tried a slide job after the field returned to green flag action, but couldn't make the move stick.

On the white flag lap, Hammaker pulled alongside of Wanner racing to the flag stand and led by a nose. Wanner slid back under Hammaker entering turn one and pulled ahead down the backstretch into turn three.

However Hammaker had the momentum and got to the outside of Wanner exiting turn four and in a drag race to the flag stand took the checkered flag by a margin of .547 second over Wanner, Locke, Nouse and Cody Fletcher.

"I was kind of setting him up those last five laps and I was just hoping it would pay off," said Hammaker. "I wish every track gave us a surface like this as I could really run well anywhere. I love winning in this division and at this track."

For Wanner, it was another disappointment as he led 23 laps and was really hoping to bring home the win.

"It's heartbreaking as I really want to win at this track so bad, but I guess I'll just have to be second best tonight." said Wanner. "We tore up a car a few weeks back and we haven't been able to practice this one at all. To get a second with really no testing, you can’t be too upset I guess."