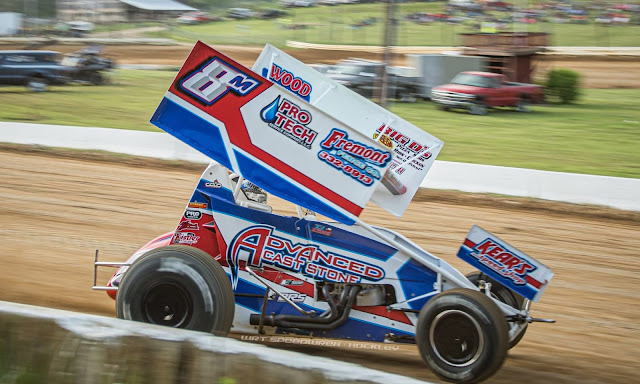 FREMONT, Ohio (June 29, 2020) – Finishing just one position shy of perfect, the ‘Texas Traveler’ T.J. Michael did everything he could to earn a second-ever FAST Series feature win on Saturday night at Wayne County Speedway, but Buckeye veteran and local favorite Dean Jacobs beat him to the stripe.

A great night for the stat book, the runner-up result was Michael’s top performance of the season, thus far, kicking-off the evening with a second-place finish during his respective heat race.

“It was a great night for our team. We certainly needed that one,” Michael said, who owns one FAST Series win while in action at Waynesfield Raceway Park. “I can’t thank everyone who is a part of this team enough. We have the equipment and the ability to win races and that’s what we are working toward. Finishing second can leave a sour taste at times, but it’s tough to be mad about getting beat by Dean (Jacobs). He knows his way around Wayne County. Hopefully we can put this momentum to use and get that extra spot during Wayne County’s speedweek race.”

Other recent results for T.J. Michael includes finishing 18th at Attica Raceway Park one night prior to his Wayne County visit. The Plano, Texas-native opened his evening at Attica with the sixth-fastest time during qualifying time trials, eventually finishing fourth during his respective heat race.

Michael and Michael Motorsports will continue their 2020 campaign with a busy slate of Ohio Sprint Speedweek competition featuring the All Star Circuit of Champions. Michael’s speedweek agenda will feature upwards of seven starts beginning with Attica Raceway Park on Friday, July 3, followed by a Fremont Speedway doubleheader on Saturday and Sunday, July 4-5. Other Speedweek events on Michael’s schedule include Wayne County Speedway on Monday, July 6, Portsmouth Raceway Park on Friday, July 10, and finally, Sharon Speedway on Saturday and Sunday, July 11-12.

SOCIAL MEDIA:
Keep up with TJ Michael during his entire campaign right here at the official online home of Fully Injected Motorsports – www.FullyInjected.com. Be sure to follow Michael on all of the available social media networks including Twitter: @TJMichael8.