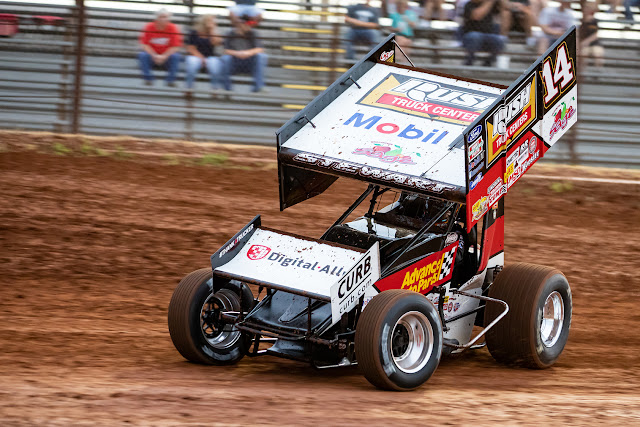 BROWNSBURG, Ind. (June 16, 2020) – Just as demanding as it was competitive, Tony Stewart and Tony Stewart/Curb-Agajanian Racing wrapped-up the 2020 edition of Thunder Through The Plains with a slew of impressive statistics, collecting four top-ten finishes in eight races highlighted with a fifth-place run at 81 Speedway in Park City, Kansas, on June 7.

Stewart’s All Star run through the Central Time Zone also included an eighth-place finish at Monarch Motor Speedway on June 12, as well as a pair of seventh-place finishes at Lonestar Speedway and Chatham Speedway on Saturday and Sunday, June 13-14, respectively. Padding the stat book, the Columbus, Indiana-native also earned Hard Charger Award honors twice during Thunder Through The Plains; 20th to 12th at Lawton on June 8 and 14th to seventh at Chatham on June 14. Although not earning the Hard Charger Award, Stewart’s eighth-place result at Monarch was the product of row ten.

Although retiring early and scored 23rd, Stewart started on the pole for the 40-lapper at Red Dirt Raceway on June 5, winning the evening’s dash to do so. An ill timed entry in turn one during the opening laps caused Stewart to lose several spots, eventually making his way pit-side.

Smoke concluded the demanding stretch tenth in the final Thunder Through The Plains standings.

“I think it was a pretty successful week. Anytime you can put up positive results against a talented group like the All Stars says a lot about your team. All we can do now is continue to find ways to improve and hopefully get back up front,” Tony Stewart said, driver of the Tony Stewart/Curb-Agajanian Racing/Rush Truck Centers/Advance Auto Parts/Mobil 1/Ford Performance/Curb Records/Sage Fruit/FloRacing/Carquest/TechNet Professional Automotive Service/Hunt Brothers Pizza/Absolute Automation & Security/Digital Ally/J&J Auto Racing/No. 14 sprint car. “Hopefully we have the opportunity to return to that area of the country and try again.”

Tony Stewart’s upcoming plans have not yet been determined. Any news regarding Smoke’s racing agenda will be posted online in the coming days.