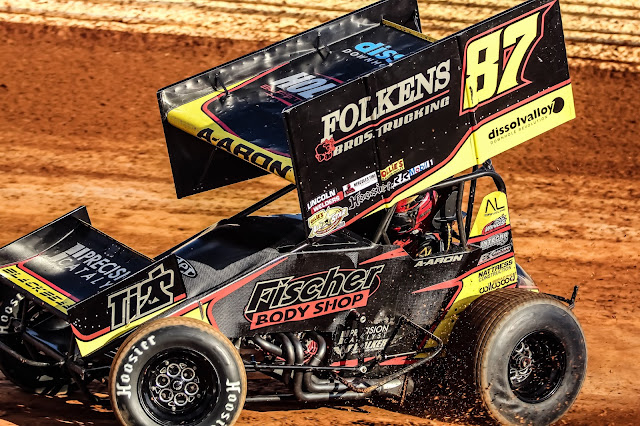 (Hartford, OH)…For the first time since the 2001 Sharon Nationals, the Ollie’s Bargain Outlet All Star Circuit of Champions Sprint Cars will be coming to Sharon Speedway for a two-day show.  This Saturday and Sunday (July 11-12), Tony Stewart’s travelling band will conclude the 38th annual Cometic Gasket Ohio Speedweek with a pair of $6,000 to-win races for the “Lou Blaney Memorial” presented by Premier Pallet & Recycling followed by Justin Snyder’s “Salute to the Troops.  Saturday’s event will include the BRP Modified Tour, while the non-wing RUSH Sprint Cars will be part of Sunday’s show.  Fans are encouraged to experience the new Infield Fan Zone and take advantage of racing from this unique perspective for just the cost of general admission.  Gates open at 3 p.m. each day with racing at 7.

Saturday’s “Lou Blaney Memorial” will celebrate the life and accomplishments of the Hall of Fame driver, who won more than 600 feature victories during a five-decade career.  The legend has at least 121 Modified wins and another 11 documented in a Sprint Car at Sharon alone.  Blaney passed away in 2009 after battling Alzheimer’s.

Due to the COVID-19 pandemic, there will be no friends and family dinner this year.  There will still be the Chinese Auction with approximately 40 baskets, Lou Blaney Memorial T-Shirts will be on sale, and there will also be the live auction starting at 5 p.m. under the pavilion in the fan zone (see current items posted below).  All of these proceeds benefit the Alzheimer’s Association.

For the sixth straight year, Saturday’s “Lou Blaney Memorial” will be under the All Stars’ sanction, but first ever as part of Ohio Speedweek.  It took 10 years, but there was finally a repeat winner for the Sprint Car portion of the “Lou Blaney Memorial” in 2018, and it was none other than track owner, Dave Blaney.  Ironically, last season saw younger brother Dale Blaney capture his first event win to become the 10th different winner in 11 years!

Series owner, Tony Stewart, won the inaugural event in 2009.  Mike Lutz was the first local winner taking the 2010 version.  Texan Sam Hafertepe, Jr. won in 2011, while Californian Brad Sweet, who was the 2019 World of Outlaws champion, was victorious in 2012.  Jack Sodeman, Jr. became the second local driver to win the prestigious event in 2013, while Dave Blaney won his father’s memorial for the first time in 2014.  Sheldon Haudenschild, who is in his fourth season with the WoO, won the 2015 event.  Pittsburgh’s Danny Holtgraver won the biggest race of his career in 2016.  Christopher Bell, who has went on to NASCAR glory, won his first race at the track in 2017.

While rain washed out both scheduled All Star appearances in 2019 leading up to the “Lou Blaney Memorial”, the COVID-19 pandemic cancelled both scheduled appearances by the Series before the “Lou Blaney Memorial” in 2020.  Only one race has been completed during the 91st anniversary season at Sharon with Dave Blaney capturing his 32nd career “410” win at his home track on June 27, worth $3,000.

Justin Snyder’s “Salute to the Troops” event, which honors one of open wheel racing’s most loyal and dedicated supporters – the late Justin Snyder – as well as a benefit for the Wounded Warrior Project, will uproot from central Pennsylvania and move to Sharon for the first time on Sunday.  The event will conclude Ohio Speedweek, which offers an $11,000 point fund with $4,000 going to the champion.

Snyder was a retired Army combat veteran who did two tours in Afghanistan as a proud member of the US Army 10th Mountain Division.  Once retired, he moved to central Pa. before his passing on April 19, 2016. Remembered by those closest to him as a loyal friend and by anybody who met him, for his compassionate smile and wholehearted laugh.

The Wounded Warrior Project was founded by veterans and positions itself with veterans to support those in need including their families.  It provides help through independent, peer, and family support including combat stress recovery services to help those struggling both physically and/or emotionally as they strive to adjust and integrate back into civilian life.  As we salute Justin and the countless others who have struggled once separated from military life, let’s all consider what we could to assist those who have selflessly served our nation.

“After four successful years in central Pa. at BAPS Motor Speedway, we are extremely excited to bring Justin Snyder’s Salute to the Troops race back home to Sharon Speedway,” Derek Snyder explained, older brother of the late Justin Snyder and the Executive Manager & Partner of Sweeney Chevrolet Buick GMC. “My family’s passion for racing began at Sharon.  My earliest memories are my brother and I attending our father’s company picnic hosted at Sharon Speedway during the Sharon Nationals, then camping out with our aunts, uncles, and cousins in the parking lot.  Our father supported the track with pace cars and sponsorships clear back to the mid 80s. Snyder Pontiac Buick GMC Cadillac also sponsored Lou Blaney for several years.  So, having the privilege to host Justin’s race the same weekend as the Lou Blaney Memorial is an incredible honor.”

“It just seemed very fitting for me to keep this going by bringing the race to Sharon,” added Derek Snyder.  “This is something I believe my brother would be incredibly proud of.  I’m so grateful for our family’s relationship with Lou and Kate Blaney over the years.  I wanted to be certain that I had Kate’s blessing prior to even considering this move and date.  Thankfully, she obliged and here we are.  I want to thank Jared of the All Stars for the Series’ support, as well.  This race has really taken on a life of its own, especially when you look at the past winners including Danny Dietrich, Greg Hodnett, Tony Stewart, and Gerard McIntyre, Jr.  I encourage all of our friends and family, including our central Pa. racing family, to join us in keeping Justin’s memory alive as we honor our nation’s bravest!”

Lee Jenson of Dragon Slayer Industries created a beautiful trophy for Sunday’s All Star winner.  The fastest qualifier will receive $500 in memory of Richard Murcko, provided by his brother Reggie Murcko. Richard was a devout race fan who attended his first races with his brother and continued to do so for many years at Sharon.

After four events of Ohio Speedweek, Cap Henry won the Attica Raceway Park opener followed by Monday’s show at Wayne County, while Buddy Kofoid and Aaron Reutzel captured wins on Saturday and Sunday at Fremont Speedway.  Reutzel, the defending and two-time All Star Champion, leads both the Speedweek and Series points.  Reutzel also leads the Series with five victories.  After a night off on Tuesday, Speedweek is set to resume on Wednesday night at Brush Creek.

The Hovis Auto & Truck Supply Big-Block Modifieds make their first and only scheduled appearance of the 2020 season on Saturday night as they will round out the two-division show in a $2,000 to-win BRP Mod Tour event.  Thus far this season, BRP has completed three events with Garrett Krummert winning the first ever event at Bedford, while last weekend saw New York’s Erick Rudolph sweep the Lernerville-Tyler County shows, worth $5,000.

There have been nine different winners in 11 “Lou Blaney Memorial” Modified events.  New York legend Jack Johnson captured the inaugural 2009 race, while local Ohio drivers Jim Rasey and Rob Kristyak stole the thunder in 2010 and 2011.  Kevin Bolland won the prestigious event in 2012 and fellow western Pa. racer Dave Murdick joined him in 2013.  In 2014, Rex King, Jr. won the event part of his dream season, while in 2015 Jim Weller, Jr. added his name to the win list.  Rasey became the first repeat winner in 2016.  Jeremiah Shingledecker got his first event win in 2017, while New York’s Mike Maresca ended the locals’ run of eight straight event wins thanks to his victory in 2019.  Five years after his first win, King, Jr. added his second event win last season.

The third year RUSH Sprint Cars will complete Sunday’s program in a $600 to-win event.  The non-wing division was part of the June 27 program as Jeremy Weaver captured his first RUSH Sprint win at the track; Weaver is a former RUSH Sportsman Modified winner at Sharon.  Due to the COVID-19 pandemic, the RUSH Sprint Cars have only raced one other show in the region with Zach Morrow winning at Pittsburgh.  Chad Ruhlman is the defending two-time $5,000 Weekly Series Champion, but is not competing in 2020 to focus on his son Kevin’s RUSH Sprint efforts.

The pits will be open throughout the afternoon each day with pit passes and general admission ticket sales opening at 3 p.m.  The All Star drivers meeting is scheduled for 5 p.m. followed by Sprint engine starts, warm-ups at 6 with qualifying and racing to follow.

Adult admission is $25 each day.  On Sunday, veterans of war receive a $10 discount off general admission.  Advanced and reserved tickets are on sale by visiting https://sharonspeedway.simpletix.com/.  Pit passes are $35.  Children under 14, parking, and camping are FREE!  Sharon has a no carry-in cooler policy.