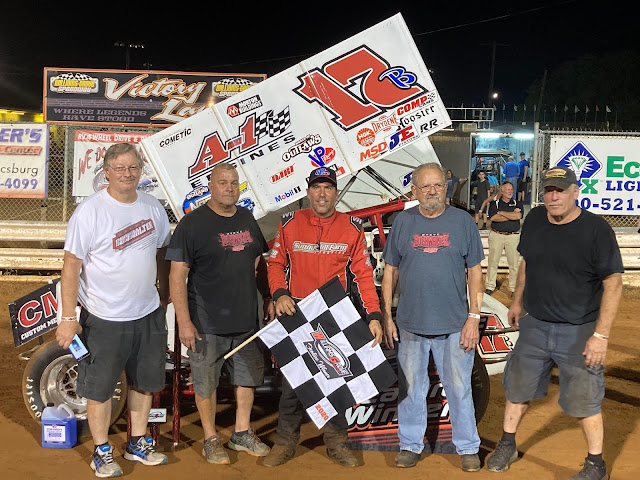 Mechanicsburg – Steve Buckwalter of Royersford wired the field for the 410 sprint car victory at Williams Grove Speedway on Friday night, outrunning Matt Campbell to the checkers for his 11th career speedway win.

The victory tied him on the oval all-time win list with Randy Wolfe.

In the 25-lap URC Sprint feature event, Anthony Macri of Dillsburg took a convincing victory after wrestling with Josh Weller for the lead.

The leaders entered the rear of the field on the eighth lap but even in traffic, as long as a lane was open, Buckwalter was good to go as he navigated the field perfectly.

But when both lanes ahead were blocked by cars racing for position with nine laps to go, Reinhardt was able to drive right up on the leader and make his move.

However his move failed when an attempted pass on the bottom in the first and second turns virtually stalled his movement on the 17th tour and instead Buckwalter got away on the backchute.

That near stall allowed the third place car of Matt Campbell to blast around for the second spot but then Campbell soon lost ground when he nearly looped his mount on the second turn cushion a lap later.

All of this put Buckwalter within four laps of the win but again heavy traffic entered the picture just in front of the leader and during the last two laps, Cambpell was able to close dramatically in order to make a final turn move for the win.

The Fawn Grove driver swept across the bottom of turns three and four and nearly came up with the win but instead fell in line nose to tail with the winner as the pair crossed the finish line.

Buckwalter’s margin of victory was .223 seconds.

Reinhardt was third followed by Ryan Smith and Brent Marks.

Justin Barger tried to take control from the pole at the start of the URC Sprint main but third starter Josh Weller had other ideas.

He passed both front row cars including Anthony Macri in the first and second turns when the green flag appeared.

Macri was running in second when the caution flag appeared on the sixth lap.

Macri took the lead from Weller on the restart before another yellow flag slowed the pace a lap later.

Weller served notice he wasn’t so easily set back when action resumed by driving back into control in the third turn only to see Macri return the favor.

Then Weller again retook command moments later in the first turn only again to watch as Macri reclaimed the point.

And this time Macri would not relinquish the top spot, instead driving away to the win by 3.577 seconds.

Weller got another chance on a lap-12 restart but Macri was up to the task for the win.

In fact, he took no prisoners on his way to his first ever sprint car win at the track, threading the needle for a three-wide move going into the first turn with two laps to go as he split a pair of backmarkers.

Fourth starter Steve Buckwalter motored into second with eight laps to go but couldn’t close on the leader.

Weller was third followed by Tyler Ross and 19th starter Jason Shultz who put on a smooth drive to the front.