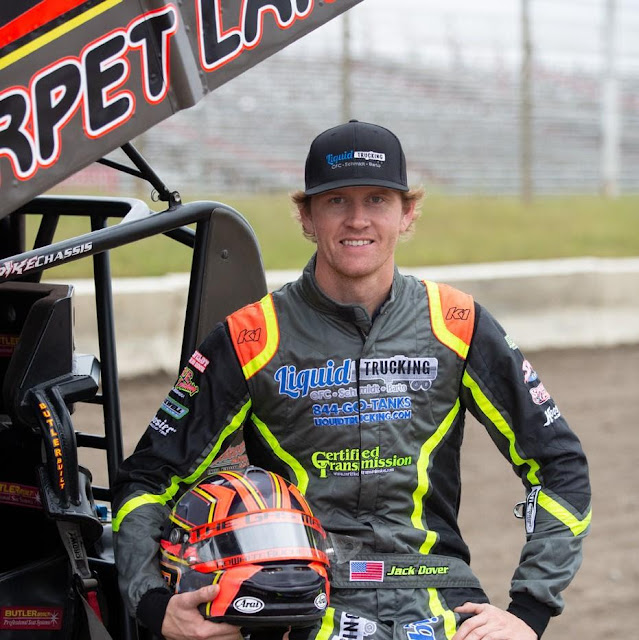 Inside Line Promotions - HARLAN, Iowa (July 1, 2020) - Mechanical woes kept Jack Dover from likely winning a pair of Carpet Land Nebraska 360 Sprints races last weekend.
Dover was leading two features when he was stymied by the trouble, which dropped him to a runner-up result on Friday at I-80 Speedway in Greenwood, Neb., and a 10th-place outing on Saturday at Shelby County Speedway.
"This is literally the only time I've had any mechanical problems in the two or three years we've been with Speedway Racing Engines," he said. "I want to say thank you to Zach Woods and the team at Speedway for working hard to get everything repaired and back to me quickly. They do a phenomenal job."
Last weekend began on Friday with Dover winning a heat race from the pole at I-80 Speedway. He then redrew the No. 2 to start the feature on the outside of the front row.
"We had a good weekend of drawing good numbers so that made it easier," he said. "The track was pretty heavy and locked down in the heat race. I knew it would be important to get a good start and take the lead.
"The track was good come feature-time. I was running above the cushion where everybody else was entering in the middle. With 12 laps to go my motor started missing in the corners and wasn't running correctly. Lee Grosz got me in turns three and four coming to the white flag."
Dover's second-place finish marked his ninth straight top five to start the season.
"We checked it and put new spark plugs in before the race on Saturday at Shelby County Speedway," he said. "We started third in the heat race and we got to second right away. About three laps in were able to get around Lee around the top to take the lead. On the last lap of the heat the motor started doing the same thing as the night before where it was missing in the corners."
Dover won the heat race - his sixth straight event with a heat win - before drawing the No. 3 for the main event lineup.
"We switched the fuel pump, mag, mag box, everything we could," he said. "We got up to the lead right away and had a big distance on them in three laps. Then we broke a rocker arm and that ended our night early."
Dover was credited with a 10th-place outing, which gives him a top 10 in every race this year.
He plans on heading to Knoxville Raceway in Knoxville, Iowa, to race this Friday and Saturday.
QUICK RESULTS -
June 26 - I-80 Speedway in Greenwood, Neb. - Heat race: 1 (1); Feature: 2 (2).
June 27 - Saturday at Shelby County Speedway in Harlan, Iowa - Heat race: 1 (3); Feature: 10 (3).
SEASON STATS -
10 races, 4 wins, 9 top fives, 10 top 10s, 10 top 15s, 10 top 20s
UP NEXT -
Friday and Saturday at Knoxville Raceway in Knoxville, Iowa
MEDIA LINKS -
Website: http://www.JackDoverRacing.com
Twitter: https://twitter.com/JackDoverRacing
Facebook: https://www.facebook.com/jackdoverracing?fref=ts
SPONSOR SPOTLIGHT - SSS Motorsports
As a life-long supporter of dirt track racing Luke Jay Cochran built the SSS Motorsports team to a leader in all aspects of the dirt track world. While sponsoring and mentoring drivers and teams in the area, Cochran built a team established on winning with multiple national titles, track championships and series championships.
"Luke Cochran has been a great family friend the last few years and he's been instrumental in keeping our program going," Dover said.
Dover would also like to thank Liquid Trucking, Carpet Land, Certified Transmission, Backlund Plumbing, True Trucking, Thorpe's Body Shop, Speedway Graphics, Speedway Engines, Volvo Trucks of Omaha, Husker Diesel, Spike Chassis, Sway Away, ButlerBuilt Professional Seat Systems, Keizer Aluminum Wheels, Schoenfeld Headers, Langfeldt Overhead Doors, K&N Filters, FK Rod Ends, DMI, Vortex Wings, Speedway Motors, Ostransky Farms, R&G Services and Industrial Plating for their continued support.
Posted by Bill McIntyre at Thursday, July 02, 2020