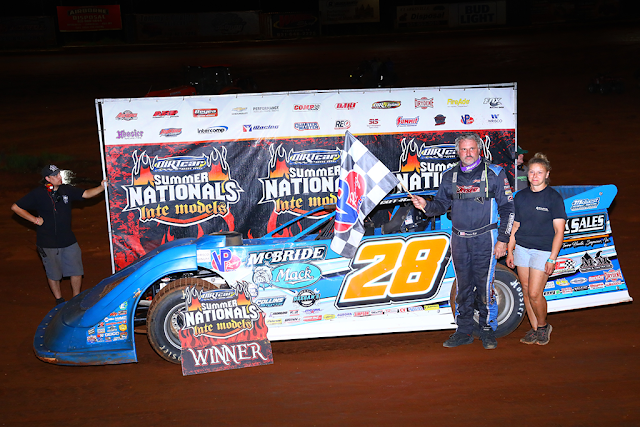 CLARKSVILLE, TN – July 26, 2020 – There were few drivers in the DIRTcar Late Model field Sunday night that have had more success at Clarksville Speedway than Dennis Erb Jr., and he showed exactly why with a flag-to-flag victory over the 28-car field for the 23rd time in his DIRTcar Summer Nationals career.

From the pole, Erb shot to the lead at the drop of the green and immediately went on the defense, holding off challenges from Frank Heckenast Jr. in the early going. Heckenast gave him a strong run to the outside and almost got around the #28, but Erb found some more speed on the bottom and closed the window of opportunity before the first of many caution flags flew on Lap 12.

Heckenast and his #99jr Rocket Chassis weren’t done, however. He hounded Erb for the lead over the next 13 laps until Billy Moyer got around him on a restart. Heckenast soon faded back to fourth while points leader Brian Shirley took advantage of the open door and made his bid for the front.

Shirley brought his A-game for the 40-lap contest in an effort to defend his victory from the night prior and made a great effort, putting a swift move on both Moyer and Heckenast in the same corner to take second as they crossed the line to complete Lap 30.

Back out front, it was Erb’s race to lose. With Shirley now less than one second back with less than 10 laps to go, Erb dropped the hammer. He found a sixth gear down on the bottom and slowly began to pull away from Shirley again, leading the field back around to the checkers and a $5,000 payday.

“It was pretty much typical Clarksville here tonight,” Erb said in Victory Lane. “I just kept it smooth around the bottom and was able to keep it out front.”

Erb rarely shows much emotion, even after beating competition like he did on Sunday, but the three-time Tuckasee Toilet Bowl Classic winner is one veteran that cherishes every victory at Clarksville no matter how he got it.

“It feels good. We’re getting this Rocket Chassis figured out. We made a few changes tonight that I think are really going to help on some smaller tracks, and we’re looking forward to keeping it going,” Erb said.

The DIRTcar Summer Nationals Late Models are off on Monday and Tuesday before a return to action in Round #16 Wednesday night at LaSalle Speedway in LaSalle, IL. Catch all the action live on DIRTVision with a Fast Pass subscription!

Originally, the two-day venture out to the Volunteer State for some DIRTcar Summit Racing Equipment Modified Nationals action wasn’t even on defending champion Nick Hoffman’s projected schedule. After all, only a driver’s best eight finishes count toward the overall points standings.

But it’s the drive to win and passion for competition that makes a champion a champion, and Hoffman showed exactly what that looks like Sunday night, as he completed the weekend sweep of the Modified action with his second win in two days at Clarksville Speedway.

“We weren’t really planning on coming here as of last week, so to come here and win both nights is pretty good,” Hoffman said in Victory Lane. “It says a lot about the guys that help me and put this thing together for me. We’ve been working out tails off to get this thing right and I think we’re really close right now.”

50 Feature laps were contested over the two days in Tennessee, 50 laps led for the Mooresville, NC-native. He’s now tied with fellow championship contender Mike McKinney for most wins overall this season at three, and it’s shaping up to be a dogfight for the points championship.

In what was almost a mirror image of Saturday night, Hoffman jumped out to the early lead and went 25 laps virtually unchallenged for the lead by the rest of the top-five, which included names like Trent Young, Josh Harris, McKinney and Will Krup.

In the laps before the final caution late in the race, Hoffman had drawn-up a lead of almost two seconds around the quarter-mile. Using the middle of the track as his preferred lane, Hoffman and his Elite Chassis seemed to just float around the red clay high banks where others just chased.

“It felt better out there than it did on the bottom, and I didn’t know where them guys were running. I would just open up my [corner] entry and kinda make it hard for someone to pass me if they had a run,” Hoffman said.

After suffering his second DNF of the season early in Saturday night’s Feature, McKinney was able to rebound Sunday night with a fourth-place finish behind Trent Young and Josh Harris. Harris, who made the trip down for Sunday only, tied his best finish of the year with the Summit Modifieds in third.

The DIRTcar Summit Racing Equipment Modified Nationals are off on Monday and Tuesday before a return to action in Round #14 Wednesday night at LaSalle Speedway in LaSalle, IL. Catch all the action live on DIRTVision with a Fast Pass subscription!