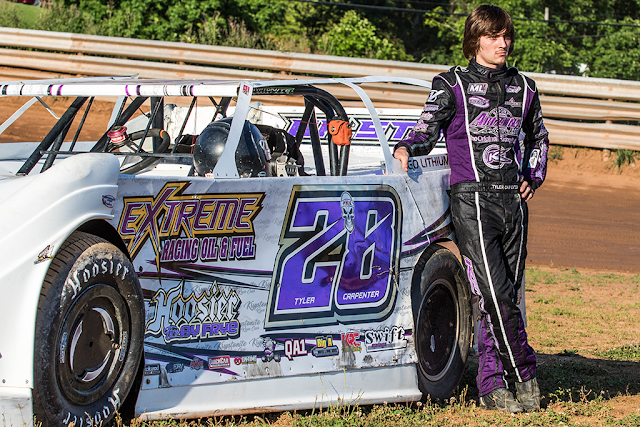 Tyler Carpenter, the 2019 Gateway Dirt Nationals champion, announced Thursday afternoon his plans to follow the DIRTcar Summer Nationals Late Model circuit – much to the delight of his sizable fanbase. They’ll watch him wheel it around Indiana’s Brownstown Speedway in the tour opener Wednesday night, July 8, LIVE on DIRTVision presented by Drydene.

With his memorable back-to-back victories at Gateway just under seven months ago, including the $30,000 finale, Carpenter showed the racing world what those closest to him already knew with his raw post-race interviews, likeable persona and remarkable talent behind the wheel – he’s got a bright future ahead.

Now, he’s taking the next step in his journey to Dirt Late Model racing’s upper echelon. And he says he knew almost instantly that the Summer Nationals was next on his radar.

“To be honest, it was right after we won Gateway.”

Throughout the 2010s, Carpenter competed on the small, often banked, bullring-style courses like the familiar Tyler County Speedway that helped him cut his teeth and shape him into the wheelman he is today. The momentum he’s carried since Gateway has served him well, even after the pandemic shutdown, with three trips to Victory Lane already this year – most recently at Oakshade Raceway, where the Summer Nationals lands on Aug. 22.

Most of the tracks the Summer Nationals visits are configured just to Carpenter’s liking – short, fast and banked. He’ll look to use that to his advantage as he attempts the entire tour for the very first time.

“I know it’s places like them little bullrings out there,” Carpenter said. “You’re not just racing half-mile tracks where you have to have a lot of technology and you have to have engineers. It just equals it out, and I feel like I’m on top of my game at these smaller tracks. I think I’m just as good as anybody on them.”

The family business will also play right into his hands as he sets out for 26 nights of racing in 46 days. Tyler and father Freddie own and operate Kryptonite Race Cars from within their shop in Parkersburg, WV – a chassis brand also driven by Allen Weisser of Peoria, IL, who makes appearances on the tour every year. The Kryptonite brand might not currently have the numbers like Rocket and Longhorn, but it won Carpenter a total of $37,000 in two nights on the tiny makeshift dirt track inside The Dome at America’s Center.

“It’s crazy to think about when we originally started, to where we’re at now. We never claim to be the best, we just want to be amongst them. Just be mentioned with them, and hear our names be talked about. We’re slowly getting there,” Carpenter said.

Looking back on his days as a former Sport Compact racer, Carpenter still echoes the storyline he reflected so hardly on in Gateway Victory Lane. He’s a small-town, blue-collar racer from the Saturday night short tracks of West Virginia on a mission to prove he can hang with the big dogs. He’s impressed even himself of how far his driving skills and the chassis business have come over the past decade, and now he’ll gather up all he’s learned to tackle the biggest venture he’s ever started in his young career.

“It’s taken years to get to where we’re at now,” Carpenter said. “We started out struggling… and we’re still not top-of-the-line, but we’ve pretty well mastered some of the tracks and the bullring stuff.

“I feel like we’re progressing a lot faster now. We’re understanding things a lot more, and we’re hoping to have more to offer our customers.”

In just three days, the Kamikaze Kid will park among the big rigs of tour champions Brian Shirley, Bobby Pierce and Shannon Babb and add another chapter to his ever-expanding underdog story. But this time, he’ll be chasing a new height of success his family of six can all look up to for years to come.

“I’m going to try and hit the first leg of this thing,” Carpenter said. “If we’re being pretty competitive, consistently top-10 at least, nothing too crazy, I’m going to keep digging.