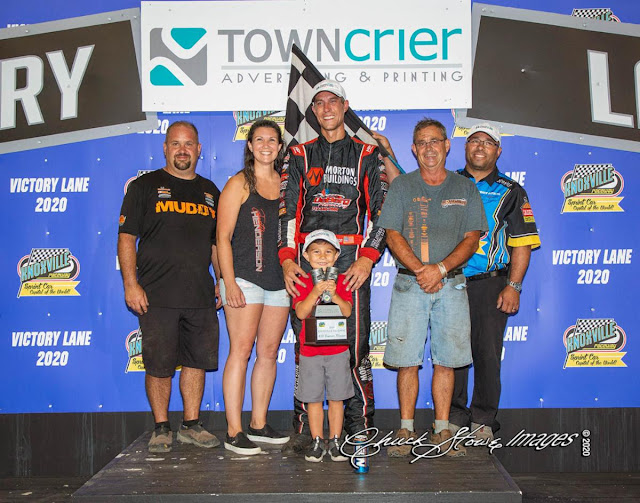 Inside Line Promotions - KNOXVILLE, Iowa (July 7, 2020) - Justin Henderson had a premonition last Saturday as 'God Bless America' played through the loudspeakers at Knoxville Raceway during our nation's holiday. He pictured himself taking the checkered flag and making the right turn into Victory Lane.

Then, just before the feature, he was walking back to his car when he spotted something shiny in the Iowa dirt that was calling out to him. He went over and picked up the item - a heads up quarter. He decided to tape it to the back of his seat for good luck.


With a storybook ending in his mind and a good luck charm along for the ride, Henderson's feeling turned to reality as he wheeled the Mike Sandvig Racing sprint car into the Winner's Circle to cap off a weekend doubleheader at the famed half-mile oval.

The win was worth $4,000 and backed up a solid ninth-place finish during Friday night's opener. It also served as the first 410 sprint car win for Sandvig as a car owner.

"Call me crazy, but from the very beginning of the night I just had this feeling that it was going to be something special and just couldn't shake that feeling," Henderson said. "Right before we went out, Mike asked me what I thought and I told him we were going to win that race. It was like we were supposed to win."

The successful weekend began Friday night with Henderson laying down a fastest lap of 16.368 seconds in time trials, which was good enough for eighth quickest among the 29 cars in attendance. He then finished fifth in a heat race.

Henderson lined up from the 12th starting position in the feature and ran comfortably around 10th before finishing in the ninth position. The top-10 result was the fifth of the season for the Tea, S.D., native.

"I tried the top of the track and I didn't like the way the car felt so I moved to the bottom as it was really where we had to be," he said. "I wasn't bad, but really the only thing I could do was wait for someone to make a mistake and capitalize."

The team made a few minor adjustments to the car for Saturday's finale, which started off with Henderson timing in at 16.714 seconds. That was seventh quickest and he followed with a fifth-place run in a heat race.

The feature inversion put Henderson on the pole for the main event. He quickly raced out to a sizeable lead and was working his way through lap traffic by Lap 7. With four laps to go, Austin McCarl pulled alongside of him in a bid to take the lead, but the red flag flew just in time to negate the effort.

Using the bottom of the race track, Henderson took off on the restart and he briefly lost the lead with two laps to go, only to cross back under McCarl heading to the white flag. Fighting a wing cylinder issue, Henderson moved to the top of the track to protect the lead and it almost cost him as Brian Brown made a last-turn effort to overtake him on the bottom. The two cars drag raced out of turn four and Henderson took the checkered flag by less than seven tenths of a second to earn the win for the first time at the track since 2015.

"I didn't know what it was, but I could feel there was something wrong and I just tried to hold on that last lap," he said. "I was doing my best to just stay off the wall and hold off Austin and Brian came out of nowhere to give me a fight. I honestly don't know how we held on other then it was just meant to be."

While the win broke a five-year drought at the track for Henderson, he was more happy for Sandvig and to be able to celebrate with his son in Victory Lane.

"Mike and his guys have worked so hard to make this deal happen and I honestly think I'm happier for him then myself," he said. "And then to get to take my son up on the wing and to do it on the Fourth of July, it's like all the stars aligned. Hopefully it's the first of many more wins for us together."

Henderson will return to Knoxville Raceway this Saturday for another regular weekly show. He enters the race ranked seventh in season standings - only 67 points out of second.

"We've had a relationship with Morton Buildings for more than four years and they've really grown in the racing scene," Sandvig said. "We're thrilled to have such a reputable sponsor as part of our team."