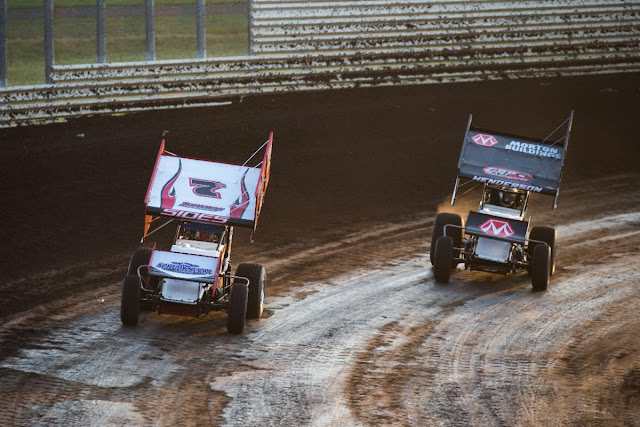 The team qualified for the feature during each of the three nights, highlighting the event with a seventh-place result during the opening preliminary race.


"There were guys who definitely had a worse weekend than us, but it wasn't really where we wanted to be," Henderson said. "We made all three features, so it says we can definitely compete with the best and we'll keep digging."

Thursday night's opener began with Henderson laying down a lap of 13.154 seconds in time trials, good enough for 17th quickest among the 44 competitors. He then started second in a heat race and finished third to lock himself into the feature with a ninth-place starting spot.

Persistent rain showers delayed the feature event until Friday evening. Henderson returned to the track and advanced forward two spots to place seventh. The top-10 finish was the third of the season for the team.

"We were pretty good early on and I thought we maybe had a top-five car," Henderson said. "To finish seventh against a field like that is pretty cool, but ultimately we want to be challenging for wins and not just top 10s."

Henderson and his team decided not to make any changes to the car for the regularly scheduled program Friday night. He timed in 13th quickest with a lap of 13.277 second, but he got over the berm during the start in his heat race. That dropped him to a sixth-place finish and a spot in the Last Chance Showdown. Henderson gained one one position to finish second, which qualified him for the feature.

Henderson capped the night by ending 22nd in the A Main.

"I really hurt us in that heat race by jumping the marbles up top and it set the tone for the entire night," he said. "We fought back to make the show, which says a lot about our team's strength, but ultimately it was just a disappointing night."

Henderson ranked 16th in preliminary points and a third-place finish in a qualifier on Saturday locked him into the 16th starting position for the 35-lap main event. He struggled in traffic and ultimately lost one spot to finish in 17th.

"We had a really fun race with Jason Sides in the qualifier and I actually thought we were pretty good," he said. "But once the feature rolled around it just seemed like we didn't really have anything for them and we just kind of raced around where we started."

Next up for the team is a return to Knoxville Raceway in Knoxville, Iowa, this Friday and Saturday.

"I'm really looking forward to getting back to Knoxville and I'm hopeful that we can be sitting up front at the end of the night," Henderson said. "Mike gives me great equipment and I really want to get him a win. The story of our season has been that we are good, but not spectacular. We want to be spectacular and I think we're on our way to getting there."

Friday and Saturday at Knoxville Raceway in Knoxville, Iowa

"DeBerg Concrete has been a long-time sponsor of mine and I believe they are the best in concrete finish from driveways to light foam basements," Sandvig said. "They do it all. Contact Kevin at (712) 330-3676."