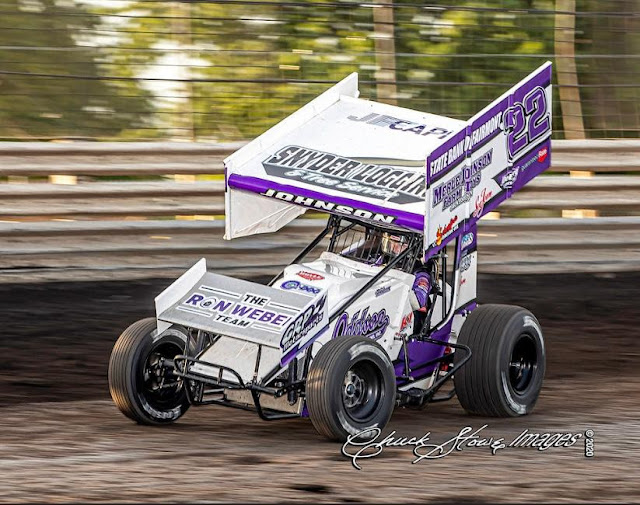 Inside Line Promotions - KNOXVILLE, Iowa (July 27, 2020) - Kaleb Johnson displayed plenty of speed during a pair of races in Iowa last week.
Johnson made his first visit of the year to Rapid Speedway in Rock Rapids on Tuesday for a Midwest Sprint Touring Series event. He started on the pole of his heat race and pulled away for the win.
"I knew I had to win the race to get a decent starting spot in the feature," he said. "I was able to take the lead early and wasn't challenged."
The heat race victory placed him in the computerized feature redraw and he started sixth in the night's main event.
"I rode around in fifth or sixth for a while, then the track started laying rubber around the top of turns one and two," he said. "We were in lapped traffic with about eight or nine laps to go and I tried putting a slider on the fourth-place car. There was a lapped car on the bottom. I drove it a little too hard and had to get out of it a bit. I hit the rubber and it sent me off the track. I lost about four spots and ended up finishing ninth.
"It wasn't too bad considering what happened. There were some good cars there and it was good to know that we were able to compete with most of them."
Johnson ventured to Knoxville Raceway on Saturday. He's enjoying a solid season at the half-mile oval thus far, entering Saturday night ranked fifth in points with a sizable lead in the Rookie of the Year race.
"With 360 Knoxville Nationals coming up in a couple of weeks we wanted to try something different with the car in time trials and find out if it worked," said Johnson, who timed in 16th quickest out of 23 cars in his group. "Unfortunately, it didn't really work out. That was disappointing, but at least we found out it didn't work now rather than when there's more on the line. We missed the heat race invert and that put us in a hole for the rest of the night."
Johnson battled to advance from eighth to sixth in his race and then from 11th to fifth in the B Main, finishing one spot short of transferring to the A Main. It marked the first time he failed to qualify for the main event at the track this year.
"We moved forward in both races and I feel that we could've made the transfer spot in the B Main if we had another lap or two," he said. "Ten laps go by pretty fast. Not that it matters a lot, but we turned the fastest lap other than the leader in both our heat and the B Main. So probably the most encouraging thing we learned at Knoxville was that we can be fast in dirty air."
Johnson will return to Knoxville Raceway this Saturday.
QUICK RESULTS -
July 21 - Rapid Speedway in Rock Rapids, Iowa - Heat race: 1 (1); Feature: 9 (6).
July 25 - Knoxville Raceway in Knoxville, Iowa - Qualifying: 16; Heat race: 6 (8); B Main: 5 (11).
SEASON STATS -
11 races, 0 wins, 2 top fives, 5 top 10s, 7 top 15s, 9 top 20s
UP NEXT -
Saturday at Knoxville Raceway in Knoxville, Iowa
MEDIA LINKS -
Website: http://www.kalebjohnsonracing.com/
Twitter: https://twitter.com/Kaleb___Johnson
Facebook: https://www.facebook.com/KalebJohnsonRacing22
SPONSOR SPOTLIGHT - The Ron Weber Team
The Ron Weber Team at Hegg Realtors in Sioux Falls, S.D., offers the most competitive tools and resources for buying and selling homes in the market. Their realtors are dedicated to providing the service needed to make the process as quick and easy as they believe it should be. Their robust search tools are at the customer's disposal to find the perfect home and their agents are ready and eager to help. They promise that the perfect home is just a click away on their website. For more information, visit https://theronweberteam.hegg.com/ .
"Ron Weber started sponsoring me when I began racing sprint cars when I was 16-years-old," Johnson said. "I've gotten to know him pretty well over that time and I greatly appreciate his support over the years."
Johnson would also like to thank Merle Johnson Farm Toys, GRP Motorsports, Oddson Underground, JF Capital, Snyder Tree Service, State Bank of Fairmont, Sea Foam, Schaeffer's Oil, Hepfner Racing Products, DeBerg Concrete, Big Al's Diecasts, DeBerg Flooring, Dave's Lawncare, Guaranteed Rate - Mike Brudigan Home Loans, Triple M Trucking, Last Deck and Marthaler Dodge for their continued support.
INSIDE LINE PROMOTIONS -
Inside Line Promotions specializes in affordable public relations and media management for motor sports drivers, teams, sponsors, tracks, series, events, organizations and manufacturers. ILP Founder Shawn Miller leverages professional journalism with new media technologies and social networking to improve your exposure and the return on investment for your sponsors.
To meet the media relations needs of your program by joining Team ILP, contact Shawn at 541-510-3663 or Shawn@InsideLinePromotions.com . For more information on Inside Line Promotions, visit http://www.InsideLinePromotions.com.
*PHOTO BY CHUCK STOWE IMAGES*
Posted by Bill McIntyre at Monday, July 27, 2020