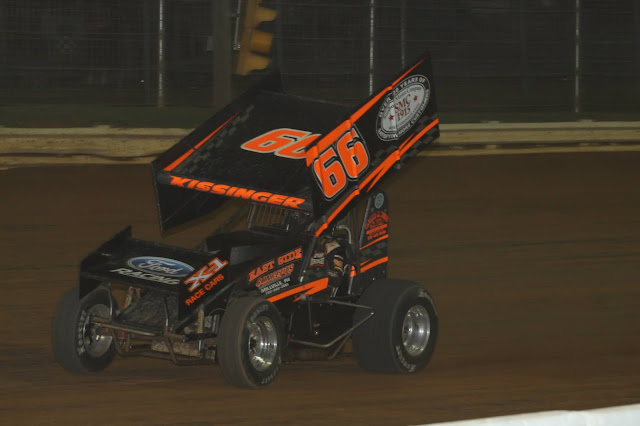 By Shawn Brouse
Selinsgrove, Pa. – Ryan Kissinger of Bloomsburg scored the biggest win of his sprint car career at Selinsgrove Speedway on Saturday night, walking off with the 20th annual, 30-lap National Open for 360 sprint cars worth $5,000.

The racing program was delayed several hours by intermittent rains that hit the track just prior to starting time but after the surface was worked back into shape, the beautiful smooth track produced soaring speeds for the sprint cars and late models.

Johnathan Preston of Romulus, New York grabbed the early lead in the 360 Open followed by third starter Kissinger aboard his No. 66.

Preston had Kissinger challenging from the start as the pair raced by the flagstand lap after lap nose to tail for control.

Kissinger made good time on the high side in the third and fourth turns and nearly snagged the lead first on the third circuit before falling back in line only to complete the pass a lap later.

Preston then charged back to Kissinger’s outside as the pair throttled into the first corner on lap five but Kissinger was able to bite fast on the bottom exiting the corner to remain in command.

Preston tried again in the same set of turns the next time around to regain control but again Kissinger was up to the task and he entered the rear of the field with 10 laps in the books.

The only caution flag of the event unfurled on the 12th lap, placing Preston, Davie Franek, Adam Carberry and Mark Smith in line for the restart.

Preston was unable to challenge on the restart and by lap 21, Kissinger was again working the rear of the field.

The leader then nearly gave the race away in traffic with five laps to go when contact with a lapped car low in the middle of the first and second turns found him turn the car sideways and nearly spin.

Luckily, his advantage over the field at that point was large enough so that he was able to right his sprinter and maintain control.

Preston however was able to close somewhat on Kissinger during the final two laps, crossing the line less than a half straightaway behind, a margin of .908 seconds.

The win was Kissinger’s sixth at the Snyder County speedplant.

Ken Duke Jr. would lead all 20 laps of the 305 sprint main as second and third spots changed several times during the event.

Doug Dodson took second from Derek Hauck on the eighth tour but not before Hauck raced in Duke’s shadow for the lead the first four laps.

Garrett Bard motored into third, around Hauck with eight laps to go but then had Devin Adams take over the spot with five laps to go.

Meanwhile, Duke cruised out in front to the victory by 2.512 seconds.

It was his third career win at his hometown track.

Jared Fulkroad won the limited late model main to score his second career win at the track by leading all 15 laps over Todd Snook.

Heats went to Fulkroad and Snook.