Mallett Holds on for Top-15 Finish at Riverside International Speedway 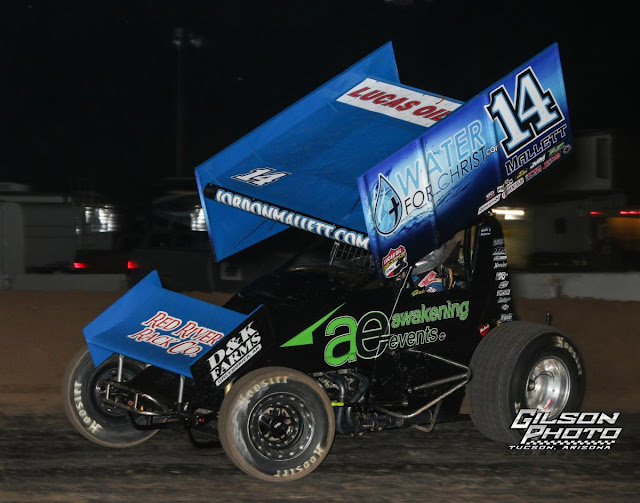 The top-15 outing was the 13th of the season for the Greenbrier, Ark., native and it marked the first time he has been off the podium in more than a month.


"You're going to have nights like that, but it's frustrating to have it at a track I'm traditionally good at," he said. "The track did the direct opposite of what we expected and it was just one of those nights where you're left scratching your head trying to figure out where you went wrong."

Mallett advanced one position to finish third in a heat race, which secured the 13th starting position in the feature.

At the drop of the green flag, Mallett felt comfortable and was moving forward throughout the field. However, after a handful of laps he lost the handling on his car and faded to 14th at the checkered flag.

"Once the track gets slick, it just keeps getting slicker and the car was a complete handful to drive," he said. "I took a big swing at things in terms of the setup and I just misjudged big time on what the track was going to do. I would've liked to at least get a top 10, but with how far off we were a top 15 seems like a win."

Next up for Mallett will be a trip to U.S. 36 Raceway in Osborn, Mo., this Friday with the Lucas Oil ASCS National Tour. He enters the night fourth in the championship standings, trailing third by seven points and the leader by 95 points.

"I try not to get too hung up on the points deal as I feel like we expect to contend every night and if we do that we'll have a shot at it at the end of the year," he said. "However, I think it's more about what you can salvage on the nights you are not so great more than the nights where you're on top of things that will make your season a success. There can only be one winner every night and most often it's not going to be you. So it is about doing the best you can no matter what the track or car gives you and moving on to the next race.

"We went to U.S. 36 Raceway once last year and I feel like we have our cars where we want them to be. We're going to head in there and try to put Riverside in the rearview mirror."

DHR Suspension has quickly become one of the leaders in the shock industry. Although the company was established in 2015, founder Derek Hagar has been servicing shocks for approximately a decade. DHR Suspension has teams across the country and competing with various sprint car series, including the World of Outlaws Craftsman Sprint Car Series, Lucas Oil ASCS National Tour and USCS Series to name a few. But the shocks services don't stop there. DHR Suspension also offers service for late models, modifieds, stock cars and mini sprints. For more information, visit http://www.DHRSuspension.com.

"I've been working with Derek since before he started DHR Suspension," Mallett said. "I can't say enough about how great of a service he has. He helps keep us consistent and I know I don't have to worry about that aspect of the car."