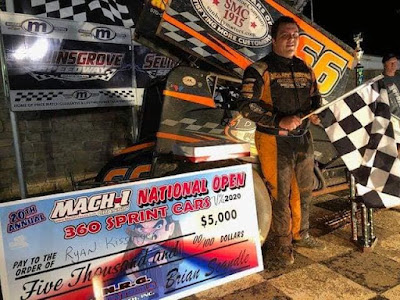 The United Racing Club win was worth $5,000 and was the biggest triumph of Kissinger's career. He has been a client of X-1 Race Cars for several years and credits Linder's attention to detail as a fabricator as a key detail to their success.


"Ryan helps me out a lot and if not for him we don't have refreshed equipment that is capable of contending for wins like this," Kissinger said. "His craftsmanship is top notch and the cars are always competitive, and I'm proud to win this race representing X-1 Race Cars."

Racing activities were delayed by several hours as intermittent rain hit the track just prior to the night's starting time. On a track that is well known for its speed, the rain only further added to that reputation and Kissinger showed speed early in the night as he was second quickest in hot laps.

He won a heat race from the fifth starting position. Based on passing points earned, Kissinger started from the third position in the 30-lap feature event.

"I had confidence after the heat race as I feel my engine program is top notch, especially when the track is tacky and wet," he said. "I wouldn't say I thought we would win, but I knew we had a chance."

Using the high side of the track, Kissinger moved into the second position on the opening circuit and he quickly put pressure on the leader. He moved into the lead on Lap 4 and held off multiple attempts for the top spot over the next handful of laps as he closed on traffic.

A caution on Lap 12 put the field back on his bumper, but Kissinger raced out to a lengthy lead without challenge. With five laps to go, he nearly gave away the win when he made contact with a lapped car and almost spun out. But with a large advantage at his expense, Kissinger was able to right the car and he crossed the finish line first for the victory by a margin of .906 seconds.

"I knew after that restart when I didn't really hear anyone behind us that we were in good shape," he said. "I thought I threw it away there hitting that lapped car, but we had such a big lead that luckily we were able to correct ourselves and end up in Victory Lane."

As a low budget race team with few sponsors, Kissinger helps Linder throughout the week to obtain new equipment. Seeing firsthand how hard Linder works and knowing the pride and dedication he puts into every X-1 Race Car made the win even more special.

"I help out Ryan a lot and I don't think you'll find a guy who is more passionate about the equipment he provides and his attention to detail is next to none," Kissinger said. "Business has been slow this year due to the virus and a lack of racing, so it's a special feeling knowing his hard work is paying off. I know this win means as much to him as it does to me."

X-1 Race Cars is a custom sprint car chassis business that was established in 2010 by sprint car racer and master fabricator Ryan Linder. The company relocated in 2017 to the Northeast to better serve a hotbed of sprint car racing in Central Pennsylvania and New York.