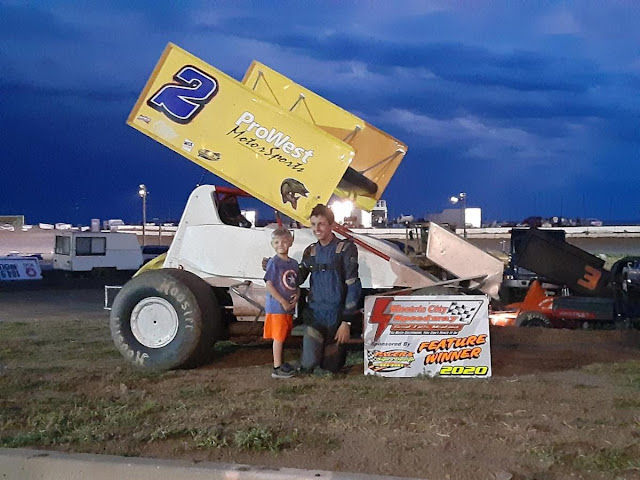 Inside Line Promotions - BILLINGS, Mont. (July 28, 2020) - James Setters added another victory to his total and he passed the most cars during his season debut in 360ci winged sprint car competition last weekend.


The weekend began on Friday with Setters advancing from fifth to third place at Electric City Speedway. That lined him up on the outside of the third row for the 20-lap A Main.

"I passed a couple of people in the first turn and then stayed in third for most of the race," he said. "I had a really good battle with Shane Moore and my teammate Rich Bailey. I think I got Shane on Lap 10 and then Rich on Lap 15."

Setters led the remaining handful of laps to extend his winning streak to seven in a row during series competition dating back to last year.

"It's nice because every time I win they look at it and say let's go beat this kid," he said. "Kory Wermling came up to race and put up a good fight a couple weeks ago. Rich Bailey almost beat me Friday, but his car had a problem."

"We had a little bit of problems in the heat race and didn't finish," he said. "Instead of a B Main they ran a six-car dash, which we won."

Setters advanced from fifth to win the dash. He then maneuvered through the field to place 12th in the A Main.

"It was a good night," he said. "The Slade shocks worked really well. I love Tony Borello's racing engines. That thing ripped."