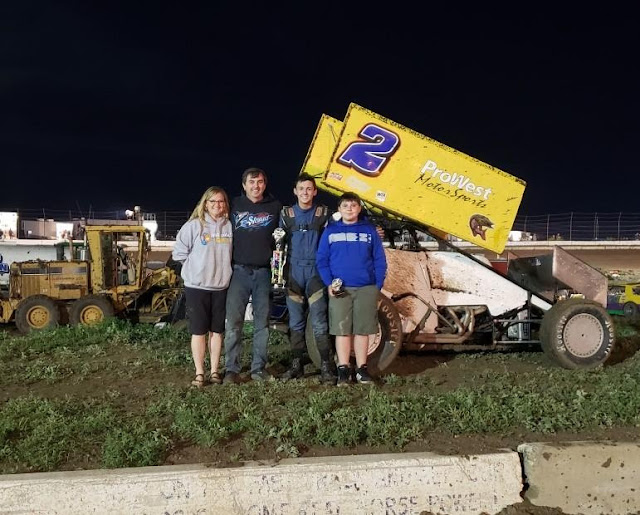 Inside Line Promotions - GREAT FALLS, Mont. (July 6, 2020) - James Setters has finished first in each of the last five races he has been on the track at Electric City Speedway, where he swept the night last Friday during a Rocky Mountain Sprint Car Series event.

Setters guided the Mike Quigley owned sprint car to heat race and feature triumphs for the second straight week. In fact, the only time Setters hasn't won while competing this year was during the heat race of the season opener when he placed second.


"We put all Slade Shock Technology shocks on last Friday and it was much more consistent," he said.

Setters won his heat race from the pole position to earn a spot into the feature redraw. He then pulled the No. 2 to line up on the outside of the front row for the main event.

"It started raining after my heat and soaked the track," he said. "Mike brought the track back in and made it runnable. It was throttle down.

"I was running the middle to top. (Tim McCune) peaked his nose in going through traffic. He almost got by me, right up to the side of me. I had the moisture and he was in the slime so I got the run down the straightaway."

Setters survived the one close call and led the distance to remain undefeated in three feature races this year.

"I adjusted my line to figure out how to get through traffic," he said. "It was so fast that if you didn't really trust your car you'd be slower."

Setters will take the next two weeks off before returning to Electric City Speedway on July 24.