Shirley Goes Flag-to-Flag for Win No. 2 at Lake Ozark 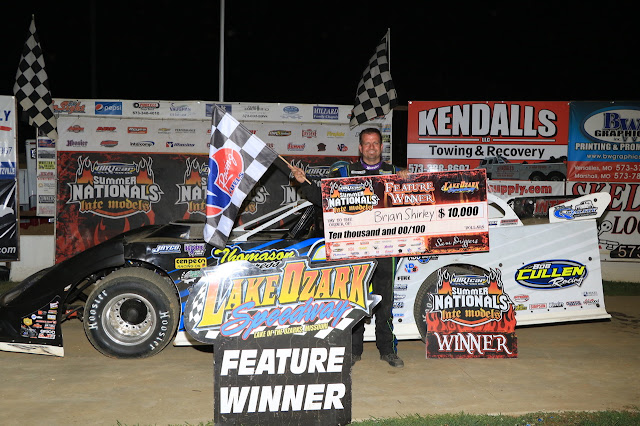 ELDON, MO – July 24, 2020 – He’s not a driver that particularly concerns himself with points battles, but Brian Shirley has just put some more padding on his venture to capture a fourth DIRTcar Summer Nationals points title with a Feature win Friday night at Lake Ozark Speedway.

Shirley started on the outside pole of the Feature after a win in his Heat Race and took off like the Rocket Chassis #3s underneath him at the drop of the green, setting a rapid pace like he did the night before in Springfield. Only this time, he was not going to be outdone.

For 40 laps, Shirley led the 23-car field around the third-mile oval without a serious challenge for the spot until just after halfway, when six-time Summer Nationals champion Billy Moyer got a good run to his inside but couldn’t make it work as they crossed the stripe to complete Lap 22.

Meanwhile, Frank Heckenast Jr. was making his presence felt inside the top-five, trying to close on a 62-point gap to Shirley coming into Friday night. Heckenast ran most of the race chasing down podium finishers Billy Moyer and Jesse Stovall, coming home with a fourth-place finish. Shirley will thicken his points gap going into Saturday night, but over half of the races are still yet to be contested.

Just ahead of Heckenast was a tremendous battle for the runner-up spot between Moyer and Stovall. The two traded slide jobs for position, but Stovall wrestled the spot away for good inside of 10 laps to go.

Back at the head of the field, Shirley appeared to be on cruise control, taking the checkers by upwards of 2.5 seconds for his second Hell Tour victory of 2020 and 28th of his career.

In Victory Lane, Shirley echoed his ever-present mantra that everyday excellence and effort for each race on the Summer Nationals schedule is the clearest path to a points championship title.

“There’s a long time before you’ve gotta worry about points,” Shirley told Summer Nationals Announcer Ruben Mireles in Victory Lane. “Frankie [Heckenast] and [Jason] Feger and all them guys are doing a really good job, so we’ll just try and do our best each night.”

After making big strides last weekend with his thriller of a victory at Highland, it first looked as though Jason Feger was going to have another rough ending to his Friday night after suffering a flat tire just past halfway. However, The Highside Hustler was able to rebound before the checkers, climbing back to a 10th-place finish.

The DIRTcar Summer Nationals Late Models are back in action Saturday night at Clarksville Speedway in Clarksville, TN, for the first of a two-day special – $10,000-to-win on Saturday and $5,000 on Sunday. Both days of action will be broadcasted live on DIRTVision – get yourself a Fast Pass subscription today for just $39 a month.