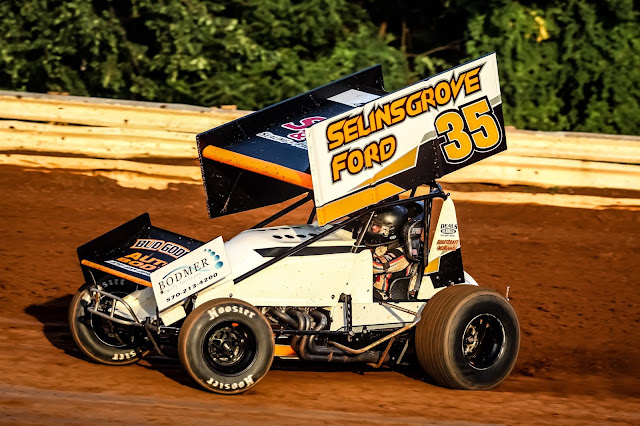 Andy Haus of Hamburg took the win in the Summer Championship for super late models, also pocketing $3,000 for his 25 laps of work while holding off Jeff Rine.

The victory was the third of Haus’ career at the speedway.

The Roadrunner 20 was taken by 19th starter Jake Jones.

The first lap of the 25-lap Summer Championship for super sprints was red flagged when front row starter Anthony Fiore got sideways in the third turn while running third and collected sixth starter Dylan Norris.

Shultz then started the race second and took the lead over fourth starter Mark Smith on lap one.

But before Shultz could settle into a rhythm, the yellow flag appeared on the second circuit.

Reinhardt rocketed into third when action resumed while Shultz pulled away, entering the rear of the field on the ninth circuit.

At the halfway point, Shultz was well out in front while Smith and Reinhardt raced hard for second spot.

A yellow flag with eight laps to go wiped out a near one-second lead held by Shultz and it placed Reinhardt on his tail for the new green after taking second the lap before.

Reinhardt tried to take a look down low in the first turn when green reappeared but Shultz jetted away on the cushion and had a 2.3 second lead with three laps to go when a final yellow flag bunched the field.

Shultz pulled away to the win over the final one and one-half miles of the event to take the victory by 2.064 second over Reinhardt, ninth starter Dylan Cisney, Smith and 11th starter Justin Whittall.

Heats went to Dietz and Norris.

The start of the super late model main was stopped when eight cars connected in the second corner on the opening lap.

Polesitter Any Haus took the lead over Tim Wilson upon the completion of the first lap with Ken Trevitz in third.

Haus had just entered traffic on the sixth tour when a caution flag cleared the track in front of him and Rine took second away from Wilson on the restart by darting underneath in the first corner.

Another restart on lap eight put Rine on Haus’ bumper for a restart but Haus got away and had a near two-second lead at the halfway point.

A caution flag with 10 laps to go erased a 2.056 second lead held by Haus but he built that same margin up again when action resumed by pulling away from Rine, who failed to challenge for the win.

Second starter Curtis Lawton led from the start until lap 18 of the Roadrunner 20 when 19th starter Jake Jones got by for the lead and win.

Lawton had withstood numerous restarts, racing with Terry Kramer for control before Jones moved into second.

The win was Jones’ third at the track this season and he took home $1,0000 for the win.

Keith Bissinger, involved in an early race accident, came back for third.

Heats went to Will Brunson and Lawton.