WHAT TO WATCH FOR: First Ohio stop sets stage for star-studded Brad Doty Classic The World of Outlaws returns to Attica Raceway Park as the points battle tightens 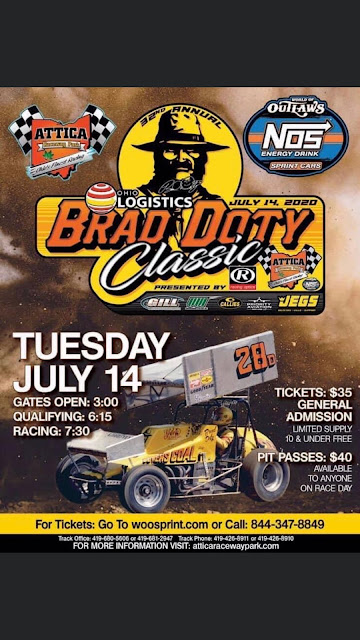 ATTICA, OH – July 13, 2020 – The winged warriors of the World of Outlaws NOS Energy Drink Sprint Car Series will invade Ohio for the first time in 2020 at Attica Raceway Park on Tues., July 14.

Along with the Outlaws already in attendance, the event will attract the best Sprint Car drivers from across the country as they’ll look to write their name in the history books and claim the $10,000 top prize.

With the 2020 season reaching its halfway point, every win and position means more than ever as drivers hunt for trophies and a championship.

If you can’t be at the track, you can still watch all of the action live on DIRTVision.

Here are the top storylines to follow throughout the event:

Schatz and his Tony Stewart/Curb-Agajanian Racing team have begun to find some momentum, picking up two second-place finishes in the last three races. In his last race at the Terre Haute Action Track, Schatz charged from 23rd to second in the 30-lap event. Attica Raceway Park is a good track for Schatz, too. He has four wins at the raceway and is the last driver to win a World of Outlaws event there in 2018.

While Sweet has picked up a pair of fourth-place finishes in his six starts at Attica, his next best finish is 12th. He finished 17th in his last race at the track in 2018. However, he and his Kasey Kahne Racing team have proven they can overcome adversity and win on any track. He’s currently the only driver this year to win at a 1/3-mile, 3/8-mile and half-mile.

SHARK FEST: The Shark Racing duo of Logan Schuchart and Jacob Allen continue to give the Hanover, PA team its best season with the World of Outlaws, so far. Schuchart picked up his fifth win of 2020 at the Terre Haute Action Track and Allen picked up his second top-five of the season during the recent triple-header weekend.

Allen had two top-five finishes in the entire 2019 season and has already matched that with more than 30 races to go in 2020. With another top-10 run at the Terre Haute Action Track, his confidence is high and he’s using that to produce good results.

Schuchart is currently back in the title hunt, sitting third in points – 52 points behind Sweet and only eight points behind Schatz in second. However, he’ll have to overcome his previous performances at Attica Raceway Park. His best finish at the 1/3-mile track is 12th in 2018. The two races prior, he didn’t transfer to the Feature. Tuesday’s event will be another test for the Drydene-backed team.

CONSISTENCY KING: Sheldon Haudenschild, of Wooster, OH, is currently the most consistent driver on the World of Outlaws tour. He’s on a run of 14 top-10 finishes in a row – half of them being top-five finishes in his NOS Energy Drink #17. However, he and his Stenhouse Jr.-Marshall Racing team are still looking for their first win of 2020.

Haudenschild will be on the hunt for a home state win this weekend and his first win at Attica Raceway Park. He finished seventh during his last World of Outlaws visit to the track in 2018.

JJR RESURGENCE: After a few weeks of struggling to find consistency, David Gravel, of Watertown, CT, and Jason Johnson Racing returned to Victory Lane at Wilmot Raceway – their second win of 2020. He backed that up with a fifth-place run at the Terre Haute Action Track the next night.

Now, he and the team return to Attica Raceway Park, where Gravel won in 2017. Gravel and Donny Schatz are the only two drivers on the tour with a World of Outlaws win at the 1/3-mile Ohio track.

BUDDING SOPHOMORE: Carson Macedo, of Lemoore, CA, continues to improve in his sophomore World of Outlaws season with Kyle Larson Racing. He currently sits fourth in points – 88 points behind Sweet – with one win, eight top-five finishes and 18 top-10s in the first 22 races of 2020.

Macedo earned two top-five finishes during the triple-header weekend – including a runner-up finish at Wilmot Raceway. He was on track for another podium finish at the Terre Haute Action Track before a part broke and ended his night. Attica Raceway Park could be another good track for Macedo, too. He finished fifth during his last World of Outlaws race at the track in 2018. His crew chief Joe Gaerte has also won a World of Outlaws event at Attica in 1993.

STACKED FIELD: The Brad Doty Classic tends to attract a large and impressive field of drivers yearly. Kyle Larson is expected to make his World of Outlaws return after picking up multiple victories in Ohio already the past couple of weeks. And 72-time World of Outlaws winner Jac Haudenschild, of Wooster, OH, is also expected to compete for a home state win against his son.

Drivers from around the country will converge at the Attica, OH track to see if they have what it takes to compete with the stars of the World of Outlaws.