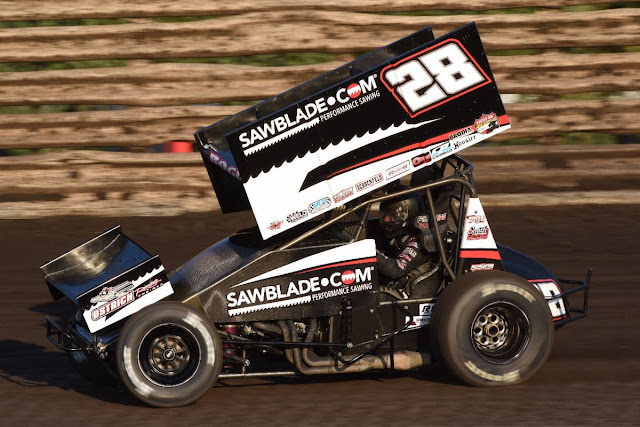 The SawBlade.com backed sprint car driver placed fourth during his preliminary night on Friday before finishing 13th in the finale on Saturday at Knoxville Raceway in Knoxville, Iowa. Both results were career bests for Bogucki.

"It's been the best yet so I'll take that as a good thing," he said. "We had a really, really good car on Friday. That was a better car than we had the night we won there last month."

Bogucki qualified 12th quickest before he powered from fourth to win a heat race on Friday. The feature inversion lined him up on the outside of the front row. Bogucki ran second for nearly the entire race before a late-race restart dropped him two positions to a fourth-place result.

However, he earned enough points to rank 10th out of the nearly 100 competitors. That gave him the 10th starting position for Saturday's A Main.

"I got us too tight and that was my fight," he said. "But I think that was the best quality 360 Nationals field ever. I think there were only three dedicated 360 sprint car teams to make the A Main and we were one of them so that is pretty good."

Bogucki, who salvaged a 13th-place effort, ventured to Southern Iowa Speedway on Sunday for the Sage Fruit Ultimate Challenge presented by Searsboro Telephone Co. with the Lucas Oil ASCS National Tour. He started last in a heat race - ninth - and gained four positions to place fifth. A fourth-place finish in a qualifier locked him into the main event. Bogucki capped the night by advancing from 13th to ninth in the A Main.

"That place isn't the raciest place," he said. "I got lucky and a couple of guys fell out in the heat race. I was okay and we passed a couple as well. Come feature-time we had a good race car and moved forward so that's always good."

Bogucki will shift focus to 410ci sprint car competition as he will compete with the World of Outlaws NOS Energy Drink Sprint Car Series this Thursday through Saturday at Knoxville Raceway during The One and Only and the 9 th annual Brownells Capitani Classic presented by Great Southern Bank.

Thursday through Saturday at Knoxville Raceway in Knoxville, Iowa, for The One and Only and the 9th annual Brownells Capitani Classic presented by Great Southern Bank with the World of Outlaws NOS Energy Drink Sprint Car Series