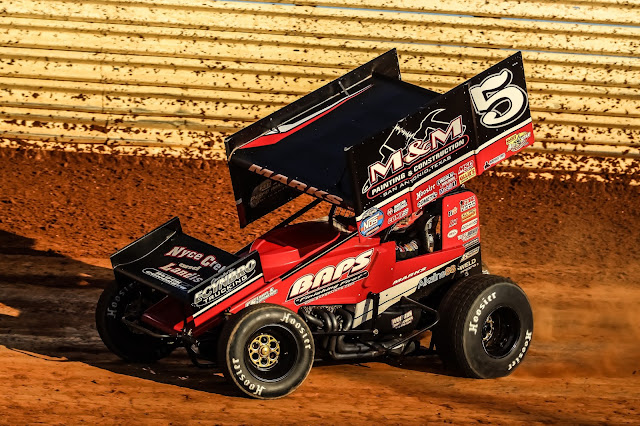 Marks was 4-seconds behind Jared Esh when he took over second, but quickly tracked him down in lapped traffic using a fourth turn slider to grab the lead after slight contact. He drove away from there to a convincing 3.3-second win -his first of the season. His ninth career speedway win was worth $4,044, plus a $400 bonus for being the hard charger. He also received a $300 bonus for coming from ninth to win.

“Finally,” a relieved Marks said in victory lane. “It’s been one heck of a year. We’ve been fast all year long, but couldn’t quite get it in victory lane. Tonight, I wasn’t letting anything stop me. This car was awesome all night long. It all worked out great for me tonight.”

“He was a contributor to the sport and meant a lot to a lot of people and it’s an honor to win this race,” Marks said of Hershey.

Esh started second with Nicole Bower on the pole for the 25-lap main event. Esh grabbed the lead and streaked away from the field building a straightaway lead.

Meanwhile, Marks was racing forward from his ninth starting spot and was in a three-car battle for fourth. Esh quickly began lapping slower cars.

Marks secured fourth and quick passes of Kyle Reinhardt and Bower moved him into second with nine laps completed.

Esh was racing in heavy traffic with Marks closing quickly. Marks threw a huge slider at Esh as they raced into turn three. Marks cleared the pass with slight front end contact with Esh in turn four on lap 12.

“I was getting super aggressive,” Marks said. “I’m sure they were close slide-jobs, but you have to do that to win this deal. You can’t let them have the opportunity to get back by you. It’s awesome to be a winner in the CJB Motorsports car.”

“I would have liked to come out on top, but I’m very happy this is the first feature I got to run in this car,” Esh said of the Chiappelli 98. “Marks was in another league and Logan was good as usual. Right out of the box, we seemed to have decent speed. We were lucky in our heat race, some guys wrecked out which helped us get a handicap spot.

After spending years on the road, Marks turned back into a central PA regular this season.

“With the way things worked out with COVID this year, we had to change our schedule,” Marks said. “Most of the big racing is happening in Pennsylvania, so we decided to focus on this part of the country. This car is going to be fast anywhere we go now. Things are starting to come together. We’re fast every time we hit the track.”

Now it was Marks driving away from the field with the right rear up against the cushion. Eighth starter Logan Wagner took second from Esh with eight laps to go.

“We let Brent get by us early and that ultimately cost us the race,”

Wagner said. “Curt Hershey was a great guy. He propelled me to where I am today.”

Heat races for the 30 cars were won by Logan Wagner, Mike Wagner, and AJ Flick. Tyler Reeser won the B-main.

Roy Deese led the opening lap of the 25-lap late model feature over Trevor Feathers and Dillan Stake. Gregg Satterlee moved by Stake and into third.  Feathers stayed within striking distance of the leader as they closed on slower traffic by the half-way point.

The yellow flag flew keeping them out of traffic. The red flag was displayed as Stake’s car had a fire under the hood when he stopped on the frontstretch. He was okay.

Feathers ducked under Deese on the restart, but couldn’t make the pass with Satterlee lurking in third. Deese began to pull away following the challenge. Satterlee took second from Feathers with five laps to go.

Another yellow erased a 2.4-second lead for Deese.

Feathers car broke entering turn three on the restart bringing out the yellow. He had been racing third.

Satterlee tried the bottom on Deese on the restart, but Deese was fast thru the middle. He got a little too high the next lap giving Satterlee an opening. He shot under him entering turn three. They raced side-by-side down the frontstretch with Satterlee securing the lead in turn one.

He drove away from there for his fourth win of the season worth $2,544 and a guaranteed starting spot in the Frank Sagi race at Hagerstown.

A nasty backstretch crash involving Derek Hauck marred the start of the 20-lap main event for the 305 Sprints. Doug Dodson got collected in the crash as well. All drivers were reported okay.

Point leader Garrett Bard raced into the lead over Justin Clark when the race resumed. He cruised to his third win of the season over Clark.

Clark’s car failed post-race tech and he was disqualified.